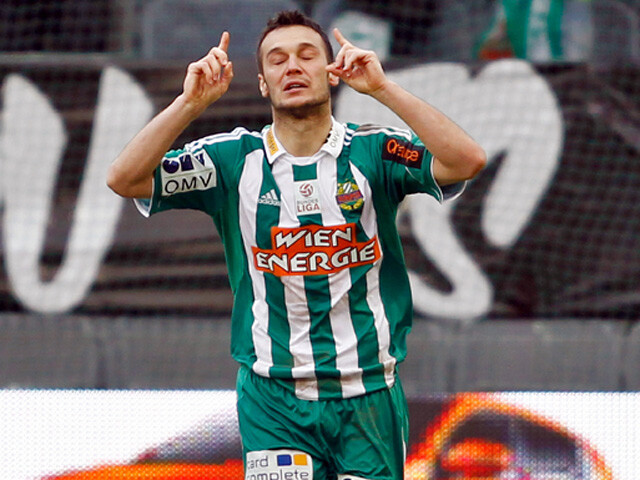 Sunday’s match at the Hanappi saw the visit of SV Ried. The Upper Austrians arrived in Hütteldorf in confident mood and sitting pretty in the Bundesliga. The match took on extra importance for Rapid, as they looked to bounce back from tuesday’s Burgenland disappointment against Mattersburg. With a trip to Favoriten looming next week, three points would provide the perfect tonic and get things back on track. Flying start for RapidBoris Prokopic started in the middle of the park for the Hütteldorfers, while Hamdi Salihi joined Rene Gartler in attack against his former club. With only 8 seconds on the clock Rapid drove forward from the kick off and a decent effort from the recalled Salihi forced Ried keeper Gebauer into a diving save. Despite the early signal of intent, it was the visitors who settled the quickest and looked more likely in the opening five minutes or so. Following a period a scrappy play, Salihi latched onto a beautifully weighted Hofmann through ball and lobbed the stranded keeper to hand the Green-Whites the early impetuous with just over a quarter of an hour on the clock. It was just the shot in the arm Rapid required as energy flowed back onto the pitch and into the stands. A smart bit of play from Hofmann on the right wing created space for a cross which was met by Gartler, his header lacking the placement to trouble keeper Gebauer. Just seconds later the visitors broke forwards as, as if to remind the home faithful that they were still a potent force. A low cross found its way to Royer in a glorious position, but his weak shot failed to capitalise on the situation. Rapid weather the stormMario Sonnleitner had to be on his toes in the 30th minute as Carril threatened to get in behind the Rapid back line, the central defenders timely intervention was good enough to keep the visitors at bay. Ried nearly snatched an equaliser 5 minutes before the break as a Lexa cross drifted dangerously towards the top corner and required a tip onto the bar from Payer. The visitors were growing in confidence, Rapid just needed to see it through to the break and regroup. A long ball from back to front nearly played in Guillem, but Soma managed to recover, close the angle and force the striker to shoot wide of the target. The whistle went and Rapid had seen off the difficult period.Lightning SalihiThe early threat from the first half was on display again at the start of the second, only this time it bore fruit. An early Drazan cross caught the Ried defence napping and Salihi stole in to bag his second of the afternoon with a close range header just one minute into the second half. Ever reliable Stefan Kulovits came on to replace Prokopic, who appeared to be struggling with a back injury, 10 minutes into the second half. Rapid then nearly made the game safe moments later Markus Katzer met a Steffen Hofmann free kick with a good connection but guided his header just over the bar. Valuable three pointsJust as Rapid appeared to have taken a grip on proceedings, a lapse in concentration from Soma allowed Carril to nip in, but he screwed his shot wide from just a matter of feet. In the 70th minute Salihi nearly picked up his third of the afternoon. The Albanian striker picked the ball up and ran at the Ried defence from deep, beat a couple of players, but then screwed his shot wide from an excellent position having done all the hard work. A bad tempered passage of play ensued, before captain Steffen Hofmann came off in the 78th minute to be replaced by Christopher Trimmel. Close to 80 minutes represents a good return for the skipper, who is still looking to get back to full fitness following his long lay off. Atdhe Nuhiu was introduced for Gartler with a little over five minutes to play. Kayhan went close to adding some gloss to the score line in the 89th minute, his rasping 25-yard drive just shaving the crossbar with Gebauer merely a spectator. Rapid closed out the game with a minimum of fuss to claim a valuable three points. One sour note for Peter Pacult were the yellow cards for Kayhan and Heikinnen which rule the pair out of next weeks trip across town. 24th round:SK Rapid - SV Ried 2:0 (1:0)Hanappi-Stadion, 14.600, Referee Schörgenhofer. Goals: 1:0 Salihi (15.), 2:0 Salihi (46.) SK Rapid: Payer - Kayhan, Sonnleitner, Soma, Katzer - Hofmann (78. Trimmel), Heikkinen, Prokopic (54. Kulovits), Drazan - Salihi, Gartler (85. Nuhiu) SV Ried: Gebauer - Stocklasa, Glasner, Prettenthaler - Brenner (67. Hammerer), Hadzic, Schrammel - Lexa (83. Sammer), Carril (69. Hackmair), Royer - Guillem Yellow Cards: Hofmann, Katzer, Heikkinen, Kayhan Carril, Prettenthaler, Glasner (gw)