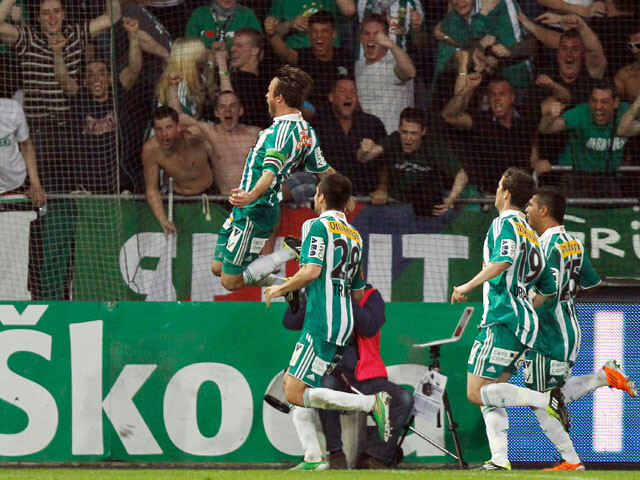 Saturday's top of the table clash between Rapid and Sturm Graz looked set to live up to it's billing as the weekends top offering in the tipp3-Bundesliga. Peter Pacult went for a 4-2-3-1 formation for the crunch clash, with midweek scorer for Albania Hamdi Salihi leading the line for the Green-Whites. Emotions were running high in the stands ahead of what looked a mouth-watering encounter. Hectic OpeningAs early as the 10th minute the deadlock was broken. A simple through ball bisected the high Rapid back line and Szabics raced onto the pass before squaring to Patrick Wolf to open his account for the&nbspGraz' side, tapping into an empty net from 15 yards. The goal did little to dampen Rapid spirits though, and the ever-dangerous Christopher Trimmel was heavily involved as the Viennese leveled matters just moments later. The young winger drove in from the right flank, his blocked shot fell to Boris Prokopic. In the right place at the right time, Prokopic made no mistake and converted from a matter of yards to give Rapid a 12th minute repost. Trimmel then did his best to force the Hütteldorfers into the lead, seizing onto a Perthel mistake before squaring to Steffen Hofmann. For once the Rapid skipper's class deserted him and he failed to find meaningful contact. Rapid turn the game on it's headA snappy Rapid outfit were doing well in the midfield, denying the opposition room while recycling possession themselves in a very efficient manner. The positive play was rewarded in the 34th minute: a defence splitting Hofmann pass was latched onto by the irrepressible Trimmel whose initial shot was blocked. The ball rebounded to the winger whose effort was this time blocked by Sturm man Schildenfeld's arm. Clear penalty, although surprisingly only a yellow card for the Sturm skipper. Hamdi Salihi stepped up to the spot and no mistake, drilling the ball confidently into the roof of the net giving the Sturm keeper no chance. Goalscorer Prokopic was replaced by hardworking Stefan Kulovits at half time. Typical Hofmann makes it 3:1 with magic set pieceThe second half got off to a perfect start for Rapid: after just 10 minutes Mevoungou brought down Kulovits on the edge of the box, skipper Steffen Hofmann stepped up and bent an unstoppable effort round the wall and into the right hand side of the goal. It was a magic effort from the mercurial talisman that looked to have given Rapid one hand on the win. It wasn't to be though as Pacult's men suffered a quick double blow: Szabics pulled one back for the hosts, his powerful finish capping off a slick passing move. And just seconds later Roman Kienast found space in the Rapid box to get on the end of a cross and level proceedings with a close range header. This time it was Sturm who turned the game upside down, wiping out a two-goal deficit in the space of just 2 manic second half minutes. Despite controlling large chunks of possession, the Green-Whites failed to turn domination of the ball into clear-cut chances. After 93 minutes the game came to end, and although three points were there for the taking, it was really a spectacle to behold and both sides played their part in the game of the year so far. Next weeks match sees the return encounter with the visit of Sturm to the Hanappi.27. Runde:SK Sturm Graz - SK Rapid 3:3 (1:2)UPC-Arena, 15.323,&nbspRef. GanglGoals: 1:0 (10.) Wolf, 1:1 (12.) Prokopic, 1:2 (34.) Salihi (Penalty), 1:3 (55.) Hofmann (Freekick), 2:3 (58.) Szabics, 3:3 (60.) KienastSK Sturm: Cavlina - Standfest, Schildenfeld, T. Burgstaller, Perthel - Wolf (88. Ehrenreich), Mevoungou, Weber, Salmutter (59. Haas) - Kienast, Szabics (83. Klem)SK Rapid: Payer - Kayhan, Sonnleitner, Soma, Katzer - Heikkinen, Prokopic (46. Kulovits) - Trimmel (92. Nuhiu), Hofmann, Drazan - SalihiYellow Cards: Wolf, Schildenfeld, Standfest, Mevoungou, Perthel(gw)