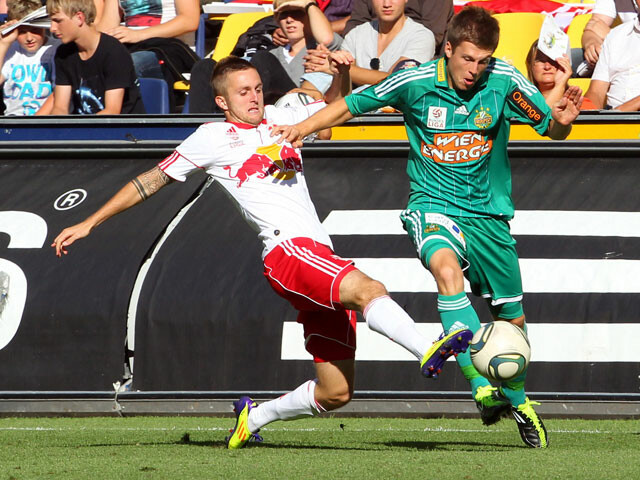 Round six of the Tipp 3 Bundesliga pitted Austrian heavyweights RB Salzburg and our squad together. In the glorious summer sunshine, this heated clash was further warmed up by the news that Stefan Maierhofer would be lining up against his former club. Another ingredient to further stoke the fire, as if one was required. The wounded Huetteldorfers, still reeling from events last Sunday, lined up with Helge Payer in goal and a back four consisting of Schrammel, Sonnleitner, Soma and Schimpelsberger. Further up the pitch were Trimmel, Heikkinen, Pichler and skipper Hofmann, while Alar and Salihi would be looking to provide the goals. After a few nervous moments in the opening stages the Green & Whites began to come into their own: Steffen Hofmann split the Red Bull backline but Eddy Gustafsson came out on top in his 1 on 1 duel with Hamdi Salihi in the 4th minute. Just two minutes later Salihi was again denied by the Salzburg keeper following a mix up in the home sides defence. It was a refreshing showing from the Viennese following the lop sided Derby defeat just a week earlier. Rapid on topThe next Rapid player to be denied by the hosts on form Swedish stopper was Steffen Hofmann. The Rapid captain’s tenth minute effort looked bound for the top corner before being miraculously pushed to safety by the opposing captain. The men from Hütteldorf were looking strong and dangerous while by comparison the table topping hosts were looking nervy, trainer Ricardo Moniz cut a frustrated figure as he tried to get his side’s error strewn performance back on track. Rapid old boy Stefan Maierhofer threatened briefly for Red Bull 10 minutes before half time, but it was Rapid that looked the more likely and were still playing the better football, manufacturing more opportunities. The home side nearly snatched an undeserved lead on the stroke of time though when a back pass to Payer went horribly wrong, as did the keepers’ first touch. Luckily Rapid survived what would have been a cruel blow and went into the dressing room as far the happier of the two teams. Momentum shift in second periodThe certain “hairdryer treatment” suffered by Salzburg at half time appeared to make little difference as Rapid emerged again as the stronger of the two outfits. It was the hosts though who threatened next: 10 minutes after the restart Jantscher just failed to convert a swift counter attack. Blood and guts replaced skill and tactics as the half wore on, neither team willing to give an inch, competing ferociously for every 50/50 and loose ball. Rene Gartler replaced Salihi in the 65th minute as Peter Schöttel looked to inject fresh impetuous into his side. Alan and Jantscher offered consistant threat for Salzburg, and as the game neared the last quarter of an hour it had become anyone’s guess as to who may snatch the three points. In the dying embers of the game the hosts finally got on top. A few scrambled chances and heart in mouth moments followed for the Green & Whites but the score line still remained 0:0, neither side able to make the crucial breakthrough. Ten minutes before the final whistle, sensing the shift in power, Schöttel sent on Katzer for Alar to shore up the Rapid defence. Schrammel’s full-blooded long-range effort threatened to flip the run of play on its head in the 83rd minute, but Gustafsson parried the ball to safety. Nuhiu came on for Hofmann in the hectic closing stages but failed to do what hadn’t been achieved in the previous 88 or so minutes and find the breakthrough. Rapid had taken Red Bull Salzburg to the cleaners in the first half, and created many of the best openings in the second. On the back of last weeks Derby performance it was a very positive display that could have easily yielded all three points. tipp3-Bundesliga powered by T-Mobile, 6th round:RB Salzburg - SK Rapid 0:0Red-Bull-Arena, 15.500, Referee EisnerRB Salzburg: Gustafsson - Schiemer, Pasanen, Hinteregger, Svento (7. Jefferson/46. Sekagya) - Jantscher, Leitgeb, Lindgren, Zarate (71. Leonardo) - Maierhofer, AlanSK Rapid: Payer - Schimpelsberger, Sonnleitner, Soma, Schrammel - Heikkinen, Pichler - Trimmel, Hofmann (90. Nuhiu), Alar (80. Katzer) - Salihi (65. Gartler)Yellow Cards: Pasanen, Jantscher, Zarate Schrammel, Heikkinen, Schimpelsberger, Pichler(gw)