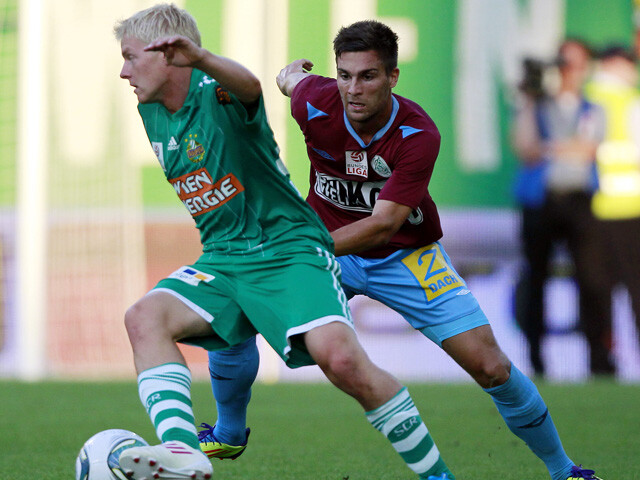 Around 14,000 Rapid faithful filled the Hanappi Stadium, and the noise began to once more flow from the terraces as the ground resembled the Hanappi of old. The first surprise of the afternoon came in the form of reserve goalkeeper Jan Novota taking to the field in place of Helge Payer: The Rapid number 1 had failed to fully recover from a knock sustained in training. The second surprise was how busy Rapid's Slovak number 2 was. Mattersburg came out of the traps much the quicker of the two sides and really took the game to their lethargic hosts. Frenetic support rained down from the stands but with Deni Alar again out on the left and Prager on the field, Rapid were making a weak impression on the pitch. The quality failed to improve as the half wore on but one moment of relief came from the guests from Burgenland: Domoraud broke through and could have done better in the 23rd minute. Other than that Rapid were being limited to long range - set piece efforts from captain Steffen Hofmann, the best of which went narrowly over in the 28th minute. The match was turning into a turgid affair, with mistakes littering the game and very little class on show. The Rapid back line was offering plenty of gaps for Mattersburg to exploit so Mario Sonnleitner suffered the ignominy of being replaced by Jürgen Patocka during the first half as Peter Schöttel looked to steady the shaky ship. Mercifully the referee put an end to first half proceedings after another Hofmann free kick failed to hit the target. Hopefully Schöttel would be able to mastermind a vast second half improvement. The ineffective Prager failed to emerge for the second half, replaced by another "striker by trade" Rene Gartler. Rapid now had 4 strikers on the pitch. Naumoski came on for Domoraud in the only change for the visitors. Two further free kicks came and went for Rapid but then in the 54th minute it looked as if salvation had arrived through Christopher Trimmel. Mattersburg keeper Schartner flapped at a Deni Alar cross from the left and the ball fell to the waiting Trimmel who dispatched it into the net from 12 meters. Now surely Rapid could up their game and go on to collect the points. Only ten minutes later Mattersburg captain Mörz poured cold water over whatever good feeling may have been in the Hanappi by converting a cross from close range and squaring the afternoon for the visitors. The last placed visitors, buoyed by the goal, looked the more dangerous of the two sides once again, coming forwards and committing men into attack. Schöttel brought on Christopher Drazan for Hofmann as he looked to spark some life and forward momentum into his ailing side. As the game enter the final stages, Rapid did look a bit more lively and managed to fashion chances for Alar and Trimmel, neither of which looked like being converted. It was the visitors who came closest to claiming the three points: firstly as Seidl's goal bound effort deflected of his own player and over to safety, then again as Bürger's powerful drive was punched away by Novota in the 86th minute. Referee Hameter signaled for a further 6 minutes of injury time but the substantial addition did little to aid Rapid's cause as they failed to muster the required opening. Both teams had to settle for a point on a largely forgettable evening in the Hanappi. Tipp3-Bundesliga powered by T-Mobile, 7th round:SK Rapid - SV Mattersburg 1:1 (0:0)Hanappi-Stadion, 15.200, Referee Markus HameterTorfolge: 1:0 Trimmel (55.), 1:1 Mörz (65.)SK Rapid: Novota - Schimpelsberger, Sonnleitner (40./Patocka), Soma, Schrammel - Trimmel, Heikkinen, Prager (46./Gartler) - Hofmann (74./Drazan), Alar - SalihiMattersburg: Schartner - Farkas, Malic, Mravac, Pöllhuber - Höller, Seidl, Ilsanker, Mörz (86./Spuller), Domoraud (51./Naumoski) - Bürger (92./Rodler)Yellow Cards: Heikkinen Malic, Bürger, Domoraud, Naumoski (gw)