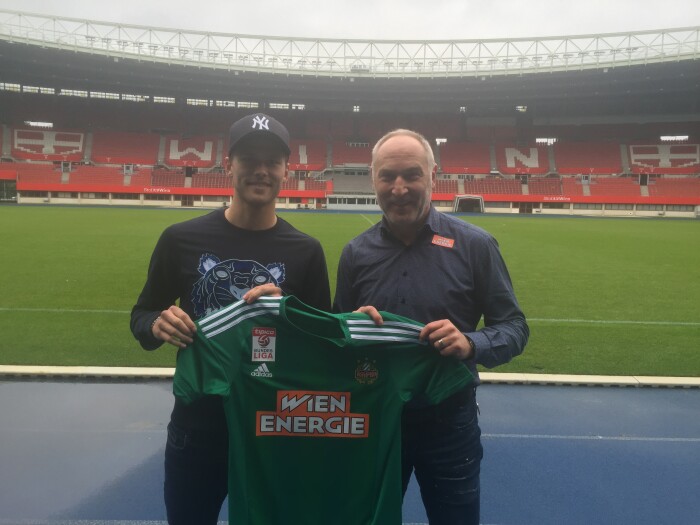 The ink on the contract has dried, and Icelandic International Arnór Ingvi Traustason has made the switch to Hütteldorf. Over the past weekend Sporting Director Andreas Müller along with the Rapid management team reached an agreement with his club IFK Norrköping in addition to agreeing personal terms with Traustason himself. The player, who has signed a contract tying himself to the club until 2020, had again publicly stated his wish to come to Hütteldorf and now the winger has got his move.

Andreas Müller has had his say on the club's latest recruit: "Traustason is an agile and technically gifted player, who is adept in a number of different attacking roles. I think our style suits his game. On one hand he is comfortable joining in build-up play, but can also finish and has a great shot. His desire to join the club also convinced us to press ahead with the transfer. He knows exactly what he wants, is clear in his head and has a top mentality", explained Müller, who added: "Arnór additionally has international experience and is in the Iceland squad for the Euro’s for a reason. In the past year he has also learnt what it takes to win titles, and as that’s what we are striving for here at Rapid so he’s also perfect for us in this regard."

Head Coach Zoran Barisic is equally delighted with his new signing, the first Icelander to join the club since Gudmundur Torfason in the late 1980's: "With Traustason we have landed one of our top transfer targets. He’s a player with enormous attacking quality, incredibly athletic and has a great motor, is technically sound, and has continued to develop enormously over the past years. His potential is still huge and he’s going to be a massive addition for us. As I began to find out about him from Helgi Kolvidsson (former Ried, Wiener Neustadt and Austria Lustenau Trainer), Trautason had also been approaching him about us. I’m delighted that foreign players are taking note of our club and that we now have the chance to sign players of this calibre. That he publicly stated that Rapid was his preferred destination is a sign that he is going to fit in straight away and deliver the performances that we expect of him", explained the 45-year old Rapid Trainer.

Talking about his transfer Traustason said: "I'm so happy that everything is boxed off. I’m looking forwards to Rapid, in winter interest was already there from both sides, but with the forthcoming European Championships in mind I decided to remain at Norrköping until the summer. But the interest from Rapid remained and it convinced me that the club really wanted to sign me. I was convinced also that this great club represents the right move for my career. I know about the great history of Rapid and wanted, without question, to become a part of that. I want to win titles and cups, and based on what I’ve heard that’s also the demand from Rapid and their fans."