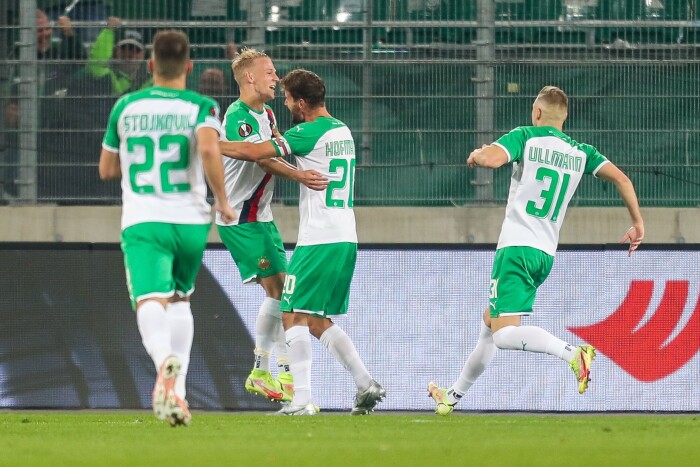 A challenging duel was on the agenda for our Green & Whites on Thursday evening. In the form of Dinamo Zagreb we welcomed the Croatian record champions to Hütteldorf on the third matchday of the UEFA Europa League, with three points separating us in the table. For Rapid, there was clearly just one goal: to get our first points of the group stage in the bank. With one look at the advance ticket sales numbers, you could tell that this was going to be a very special European night, one to savour!

Our team started the game by applying a lot of pressure, and even in the first few minutes there was a fighting spirit and a real will to win in the air. The first chance came as early as the 6th minute when Fountas passed into the middle on a three-man break, but Kara's shot was unfortunately too close to the keeper. It only took until the 10th minute for our fans to celebrate though: Arase was outstanding as he retrieved a bouncing ball in the corner, dribbled past defenders on the right, and slid the ball over for Grüll in the middle. From a good position in the box, he just had to strike it cleanly to put the ball into the far corner, and he duly delivered - GOAL: 1-0! What a start, but could we maintain the high level? Only three minutes later the next chance came for the Hütteldorfers, Aiwu passed to Kara, who was well blocked by the goalkeeper in a one-on-one situation (13’).

Our Croatian counterparts then came more and more often towards the Rapid goal, and in the 24th minute the equaliser came out of the sky, as a well-timed run saw Dinamo latch onto a high ball back into the box, and finish well for 1-1. Our team responded very well, and the next top chance came from Kara, whose strike missed the goal by just millimetres after a perfect pass from Fountas (30’). In the 37th minute, everything fell into place: Grüll swung in a free kick towards Hofmann, who rose up at the right moment from the near post and headed the ball into the net, leaving the Dinamo defenders helpless - there it was, the deserved goal to go back in front: 2-1! Another goal almost came our way five minutes later, but the visiting goalkeeper was able to claw a Grüll free kick just out of the bottom corner (42’). Maxi Ullmann also put his stamp on the first half when he narrowly missed the target with a beautifully executed volley (44’). After an intense first half, the team went into the changing rooms holding a 2-1 lead.

Our boys came out for the restart full of energy, and in the 46th minute Arase looked ready to grab us a third goal, but he just missed the chance. Until the 68th minute, there were no big chances for either side, until Kara tried his luck with a nice shot on the turn, which the keeper did well to dive down and save at full stretch. Didi Kühbauer then brought some freshness into the attack as Ballo came on for Fountas (69’). At the beginning of the Rapid quarter hour, the ball almost ended up in the opponent's net once again, but another Hofmann header went past the post (75’). Only two minutes later, Grüll tried again with a shot at the near post, but the goalkeeper was able to come up with the save (77’). As the minutes went by, the emotions came to a head and the referee ended up having a lot to do. Late on, we made a double substitution: Kitagawa came on for Kara and Arase made way for Schick (89’). Then we had a moment of shock: Aiwu and Hofmann came together with a nasty clash of heads at full force. Our captain had to leave the field with an open wound - Wimmer came into the action for stoppage time (90’). Despite all the heated emotions in the final phase, the game was all over after 94 minutes!

After a strong and passionate performance, our boys were rewarded with a 2-1 home victory and a well-deserved three points. What a game! Now we have to take the momentum with us, rest, recover and keep going so that we can build on this performance when we face TSV Hartberg on Sunday. BRAVO lads, that's the way it’s done!