After a two-week international break, Rapid visited Austria Klagenfurt for the 11th round of the ADMIRAL Bundesliga at the Wörthersee-Stadion. The batteries were fully recharged for this clash, and it had a special element about it too, as it was the first encounter in the Bundesliga against our former coach from the 2008 title win, Peter Pacult. For our Green & Whites, the only thing that mattered would be a win, three more points, and the chance to climb into the top half of the table.

Fortunately, all of our internationals returned to Hütteldorf fit. Head coach Didi Kühbauer still had to do without Richi Strebinger though, who was not yet ready to play following his shoulder injury. Pauli Gartler therefore started in goal again; Max Ullmann, Maxi Hofmann, Leo Greiml and Filip Stojkovic made up the back four; Robert Ljubicic and Dejan Petrovic added stability as defensive midfielders, with Marco Grüll, Taxi Fountas and Thierno Ballo providing the service for lone-striker Ercan Kara.

Our team started the game with a lot of momentum, and inside a minute Ljubicic sent the ball towards the goal, but it found only the side-netting (1’). The first twenty minutes were pretty even overall, with both sides struggling to create any big chances, but soon after came the first major talking point of the match: The studs of Klagenfurt-captain Mahrer were raised high in a challenge, and landed dangerously on Petrovic's calf - it was a clear red card, and Mahrer was given his marching orders (22’)!

The extra man added a bit of a boost to Rapid, and Fountas advanced with the ball at his feet, but his shot was saved (34’). Just three minutes later he’d have a bit more luck: Ljubicic’s cross was cleared, and when the loose ball fell for our number nine, he controlled with his chest before hammering it goalwards. The volley got a useful deflection on the way, but it found the back of the net for a lovely opening goal (37’)! Unfortunately Petrovic had to be withdrawn at this point following the earlier challenge that he suffered, and in his place came Christoph Knasmüllner (38’). Goalkeeper Gartler would be called into action once before the break, but he came up with a good save to leave us with a narrow lead at half time. 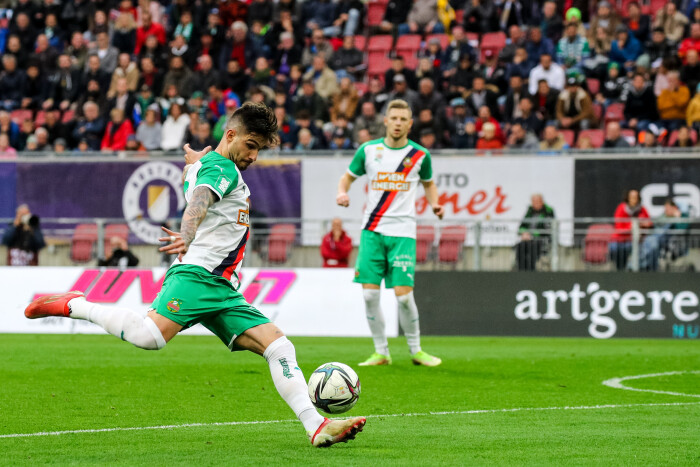 Taxi Fountas opened the scoring with a well-struck volley towards the end of the first half. © GEPA

The second half started with attacking opportunities few and far between for Kühbauer's side, but it didn’t take too long until the Rapid fans were cheering: Fountas burst away down the wing, crossed the ball for Kara to score, but the goal would not stand (53’). Upon closer inspection, a foul had taken place 30 yards away during the build up, and so it remained just 1-0. The tempo increased after that, and the intensity of the challenges grew too, leading to more fouls and tougher duels. Just after the hour mark, Rapid’s next big chance to double the advantage came along. Fountas again provided the cross, this time it was Marco Grüll who was coming in at the far post, but with the goal wide open before him, his volley hit the crossbar (62’).

A double substitution was made with the intent of bringing new momentum to Rapid’s game: Aiwu came on for Ljubicic, Schick for Ballo (67’), and shortly after the change another chance fell for the Green & Whites, but Grüll's attempted finish was just about cleared away (69’). Only four minutes later, Aiwu put a header just over the top, and the domination in terms of chance creation was growing ever more (73’). Just after the Rapid quarter-hour, Grüll made way for Arase and Grahovac replaced goal scorer Fountas (77’), but despite Rapid having the majority of the play, out of nowhere, the ball would find its way into the Green & White goal when Amanda was left enough space to side-foot home from a low cross: 1-1 (87’).

Needless to say, it was more than a bitter taste left in the mouth for Rapid and a brilliant band of travelling fans, especially coming so close to the final whistle. There was no time left for Rapid to turn it around and take advantage of their dominance, and so it ended as a disappointing draw. Now we have to regroup quickly, stick together and focus on the next game, because Dinamo Zagreb will be in Hütteldorf on Thursday to give us a stern test as we look back towards the UEFA Europa League group stage.