On Thursday a pressing challenge awaited our team on the final match day of the UEFA Europa League group stages. With the visit to KRC Genk in Belgium, the goal was expressly clear; a win would be enough to make it past Christmas in Europe with a place in the UEFA Europa Conference League play-off round, anything else and the European dream was over for this season. With a hardy band of away fans in attendance, and the rest with us in spirit, the team aimed to make it a European night to remember.

In Ferdinand Feldhofer’s first European match in charge, Paul Gartler was in goal, but Richard Strebinger finally returned to the bench after a long injury-enforced time out. With Maxi Hofmann still not fit to start, the defence was made up of Max Ullmann, Martin Moormann, Emanuel Aiwu and Filip Stojkovic. Robert Ljubicic and Dejan Petrovic were tasked with the technical defensive midfield roles, as Marco Grüll, Christoph Knasmüllner and Thorsten Schick were further forward supporting lone striker Ercan Kara.

With both teams looking to take the initiative, it was Rapid who established themselves quickest in the early stages, as Knasmüllner was inches away from getting the ball in a dangerous position within the first minute. The first big save came from Genk’s young goalkeeper, as a half cleared cross fell for Grüll who fired low and hard towards the bottom corner before the ball was tipped away (16’). Two minutes later, Stojkovic flicked a precise pass downfield for Kara, but his fierce shot across goal from the right was also parried away strongly.

After winning the majority of the duels and playing brave football, Rapid found their first half reward. With Genk on a rare foray forward, the Green & Whites won the ball back, and countered at lightning pace. Grüll passed to Schick on the right in space, and his angled pass towards Ljubicic on the left found the perfect channel to beat the last defender and hit the stride of his teammate. The first time strike from Ljubicic flew past a stunned keeper and silenced the crowd once it hit the net on the near post side. A superb breakaway goal, and it brought with it a precious advantage in the game! 1-0 to Rapid (30’)! Kara had another good shot from an angle six minutes later, but before the break a foul meant his match was over with an injury, and Oliver Strunz came on to show what he could do in a high pressure situation (40’). Following a very impressive opening 45, Rapid deserved their half time lead, and Genk would surely offer more after the break. 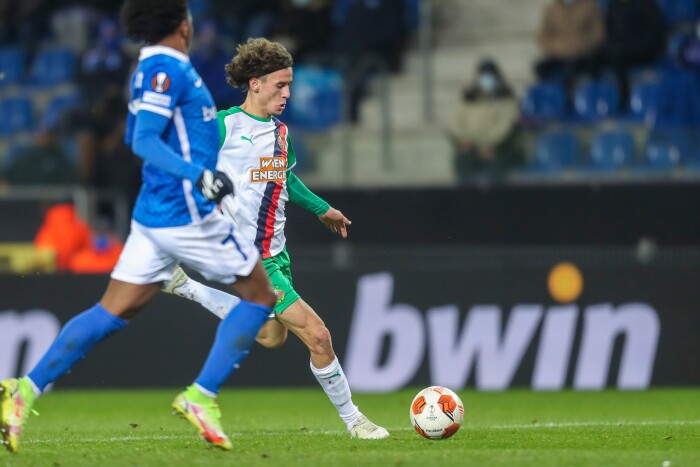 Robert Ljubicic fired in the vital winning goal, which eventually led us to the UEFA Europa Conference League. © GEPA

To begin the second half, Coach Feldhofer made a second switch of the game, bringing on Kohya Kitagawa for Knasmüllner, and Rapid picked up where they left off. A Ljubicic pass found Strunz just after the restart, but he couldn’t get the ball in with his first chance on goal. The improvement from this strong Genk team finally arrived, and before long they were putting Rapid under pressure and testing our defence for the first time in the match. Onuachu’s turn and shot forced Gartler into a diving save (50’) before Thorstvedt’s side-footed effort needed a solid save with the legs (55’) as Genk began to look unrecognisable from the first half.

As the Rapid Quarter-Hour arrived, the Green & Whites were still struggling to get forward even with the aid of some more substitutions, but the team were holding up well against the home team’s advances. A back-pass to Gartler put him in a spot of bother, but he managed to pounce on the ball at the last moment to remove the danger (83’). By this point the tension was rising, and the time was slipping away for the hosts. Six minutes of added time threatened to extend the nervous moments, but in truth Genk never really created as much as they had managed earlier in the second half.

After 96 minutes, the whistle was blown, and Rapid’s achievement was secured! We’ll be in the European pot for Monday’s draw, and the Green & Whites will be playing European football after Christmas! It was a performance full of heart, passion and courage, and it ended with a deserved three points. It was the perfect way to finish our European action for 2021, and now we can all take a deep breath, celebrate the new year, and look forward to the challenge ahead in 2022. The trip back to Vienna will feel better with three points in the bag, and on Sunday Rapid will face one last game of the calendar year, as we make the short trip south to play Admira in the Bundesliga. WELL DONE BOYS!