For the entire week, the derby-day atmosphere had been beginning to build, the butterflies in the stomach were becoming more prominent, until on Sunday, it was finally time for the 334th meeting of the two Vienna rivals. For match day 17 of the ADMIRAL Bundesliga, it was Rapid’s turn to host Austria in Hütteldorf, albeit without the usual cauldron of Green and instead in an empty Allianz Stadium. Nevertheless Rapid were raring to go, aiming for a first win over their city rivals in the new stadium, and also with Ferdinand Feldhofer taking charge of his first game as head coach, and Matthias Urlesberger alongside him in the dugout as assistant manager.

The new coach revealed his anticipated starting XI, and opted for what looked to be an attacking line-up on paper. Paul Gartler was in goal; Maxi Ullmann, Martin Moormann, Emanuel Aiwu and captain Filip Stojkovic made up the back four; Marco Grüll, Robert Ljubicic, Dejan Petrovic and Taxi Fountas were the midfielders; and the front two were Ercan Kara and Christoph Knasmüllner.

Any pre-match excitement evaporated immediately in the game, when the visitors took the lead inside the very first minute through Braunöder’s shot. A nightmare of a start (1’). The early stages remained intense though, and Grüll’s free kick after 10 minutes set up the first real Rapid chance for Fountas, whose effort was only narrowly off target. The next chance also fell to the Greek striker, as a high and deep pass was collected and fired into the side-netting (18’).

Four minutes later came a key moment: Ljubicic was on the receiving end of a foul after a cross, and given that he was inside the area, a penalty was awarded. Kara stepped up to take responsibility, and coolly slotted the ball into the bottom-left corner to equalise! 1-1 (25’)! The Green & Whites retained the upper hand, as Grüll’s free kick from close to 35 yards forced a top save from the visiting goalkeeper (30’). The game became more balanced, but was still full of derby intensity, with both teams fighting hard for every ball. Shortly before the break Rapid so nearly had the lead when Knasmüllner was the next to try from a set piece, but his shot rattled the bar and stayed out (41’). The two sides went in level at 1-1, but there were still 45 minutes left to go one better. 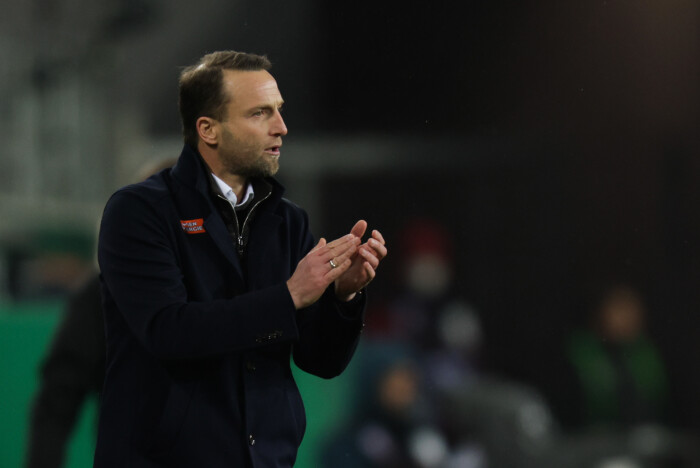 Ferdinand Feldhofer took his place in the dugout as Rapid’s head coach for the first time on Sunday. © GEPA

The energy levels didn’t drop after the break, and Fountas was again the man to threaten, as he sped clear down the wing before shooting towards the near post, where the keeper was able to make the stop (51’). Just over ten minutes later, Aiwu headed over the top, immediately before Kara won the ball brilliantly, only to see his shot saved by the outstretched fingertips of the Austria keeper (64’). Rapid were still pushing for the lead, and Ullmann let fly from long distance, but yet again the keeper got his hands to it (69’).

Kohya Kitagawa came on to refresh the Rapid attack, replacing Grüll (70’), and at the start of the Rapid Quarter-Hour, on came Kelvin Arase for Knasmüllner. Five minutes later it was time for Oliver Strunz and Thorsten Schick to come on in place of Kara and Stojkovic, with ten minutes now left for Rapid to find a winner. Arase headed into the path of Fountas, but he couldn’t get the ball over the line (81’), and in the end that turned out to be the last noteworthy chance of the match, which ended level after 93 minutes.

Despite an intense match filled with challenges and individual duels, the long-awaited derby win was not to be. However, it was a strong performance, and one that the new head coach can build on as he looks to settle in quickly in Hütteldorf. Now, all attention turns to Thursday’s game against KRC Genk, which will be the decider for whether Rapid’s European adventures will last into the new year! LET’S GO!