To get things restarted in the ADMIRAL Bundesliga following the international break, head coach Ferdinand Feldhofer's team headed to Salzburg for a tough away day against the reigning champions. With two weeks of preparation including some joint training sessions, several members of the Rapid II team got their chance in a matchday squad with the senior side. Dragoljub Savic (who debuted in 2020) got the nod, as well as Nicolas Binder and Aristot Tambwe-Kasengele who got their first experiences of a senior matchday. After a 2-1 defeat at home in February, Rapid were out for some revenge on Sunday.

With that in mind, the game got going at a very high tempo, but with a header wide from Adamu, the first of the chances belonged to the hosts. Just after registering our first shot on goal, we fell behind to an unstoppable long range effort from Sucic (17’). Rapid went for an immediate response, but Berni Zimmermann came forward, and Marco Grüll too, only to see a cross deflected away from a good position (18’). Five minutes later, our young keeper Niki Hedl made his presence felt with a vital save, palming the ball away from the goal line after Okafor’s header. The next chance was one of our own, but Grüll blazed his shot high and wide after having difficulties getting the ball under control in the Salzburg area (26’). As the hosts pushed for a second goal, Kevin Wimmer got across to make one big intervention (29’), before Hedl showed his class again with another good stop (34’), tipping the ball over the top to leave the score at 1-0 at the interval. 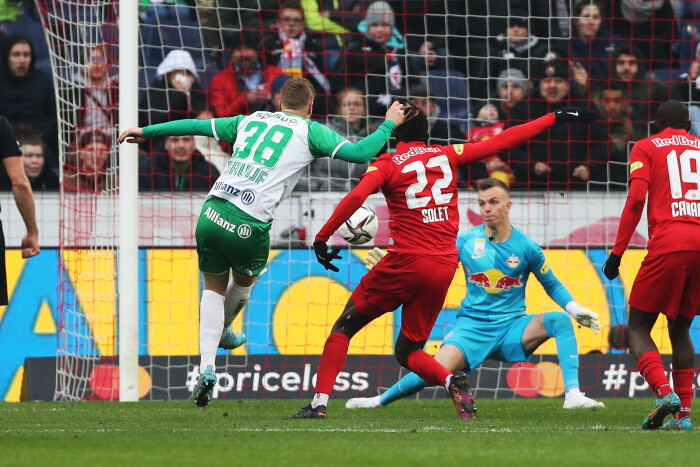 Ferdy Druijf remained calm in the area to fire home Rapid’s equaliser in the second half. © GEPA

Christoph Knasmüllner replaced Dejan Petrovic as the teams took to the field for the second half, and the perfect start was not far away for Rapid and the traveling fans in the corner of the arena. Zimmermann controlled a cross nicely, had the vision to find the substitute in the box, and with a little bit of fortune the ball ended up at the feet of Ferdy Druijf, who calmly fired in at the near post for 1-1 (52’)! After that moment we were right back into the game, making everything a contest and frustrating the Salzburg players and fans. Knasmüllner almost completed a perfect turnaround when he controlled and volleyed the ball into the back of the net nicely, alas he was rightfully adjudged to have been offside (58’).

The game was now opening up into an end-to-end exchange of attacks, Grüll tried to set up Druijf for another goal, but his shot was deflected behind from the left (63’). Zimmermann had another excellent game, giving it his all and motivating the fans, but he was withdrawn for Jonas Auer after running himself into the ground for nearly 70 minutes. The tempo remained high, and just as we were going for goal, Salzburg were too, and our defence stayed busy and dealt well with the probing attacks. Wimmer and Druijf blocked one effort, Emanuel Aiwu timed his slide perfectly to knock another ball to safety (73’), and emotions were running high as more and more heavy challenges crept into the game.

Agonisingly, after 94 minutes, Salzburg were the ones to find a way through. A cross was blocked and the loose ball fell the way of Junuzovic who scored from close range for 2-1. Knasmüllner still had one more golden chance to equalise, but with the last kick of the game, his curling shot sailed just over the right-angle, and that was that (96’). Unfortunately the players couldn’t bring a point home despite a battling display in Salzburg, but after analysing proceedings, Rapid will have to look onwards and upwards, because another big game is coming up on Sunday as we face WAC at home. CHINS UP, LADS!