Rapid’s bright start isn’t enough for points against SK Sturm, as the guests benefited from a late penalty to come from behind and claim a win on Sunday evening.

After the bitter European Cup exit on Thursday, Sunday marked the 6th round of the ADMIRAL Bundesliga, and a return to domestic league duties. Our team welcomed SK Sturm Graz, so a challenging and exciting game was guaranteed. Yusuf Demir (ankle problems) and Max Hofmann (concussion) had to miss out on the day, and Christopher Dibon was also absent from the matchday squad due to Achilles tendon problems.

With the ball rolling, both teams built up a lot of pressure in the opening stages, Marco Grüll was the first one to try his luck with a shot driven towards the near post in the 6th minute. Six minutes later, it was Nicolas Kühn with an attempt, but that was blocked by the Sturm defence (12’). Three minutes later the stadium’s noise levels went through the roof: Patrick Greil played an inch-perfect pass in behind to Nic Kühn, who raced in on goal at speed, kept his composure against the keeper in a one-on-one situation, and hammered the ball into the net for his first Bundesliga strike - GOAL, 1-0 (15’)! The guests, however, replied not long after, and scored following a corner kick with an unstoppable deflected volley to equalise, 1-1 (24’). It was an intense back and forth on both sides, and the teams refused to give each other an inch. In the 33rd minute Marco Grüll placed a low shot on target, which forced the keeper into action to claw it away from the corner of the Sturm goal. Another gilt-edged chance also came the way of our number 27, yet after an attempt by Guido Burgstaller, Grüll put the rebound over the empty goal frame (37’). The lead could have been ours, but the ball just did not want to go in again. With the scores at 1-1, we headed into the dressing rooms. 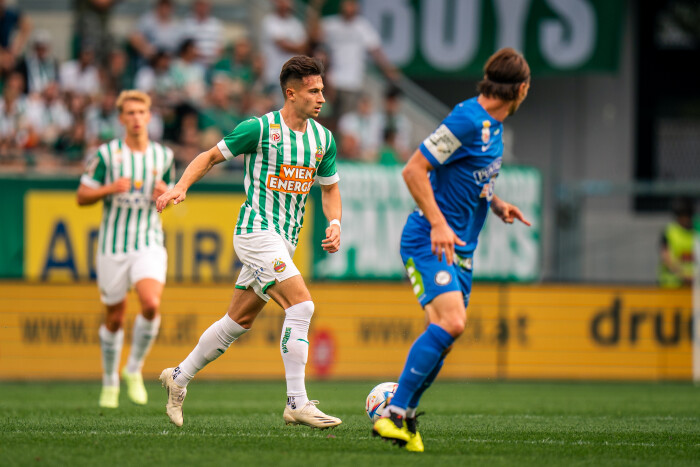 The teams came back out onto the field unchanged, and once more both teams built up pressure. In the 49th minute Nic Kühn skilfully outwitted the defence with a fine run, but eventually he stumbled in the penalty area. Our team looked to play forward, but carving out dangerous chances in front of the Sturm goal wasn’t proving easy. The next good attempt came from Jonas Auer, who sent a free kick cross into the hands of the keeper (60’). Eight minutes later however, there was a painful knock, and Leo Querfeld had to be replaced after a collision left him wounded. Kevin Wimmer came on in his place, as did Ferdy Druijf for Guido Burgstaller (68’). After a corner kick, Martin Koscelnik then had a go with a caressed shot that just missed the goal (71’). The flow of the game was disrupted by many fouls and stoppages, yet at the start of the Rapid quarter-hour Nic Kühn again made a good impression, but his pass in behind was just a touch too far (78’). Berni Zimmermann came on for Patrick Greil as Rapid looked to add that extra bit of attacking momentum (80’), however in the 84th minute there was an unfortunate twist; after a controversial penalty decision, it wasn’t only a red card for Martin Moormann, but also the second goal for the guests as they buried the spot kick for 2-1 (86’). Despite six minutes of injury time, we were unable to turn the result around with ten players left on the field for the conclusion of a tight and tense game, and so this one ended in a battling and bitter defeat.

Next up, attentions turn to the Cup, as we go again on Thursday against Allerheiligen.