The 1980’s would prove to be successful for Rapid Vienna: the club landed its first Championship in fourteen years at the beginning of the decade and would go on to sensationally reach the UEFA Cup final. By contrast the early nineties represented something of a barren period but the Green & White giant awoke from its slumber to reinstate itself both domestically and internationally, winning the league and cup and reaching the final of the European Cup Winners’ Cup.

The wait for a Championship over

After a strong showing in early 1981, Rapid went into the 1981/82 season as favourites for the league title. Having gone into the winter break top of the table, the Hütteldorfers appeared to be confirming critical opinion of their championship credentials. However shaky form at the start of the New Year saw the Green & White title challenge wobbling somewhat, but Rapid recovered and re-affirmed themselves as the front runners. On the last day of the season on May 25th 1982 roughly twenty-five thousand fans packed into a Gerhard Hanappi Stadium that was full to bursting point in order to be a part of the first league victory in fourteen years. A confident and focussed Rapid side confirmed the championship victory with a commanding 5:0 win over Innsbruck. Hans Krankl, who missed the final match due to suspension, offered some words to the TV cameras that remain as powerful today as they were in 1982: “Everyone wanted to steal the title away from us! Coaches, referees. But now the trophy is in Hütteldorf! The trophy is in Hütteldorf! 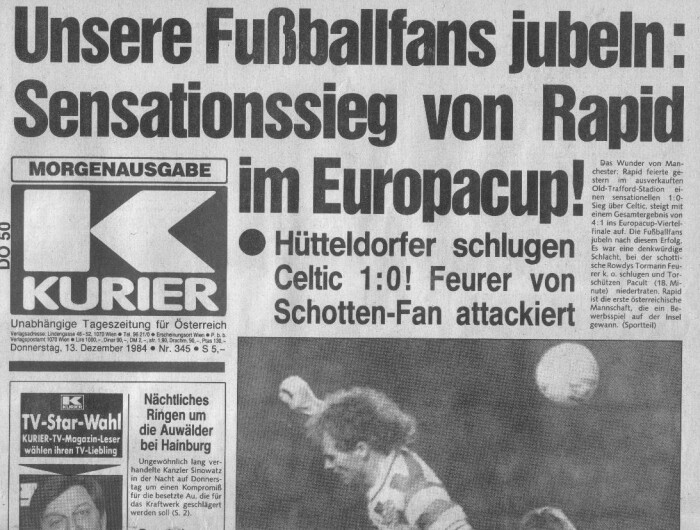 In the 1984/85 European Cup Winners’ Cup Rapid overcame Besiktas of Istanbul 5:2 over the two legs to set up a meeting with Glasgow Celtic in the last sixteen of the competition. The first leg resulted in a 3:1 home victory in the Hanappi Stadium, but the return fixture saw Rapid go down 0:3 in Parkhead. What followed was one of the most controversial incidents in our entire history: after various contentious refereeing decisions Rapid player Rudi Weinhofer was struck by a thrown object and injured. With Rapid unable to make any further substitutions, the Club decided to officially complain about the result; a complaint the relevant authorities found to be justified.

The result was a reply on December 12th 1984 in a neutral venue – Manchester United’s Old Trafford. Rapid, in red, once again took on Celtic, in traditional green and white, and ran out 1:0 victors courtesy of Peter Pacult’s goal to take a place in the quarter finals. Unpleasant scenes unfortunately followed as a spectator attacked Rapid goalkeeper Herbert ‘Funki’ Feurer as he stood in his goal, while Peter Pacult suffered a similar fate as he exited the pitch. 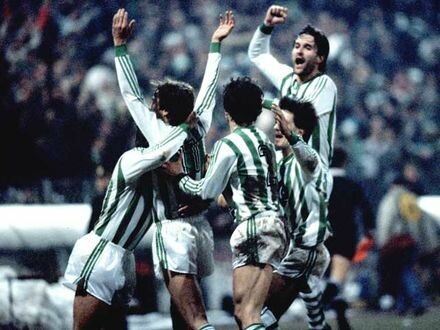 The road to the final!

After the Celtic match further legendary ties lay in store: in the quarter finals Rapid trailed opponents Dynamo Dresden 0:3 after the first leg. After thirty-seven minutes of the second leg in Vienna, the Green & Whites had already restored parity in the tie, and would go on to win the match 5:0. In the semi-final Dynamo Moscow were seen off by an aggregate score line of 4:1 as Rapid advanced to the final to face newly crowned English champions Everton.

Here the dream came to an end as Everton emerged victorious, winning 3:1. However, Hans Krankl achieved another milestone in his illustrious career when he netted the first ever goal scored by an Austrian club side in a European final. The pain of defeat wasn’t to remain long though, as the Hütteldorfers went on to beat city rivals Austria Vienna to secure their third cup win on the trot via a penalty shootout following a tense final. 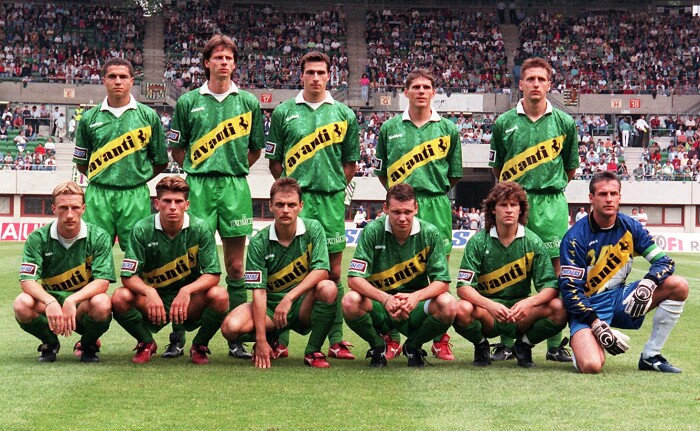 A difficult phase followed both in economic terms and on the field and both areas were to suffer. But fresh impetus was breathed into the Club and it began its revival: under a new Board led by Chairman Karl-Heinz Oertel and Manager Werner Kuhn, the Club managed to win new sponsorship heading into the 1994/5 season. Trainer Ernst Dokupil built a new team based on young emerging talent, players such as Peter Schöttel, Michael Konsel, Robert Pecl and Dietmar Kühbauer. 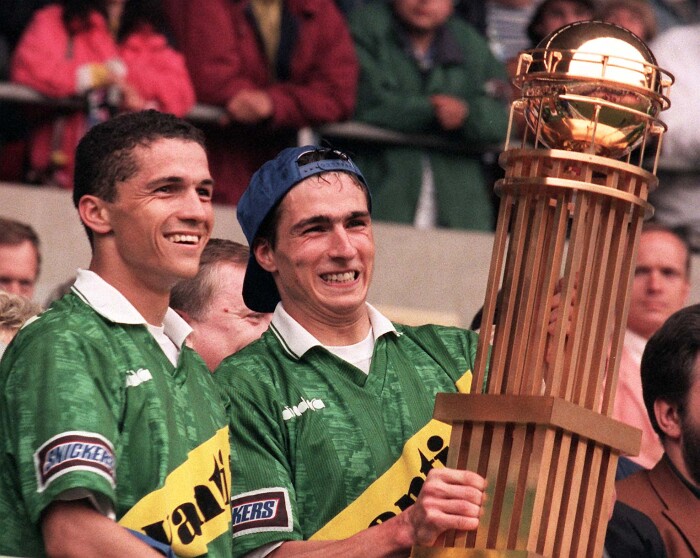 This new constellation saw a fresh team structure emerge, and on the pitch an upwards trend became tangible: in the league Rapid delivered a championship challenge that eventually resulted in a third place finish. In the cup the Green & Whites eliminated favourite and traditional rival Salzburg on the way to the final, where a goal from Peter Guggi secured a 1:0 victory over DSV Leoben and meant Rapid lifted the cup for the fourteenth – and until the time of writing- last time. 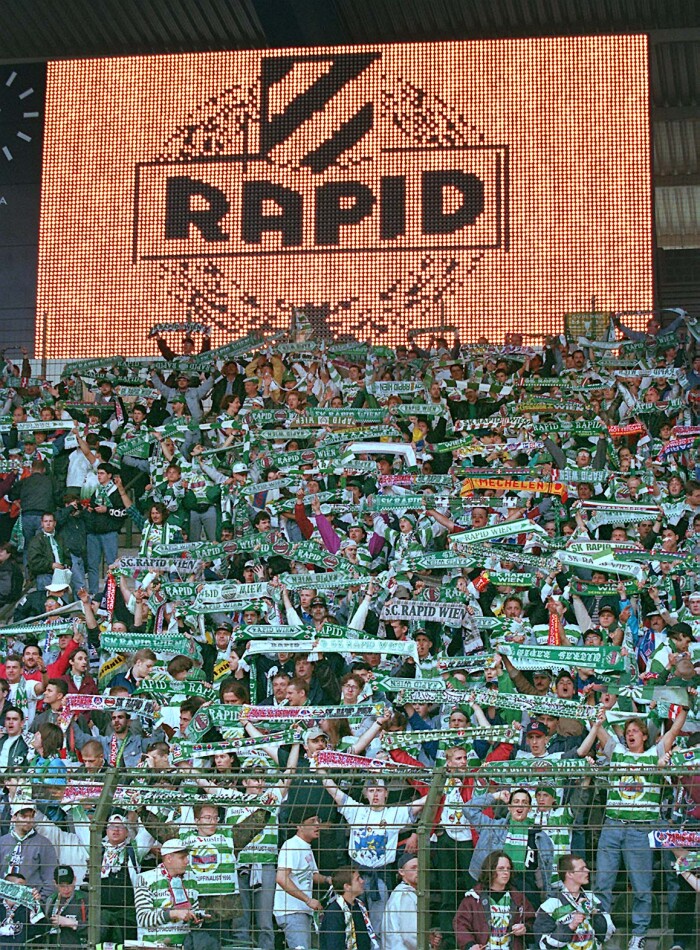 In the first round of the 1996 Cup Winner's Cup Rapid dispatched Romanians Petrolul Ploiesti 3:1 over the two legs. After a 0:2 first leg defeat in Lisbon in the second round against Sporting it appeared as if the European adventure was prematurely over. But hope remained as Rapid led the second 1:0 going into injury time through a goal from Kühbauer, before Stumpf popped up with the crucial equaliser just seconds before the final whistle. In extra-time Rapid added a further two goals and progressed to the quarter finals having won 4:0 on the night. Dynamo Moscow were promptly dispatched 4:0 on aggregate, setting up a semi-final showdown with Feyenoord Rotterdam; a match which belongs amongst the Club’s finest hours. After drawing 1:1 in Holland and winning 3:0 in Vienna, Rapid had made it to the final of the Cup Winner's Cup just two years after the Club had been teetering on the brink. There was to be no fairy tale ending though for the thousands of Rapid fans that travelled to Brussels for the final against Paris Saint-Germain: a deflected free-kick handed the French side victory as Rapid went down 0:1. 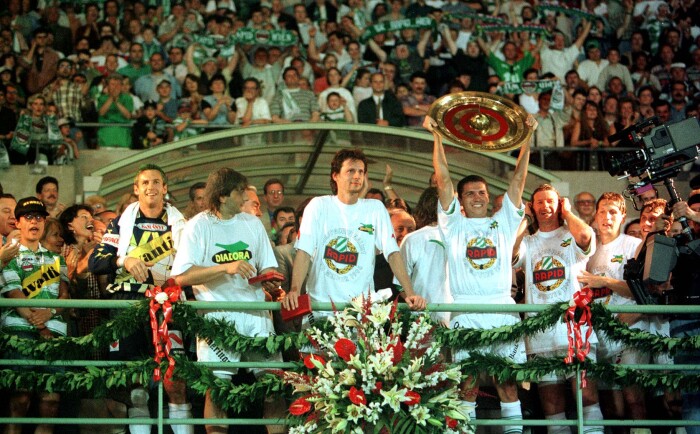 Despite the setback in Brussels the season would go on to be one of the most successful in the Club’s recent history. Despite Rapid having to cope with the rigours of domestic and European football, only Sturm Graz managed to hang onto the Hütteldorfers’ coat tails in league. On June 1st 1996 it came down to a final day shootout for the title between two direct rivals: in front of forty-eight thousand fans in the Ernst Happel Stadium goals from Pivarnik and Stumpf handed us a deserved 2:0 victory over Sturm and simultaneously our first league title in eight long years.

First appearance in the Champions League

In the qualification play-off for the Champions League proper Rapid defeated Dynamo Kiev 2:0 in the first leg in Vienna, before producing a stunning team performance in the Ukraine to run out 4:2 winners and secure for the first time a place in the Champions League group stages. Drawn in a tough group alongside Manchester United, Juventus and Fenerbahce, further success wasn’t realised, however our first appearance in European football’s premier club competition continues to live long in the memory.