Despite domestic and international success being a constant theme throughout the club’s history, the years following the Second World War up to the beginning of the 1960’s have come to be known as SK Rapid’s “Golden Years”. During this period our club became synonymous with success, making a profound mark internationally, and the era gave birth to many Rapid legends. (Note: legendary phases such as the 80’s and 90’s can be found in the next section).

Rapid on the international road: the 50th jubilee celebrations were marked largely by extensive international travelling and tournaments. Following a tour of Malta at the turn of the year and a further tour of Egypt in February, the star turn of Rapid’s calendar was a month long summer trip to South America. After playing against household names such as Vasco de Gama, Flamengo and Sao Paulo, Rapid imported into Austria the so-called “Brazilian System”; more or less an early version of the modern back four. In the inaugural 1949/50 season of the Austrian State League, Rapid had to be satisfied with the runners up spot.

In 1950/51 Rapid recorded a 7:5 (3:4) derby win in front of 55,000 spectators in the Vienna Stadium in what remains one of the most famous matches in the history of Austrian domestic football. A week later Sturm Graz were hammered 12:1 in front of 13,000 Rapid fans at the Pfarrwiese. Another set of local rivals, Vienna FC, fared little better than Sturm, as they were pummelled 9:0 by the Green & Whites. Rapid went into the winter break unbeaten and with a four point lead over nearest challenges Wacker Vienna.

In early spring the 21-year old Gerhard Hanappi was first available for selection for Rapid following a protracted transfer from Wacker. His debut proved to be something of an anti-climax though: against LASK the Hütteldorfers succumbed to their first – and only – defeat of the season, surprisingly going down 1:2. Nevertheless Rapid powered their way to a 17th league title, scoring an incredible 133 goals in 24 league matches in the process. This amazing goal tally remains unsurpassed.

Shortly after the conclusion of the league campaign, four teams met in Vienna to contest the 1951 “Zentropa Cup”. The tournament was designed as a re-incarnate of the Mitropa Cup that had proved so popular pre-war. Rapid advanced to the final by dispatching Lazio 5:0, where, in front of 23,000 fans they defeated Wacker Vienna 3:2 (1:1). Defender Ernst Happel scored the winner from the penalty spot in the 90th minute.

Winning streak and next title

After further successful international tours to Turkey and Greece, Rapid remained in the trophies in 1951/52. Ten wins in a row, including a 3:1 win over table topping Austria Vienna, put Rapid back on top of the pile. A 7:1 thrashing of Sturm Graz followed by a comfortable 4:0 win in Kapfenberg saw the Green & Whites become champions of Austria for the 18th time. 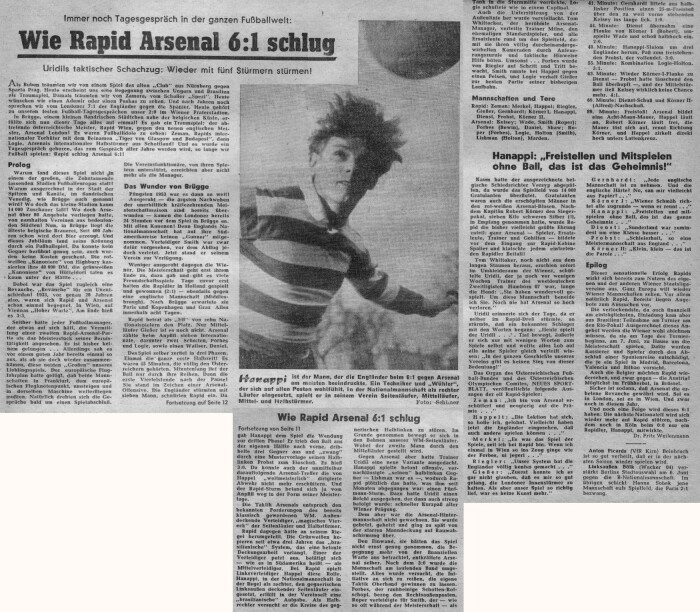 The following league campaign culminated in a third place finish. It was in the international arena that the glittering performances were to be found. On May 24th 1953 Rapid beat newly crowned English champions Arsenal 6:1 (2.0) in a prestigious one-off encounter in Bruges, Belgium. Trainer Josef “Pepi” Uridil, who had replaced long time servant and successful Coach Hans Pesser following a disappointing tour of South America, sent his players out to face the Londoners after saying: “there is eleven of them, there is eleven of us. Do what you can and if you win they’ll be a little glass of bubbly afterwards”. Just three days earlier in Amsterdam, Uridil’s side had already tasted success over English opposition, beating Middlesbrough 2:1 in front of 65,000 onlookers.

Third place in the World Cup in Switzerland

The high point of the footballing year in 1954 was the World Cup staged in Switzerland. There was more than a hint of Green & White in the Austrian national side’s line up: Walter Zeman, Ernst Happel, Gerhard Hanappi, Karl Gießer, Paul Halla, Hans Riegler, Robert Dienst, Erich Probst and Robert and Alfred Körner all featured, meaning the Austrian side was virtually comprised of the entire Rapid team. After wins over Scotland, Czechoslovakia and Switzerland, Austria slipped to a 1:6 loss against Germany in the semi-final. In the third place play-off Austria signed off with a victory, defeating title holders Uruguay 3:1.

Rapid went into the 1956/57 season under the tutelage of new Trainer Max Merkel. The highlight of 1956 was the European Cup match against Real Madrid. The first leg was played out in front of 125,000 fans in the Santiago Bernabeu and ended 4:2 in favour of Real. The second leg was an intense and suspenseful affair as Rapid raced into a 3:0 lead courtesy of a hat-trick from the returning Ernst Happel in front of 53,000 fans in the Prater Stadium. Di Stefano scored a crucial goal to level the tie overall. Real won the deciding play-off 2:0 in Madrid and went on to lift the trophy.

In the 1967/68 European Cup last sixteen, Rapid, having won the first leg 1:0, went out to German champions Eintracht Braunschweig after suffering a 2:0 second leg defeat in Germany. In the league however Rapid were the dominant force, coasting to the title, before rounding off a successful season with a 2:0 win over GAK in the cup final. No-one would have foreseen that it would be fourteen long years until Rapid fans would again be celebrating a league title. 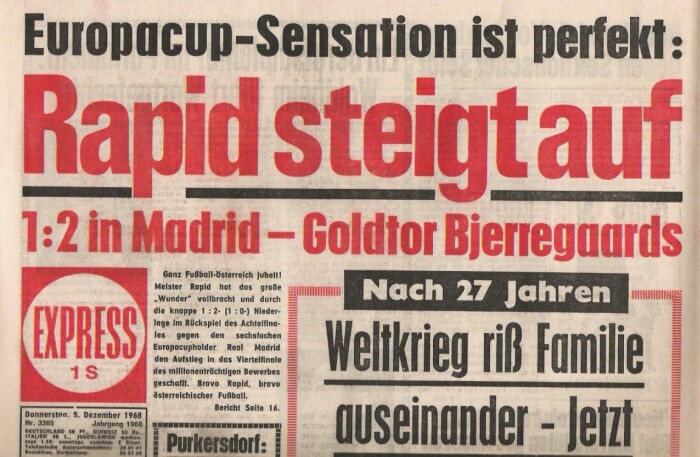 One of the club’s finest hours on the international stage came to pass in autumn 1968. In the second round against six-time competition winners Real Madrid a goal from Günter Kaltenbrunner gave Rapid a 1:0 home victory in the first leg. In the return leg in the Bernabeu, Rapid trailed 0:1 at half time in front of 80,000 fans. But in the 50th minute Bjerregaard struck a spectacular equaliser. The Spaniards went 2:1 up shortly afterwards, but the Rapid defence stood up to the pressure and the Green & Whites advanced on away goals. In the quarter finals Rapid went out 0:3 over two legs to reigning champions Manchester United. The 1968/69 European Cup campaign remains one of the proudest chapters in Rapid’s long international history.