In June 1971 work began on a new home for SK Rapid, the West Stadium, which would later be re-named the Gerhard Hanappi Stadium in honour of its architect. However the stadium wasn’t opened until almost six years after work had commenced, after Hanappi’s plans proved costlier than anticipated and exceeded the original budget. The final touches were applied to the stadium after a further three year delay.

Empty seats despite fireworks on the pitch

The first league game in the new West Stadium took place on May 10th 1977. Rapid emerged victorious over Austria/WAC courtesy of a late goal from Paul Pawlek that sealed a 1:0 win. A healthy crowd of 14,000 had witnessed Pawlek’s goal in the new ground, whose capacity extended beyond 20,000. Following the opening success, Rapid continued to deliver spectacular performances and exciting football, but the stadium struggled to capture the public’s imagination. Eleven days after the win against Austria/WAC, VOEST Linz were beaten by a score-line of 5:4 in an enthralling game. However only a disappointing 4,000 fans were present to celebrate Helmut Kirisits’ last minute winner. Even fewer turned up to see Rapid comfortably beat Sturm Graz 3:0, but the low point was arrived at two weeks later: a meagre 3,000 were in the West Stadium to witness the 11:1 demolition of GAK, in a match which saw Hans Krankl net an incredible seven times. Lots of records fell against GAK, records that still stand today.

The official opening of the West Stadium took place at the beginning of the 1977/78 season. On September 14th 1977 a military band and fireworks high above the roofs in Hütteldorf ushered in a new era. The on pitch offering that day was a UEFA Cup fixture against neighbours Inter Bratislava from the Slovak capital. A goal from Walzer sealed a 1:0 victory for Rapid.

However Rapid’s stay in their new home was cut short. Early in the 1977/78 season the ground was closed due to serious building defects. In effect Rapid became homeless overnight, playing home fixtures in the hurriedly modernised Pfarrwiese, the Hohe Warte and even in the Horr Stadium – home of Arch rivals Austria Vienna. The new stadium was finally in compliance with building regulations during the 1978/79 season, and was re-opened with a Vienna derby that attracted 20,000 spectators. Goals from Happich, Francker and Krauss handed Rapid a 3-1 victory to ensure a successful return home.

Early enthusiasm for the new stadium, which would later go on to be known affectionately as “St. Hanappi”, was lacking amongst Rapid supporters. Many fans made the pilgrimage to the new, modern stadium grudgingly, missing the familiar and intimate atmosphere of the Pfarrwiese. The new steel of the West Stadium lacked the charm of the wooden benches of the old ground for many fans. Attendance figures lagged behind expectations, and this would continue to be the case for a number of years.

The architect of the new stadium, and on-field Rapid legend, Gerhard Hanappi, passed away in summer 1980 after a battle with cancer. To honour the passing of a club icon the West Stadium was renamed the Gerhard Hanappi Stadium in 1981. In 1982 the stadium began to gain in popularity: in May a 5:0 win over SSW Innsbruck confirmed Rapid’s 26th league championship – the Gerhard Hanappi Stadium was packed to the rafters as 25,000 supporters celebrated the success. In the following season Rapid went undefeated at home, and attendances began to grow gradually.

On route to the club’s first European final appearance in the 1984/85 season the Gerhard Hanappi Stadium played host to some of the finest performances in Rapid’s history: a 3:1 win over Glasgow Celtic was topped by a sensational 5:0 victory over Dynamo Dresden, before a 3:1 defeat of Dynamo Moscow booked a place in the final. The Green & Whites continued to deliver memorable European nights into the 1990’s and great encounters with clubs such as FC Bruges, Standard Liege and Inter Milan. 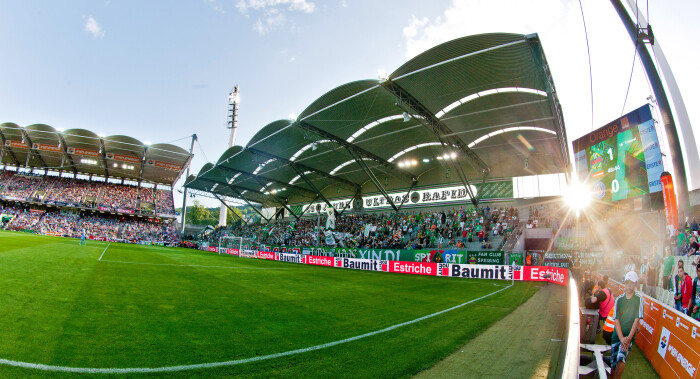 But it was in the 2000’s that the ground became a true fortress. In 2001 the stadium was refitted, standardised and roof covering added to all stands. Numerous technical adaptations took place, which reduced the capacity to 17,500. In October 2002 the new and improved cauldron was opened. Everything was now in place to allow for the development on the ‘Myth of St. Hanappi”, a term coined by Trainer Josef Hickersberger that retained its poignancy and validity until the day the demolition work started. 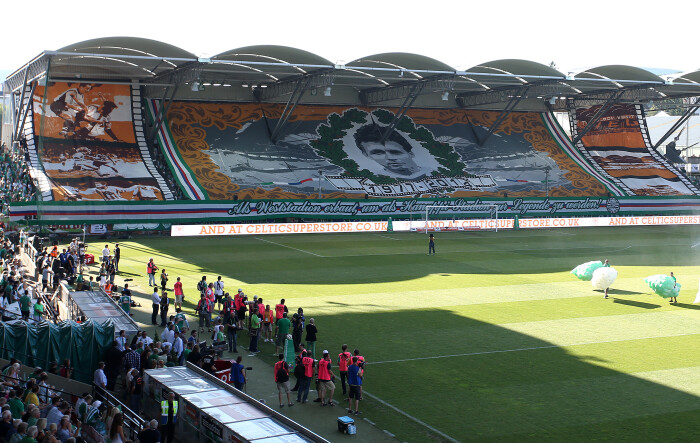 Farewell to a cult stadium

The final boom period for the Gerhard Hanappi Stadium, which became a football Cathedral and site of pilgrimage to all Green & White followers, lasted from the mid-2000’s until the demolition of the cult-stadium in October 2014. With heavy hearts but also with a huge sense of excitement at the prospect of the new Allianz Stadium, the Rapid family bid a final farewell to its home of thirty-seven years. The Gerhard Hanappi Stadium, or St. Hanappi, had housed Rapid as they delivered seven league championships and five cup victories.

Inside the Gerhard Hanappi Stadium