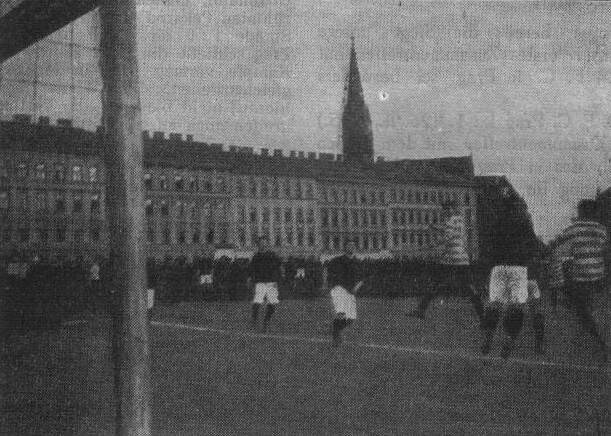 The Rapid-Viertelstunde (literally: the Rapid quarter of an hour) has for more than a century been the most remarkable and well known of all the traditions associated with SK Rapid. The typical clapping and chanting that accompanies a game entering the final fifteen minutes is performed by fans in good and bad times and is a corner pin of our club.

The origins of the Rapid-Viertelstunde are assumed to be found in the time when Rapid played at Rudolphsheim. From the pitch you could see the church and its clock tower. The clock is said to have had an important role in the creation of the Rapid-Viertelstunde – however this story remains a point of contention, particularly as the emergence of the tradition followed no clear pattern and rather seemed a spontaneous action.

The Rapid spirit and the final 15 minutes

In the formative years of the club, SK Rapid was already developing a reputation for winning games late and playing to the final whistle, as evidenced by numerous contemporary newspaper reports. The early habit the club developed of winning games at the death also feeds back into the traditional spirit, never say die attitude and the team’s propensity for diving deep into its energy reserves to get the victory.

Countless newspaper reports confirm the early formulating of the legend of the Rapid-Viertelstunde. For example, an article in the Neue Wiener Tagblatt (New Viennese Daily) on 9th September 1916 reported that: “only in the last quarter of an hour the superiority of the Hütteldorfers came to the fore.” The same newspaper wrote on 13th November 1916 about Rapid against Sportclub; “the Rapid players only secured the 2:0 victory in their famous “quarter of an hour”, before continuing: “it was only in the final 15 minutes that the team from Dornbach could no longer live with the tempo which became increasingly quick, and in this period of the game conceded the two goals”.

Alongside the now famed Rapid-Viertelstunde, in 1918 another Vienna newspaper, the Fremdenblatt, commented on the atmosphere at Rapid home games. The following is from a report of the match SK Rapid vs Rudolfshügel: “It has always been difficult to topple Rapid on their own patch. Rapid is a team that knows how to fight and which has menacing support that artificially propels them to victory. Almost always in the “famous quarter hour” the opposition know to submit, whilst in the middle of this desert cacophony even the most questionable appeals are awarded by the referee in order to simply have his peace”.

As true today as it was 100 years ago

The historical tradition of the Rapid-Viertelstunde remains an integral part of the Rapid match day experience and is handed down from generation to generation. A cursory glance at statistics shows a disproportionate number of games turned on their head by Rapid in the closing 15 minutes. The Rapid-Viertelstunde isn’t simply a myth, it is tangible, and represents the time where each Rapid player digs deepest to overcome the opposition, and the team itself becomes its most dangerous for their opponents.

In 2011 the Rapid-Viertelstunde was recommended for being listed as a non-material UNESCO world cultural heritage. However in the end, despite being over a century old, it wasn’t placed on the list. Regardless, the final 15 minutes of future Rapid games in Hütteldorf and across the globe will continue to be ushered in in time honoured fashion, and some things will never change.