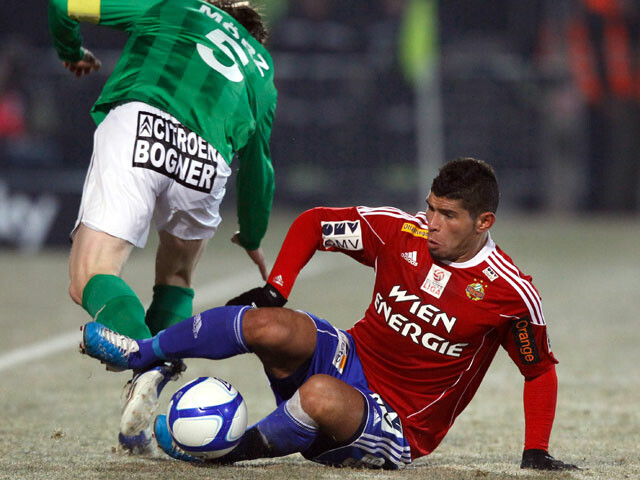 Head coach Peter Pacult opted to show faith in the 11 that beat Kapfenberg last time out at the Hanappi. A win over the Bundesliga strugglers SV Mattersburg was imperitive for a 5th placed Rapid side, desperate to stay in contact with the leaders as the league championship turns into the home straight. With the exception of injured duo Vennegoor of Hesselink and Dober, coach Peter Pacult had a full strength squad at his disposal.  Tough conditions under footRapid came out of the traps well, Rene Gartler fired off a fourth minute shot, while Atdhe Nuhiu worked the keeper with a 14th minute header. It was a promising start from the Green-Whites who appeared to be adapting to the conditions better than their lowly opponents. Mattersburg's Ilco Naumoski could count himself lucky on 23 minutes, the Burgenlander only receiving a yellow card from referee Brugger after hitting Ragnvald Soma with an elbow. Lightning struck twice just a couple of minutes later as Markus Schmidt sythed down Tanju Kayhan and also escaped with only a yellow card. On another day the hosts could have been a man light by this stage. Rapid were trying to let their football do the talking a beautiful swinging Steffen Hofmann set piece was met by a 26th minute Nuhiu header. The tall frontman's effort just lacked direction and was gathered by the home keeper. Both Naumoski and Gartler spurned chances for their respective teams to ensure both sides went into the sancturey of the half time dressing room with game still deadlocked. Rapid struggle to find responseYasin Pehlivan delivered the first strike of the second half his powerful drive fully extending home keeper Thomas Borentisch and forced the SVM keeper into conceding a corner. Pacult responded to an otherwise lacklustre start to the second half by introducing Boris Prokopic for Pehlivan and Christopher Drazan for Steffen Hofmann. Seconds after the change Helge Payer kept the hosts at bay with a superb stop from a deflected Seidl effort. Payer was powerless though just after the hour mark as Alexander Pöllhuber scored from close range after appearing to shove Tanju Kayhan out of the way in the build up. Hamdi Salihi came on for Rene Gartler with 25 minutes to go but was unable to provide the required spark as the Hütteldorfers ran out of ideas in the closing stages. The whistle went on what was a bitter blow for Rapid ahead of their gruelling "English Style" fixture pile up in the coming rounds.23rd round:SV Mattersburg - SK Rapid 1:0 (0:0)Pappelstadion, 5.200, Referee BruggerGoal: 1:0 (63.) PöllhuberMattersburg: Borenitsch - Höller, Ilsanker, Pöllhuber, Schmidt - Farkas, Seidl, Parlov, Mörz - Naumoski (79. Salamon) - BürgerSK Rapid: Payer - Kayhan, Sonnleitner, Soma, Katzer - Hofmann (57. Drazan), Heikkinen, Pehlivan (57. Prokopic), Kavlak - Gartler (65. Salihi), NuhiuYellow Cards: Naumoski, Pöllhuber, Schmidt, Höller Nuhiu, Soma, Katzer