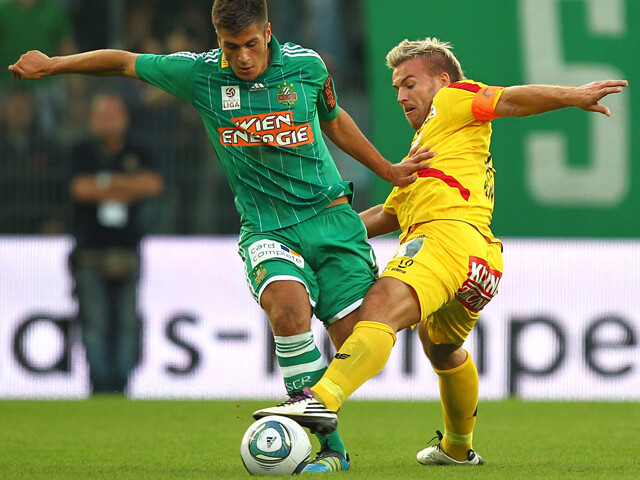 Jan Novota retained his place in goal to answer one pressing question - the other, if Rapid could finally find a victory from somewhere, would be answered in due course. The visit of basement boys Kapfenberg represented the perfect opportunity to steady the ship for Peter Schöttel's charges and things immediately started going to plan: after just four minutes Trimmel's goal bound header was inadvertently blocked by team mate Rene Gartler to let Kapfenberg of the hook. Novota repelled the visitor’s first attempt on goal in the shape of a 7th minute free kick from Mavric. Mavric was soon in action at the other end of the field, turning a 12th minute Hofmann free kick into his own net to hand Rapid a deserved lead. Confidence appeared to flow through Rapid veins once more, the Green-Whites finally displaying the brand of football sorely lacking in recent matches.   Doubling the advantage  Rapid began to win the 50/50's, force a corner and - most importantly - fashion chances. Deni Alar nearly netted against his former employers in the 21st minute, while a Soma header powered just over the bar three minutes later. Finally Rapid made one count: Christopher Trimmel's sweet 28th minute strike gave finally gave Rapid breathing space. Alar nearly put the matter beyond doubt just a minute later but goalkeeper Wolf came out on top following a swift Rapid counter. The Green-Whites had a nasty shock before half time though and were made to pay for their profligacy in front of goal. A weak Gucher shot form the edge of the area somehow beat Novota to half the arrears for KSV as the whistle went for the end of the first period.   An entertaining start to the second half saw Mavric round off his day out in Vienna in style: the own goal scorer felled an on rushing Trimmel - last man - red card. Afternoons work complete and only 49 minutes on the clock. Rapid made the game safe on the hour mark as Trimmel nodded down an Alar cross into the path of Gartler who made no mistake in all but killing off the lowly visitors.   Finishing it off from the penalty spot  A confident and cohesive Rapid then started to apply gloss to the score line: captain Steffen Hofmann fired home a 79th minute penalty to rub salt in Kapfenberg wounds following a Micic foul on Drazan in the box. With the game in the dying embers there was still time for substitute Hamdi Salihi to round off the scoring after he got on the end of man of the moment Christopher Trimmel's square ball to beat Wolf with ease. 5:1, game over. The whole of the Hanappi could breath a collective sigh of relief.              Tipp3-Bundesliga, 8ht round:SK Rapid - Kapfenberg SV 5:1 (2:1)Hanappi-Stadion, 14.800, Referee Krassnitzer Goals: 1:0 Mavric (13./ET), 2:0 Trimmel (27.), 2:1 Gucher (38.), 3:1 Gartler (59.), 4:1 Hofmann (79./Penalty), 5:1 Salihi (92.) SK Rapid: Novota - Schimpelsberger, Soma, Patocka, Katzer - Trimmel, Heikkinen (80. Prager), Hofmann, Drazan - Gartler (68. Salihi), Alar (81. Nuhiu) Kapfenberger SV: R. Wolf - Taboga, Mavric, Gollner, Prettenthaler - Erkinger (67. M. Gregoritsch) - Elsneg (68. Kröpfl), Gucher, Sencar, Felfernig - Prokoph (54. Micic) Yellow Cards: Schimpelsberger, Drazan, Salihi Taboga, Felfernig, Gucher, Micic Red Card: Mavric (50.) (gw)