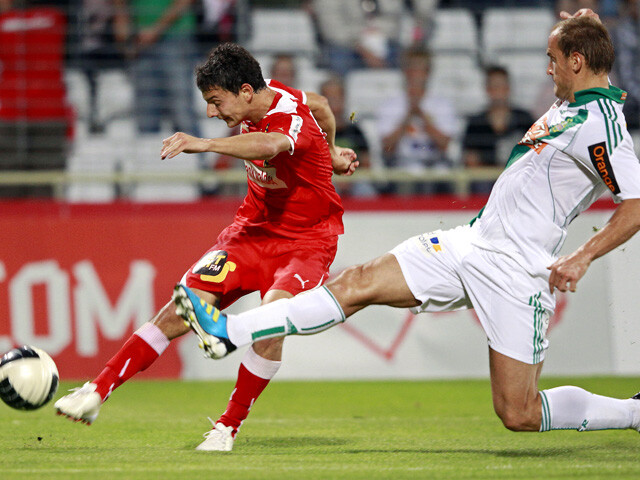 For the first time in 17 years the Stadium in Mödling was again sold out. Juventus were the visitors on that occasion, this time it was Vienna heavyweights Rapid making the short journey south. Ex Rapid man Didi Kühbauer's side had been making an excellent fist of life in the top flight in recent weeks, but Peter Schöttels troops also looked to have turned the corner with three wins inside a week. The Rapid boss's line up showed faith in the players that had done so well in the past 7 days, the only change was in goal with Payer again lining up between the sticks in place of Novota. Quick StartRene Gartler, making his 50th league appearance in Rapid colours, thought he had put Rapid ahead early doors: the tricky forward finished of a lovely flowing build up from the Green Whites only to be denied by the linesman's flag. The recalled Helge Payer was being kept busy in the visitors goal, denying Schicker and Jezek inside the opening half an hour as the hosts, far from overawed, went toe to toe with their illustrious counterparts. The hosts looked to be taking control of the game and capped their work with a 36th minute opening goal. A swift counter from a Rapid free kick swept up field and Ouedraogo rounded the move off to the delight of the home supporters. The Green Whites were relieved to make it into the break still only one goal adrift after a Mevoungo effort cannoned back off the bar in the 44th minute. Half time changesSchöttel looked to curb the host’s momentum by introducing Pichler for Soma. Rapid attempted to wrestle the initiative back in the opening second half minutes, but were undone as Jezek lashed home a powerful 54th minute drive to double the deficit. It got worse on the hour mark when Quedraogo bagged his second and Admira's third, beating the helpless Helge Payer and sending the home fans into delirium. Chaotic end to gameThe three-goal advantage was short lived: A Patocka header reduced arrears just a minute after Quedraogo's effort to give Rapid new hope. The sense of hope grew further in the 68th minute as Hofmann converted a penalty following a foul on Gartler. The Viennese were incredibly back in the game and a palpable feeling of tension emanated from the stands. With still over ten minutes to play, Hamdi Salihi turned the game on its head. The Albanian striker, on as a second half substitute, levelled matters in the 79th minute with his first touch and incredibly Rapid looked like the team most likely to take the three points. With the Hütteldorfers pushing for victory disaster struck when referee Eisner awarded a soft penalty to the home side, a decision that was at best questionable. Jezek stroked the ball home and snatched victory for Admira and inflicted a bitter defeat on Schöttel's side, the Rapid coach taking umbrage with the decision - his discussions with referee Eisner continuing long after the final whistle. Tipp3-Bundesliga, 10th round:Admira - SK Rapid 4:3 (1:0)Trenkwalder-Arena, 10.600,&nbspReferee EisnerGoals: 1:0 Ouedraogo (36.), 2:0 Jezek (53.), 3:0 Ouedraogo (58.), 3:1 Patocka (60.), 3:2 Hofmann (68./Penalty), 3:3 Salihi (79.), 4:3 Jezek (87./Penalty)Admira: Tischler - Plassnegger, Windbichler, Dibon, Schrott - R. Schicker (67./B. Sulimani), Schachner, Mevoungou, Jezek - Ouedraogo (84./E. Sulimani), Hosiner (71./Toth)SK Rapid: Payer - Schimpelsberger, Soma (46./Pichler), Patocka, Katzer - Trimmel, Kulovits, Hofmann, Drazan - Alar (55./Burgstaller), Gartler (77./Salihi)Yellow Cards: Dibon, Windbichler, Toth, B. Sulimani Patocka, Burgstaller, Drazan (gw)