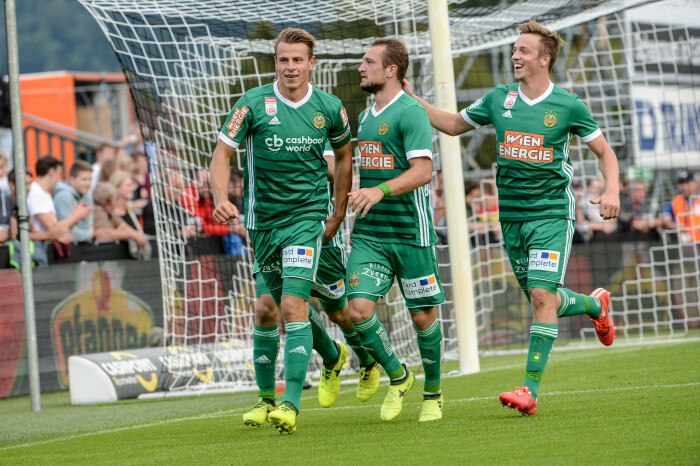 With the green shoots of recovery beginning to blossom in recent weeks, Goran Djuricin could have been forgiven for thinking that a trip to Altach didn't represent the ideal fixture at a time when his Hütteldorfers are beginning to build momentum. The Vorarlberg countryside has not been overly kind to Rapid, with the Green & Whites winning on just three of their previous twelve visits to Austria's Alpine west. But there was also reason to approach the game with renewed confidence: after beating LASK, Rapid were denied a famous victory in Salzburg last time out with what turned out to be the final kick of the match. And on Saturday there was to be more late drama in Altach as Rapid continued to build, ultimately salvaging a valuable point through Galvao's injury time equaliser. It was a dramatic finale to a dramatic end to end game that could’ve yielded both three and no points equally.

New attacking recruit Veton Berisha got the nod over both Joelinton and Giorgi Kvilitaia as the lone striker in Rapid's starting formation. At right back, Stephan Auer came in for the suspended Mario Pavelic, whilst there was a welcome sight for Rapid fans as Philipp Schobesberger made his first start since his return to first team action. Max Hofmann recovered sufficiently from a midweek illness to take a place on the bench; the experienced Mario Sonnleitner was drafted in his stead. There was more good news for the steadily emerging Dejan Ljubicic, who again found himself in in the starting line-up.

With the countryside sun shining, Rapid set about their task and nearly stole ahead just minutes after the kick-off, but Philipp Schobesberger's cheeky attempt to catch out Altach keeper Kobras from a free-kick from a tight angle grazed the top of the crossbar sparing the scrambling goalie's blushes (2.). It was the Green & Whites who came out on top of the early jostling for the right to dominate the ball, and as the minutes ticked by the Hütteldorfers confidence grew, as did the accuracy and sharpness of their passing football. It looked as though it would be simply a matter of time before Rapid took the lead: a tantalising low cross from Thomas Murg found no takers (16.), before Schwab turned provider for Murg, who drew a good save from Kobras (19.). Minutes later Schobesberger's cross-cum-shot landed invitingly at the feet of Berisha, who had two stabs at goal from close range, the first kept out by the onrushing Kobras, the second - from the rebound - poked wide of the target (32.). Rapid were dominating and playing some excellent flowing football. That the half time whistle went with the deadlock still intact provided the only black mark against a sterling first half performance. 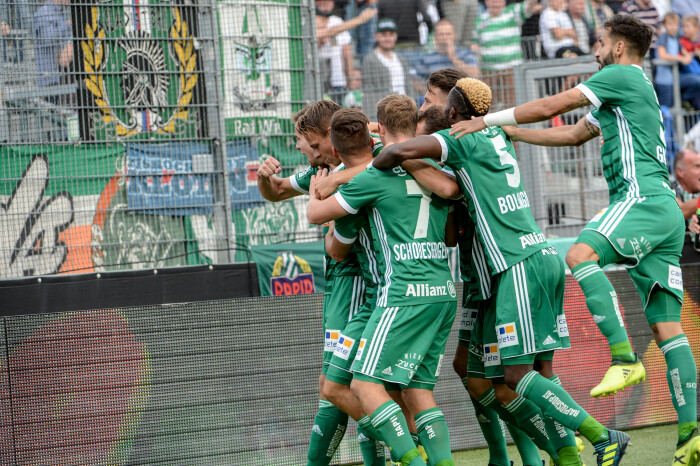 The half time break caused no disruption or change of momentum; indeed, it took little more than thirty seconds for Rapid to spectacularly take the lead - thanks to a moment of inspiration from captain Stefan Schwab. The Rapid skipper picked up the ball just over the half way line and drove forwards, deftly weaving in and out of attempted challenges. Schwab continued to drive forwards, eventually arriving at the edge of the Altach box, where he expertly curled a sweetly-struck left footed shot beyond the reach of Kobras and into the bottom left hand corner of the net - 1:0 and a sublime piece of skill from Schwab (46.)! And within 120 seconds of the restart Rapid could've taken the game away from the hosts completely: a deep ball behind the Altach defence was latched onto by Schobesberger, who had the vision and deftness of touch to hold the ball up before laying it off perfectly into the path of Louis Schaub. Schaub did everything right, side-footing the ball with bend and power past Kobras - but onto the underside of the bar (48.)!

Whilst Rapid's young team looks to be beginning to gel and develop, old demons still endeavoured to raise their heads. With Altach having offered little to nothing as an attacking force, the Vorarlberg side stormed back into a game that appeared to be going away from them: a swift move forwards pulled Rapid's defence out of shape and culminated in Aigner back heeling the ball in the penalty area to Honsak, who finished off a simple chance, slamming the ball past Richard Strebinger from close range - 1:2 (59.). It was a frustrating goal to concede, as up to that point in the match our goalkeeper had been little more than a spectator. But just a minute later Strebinger was called upon to make a save, keeping out a good effort Leinhart as the game threatened to run away from the Hütteldorfers (60.). Incredibly, just six minutes after scoring the equaliser, Altach took the lead: Substitute Tekpetey drove in from the right-hand touchline, and, under too little pressure, rifled home a low left-footed shot from the edge of the box into the near corner - 2:1 (66.).

The Rapid bench reacted by sending on attacking reinforcements in the shape of Kvilitaia and Joelinton, but most of the goal mouth action was resultant of Altach counter attacks. But in the closing minutes the Green & Whites re-established themselves as an attacking force, as firstly Murg attempted to emulate his captain, shooting from the edge of the box after a mazy run - unfortunately this time the shot went the wrong side of the upright. Then, Stephan Auer performed a convincing impression of a right winger, crossing low into the box towards Kvilitaia, who just failed to apply the finishing touch to the teasing delivery (84.). But there was still time for there to be a sting in the tail for the hosts, and it was provided by ex-Altach man Galvao. With time almost up Rapid forced a last-ditch corner. With the whole team crammed into the Altach box - including Richard Strebinger - a scruffy corner somehow found its way to the head of Galvao - and into the back of the net - 2:2 (90.)!

The delighted Galvao wheeled away to celebrate his first goal in Green and White, ushering his team mates back to the half way line in order that there may yet be time for a winner. Despite Galvao's enthusiasm, there were no further additions to the score and both teams settled for a hard-earned point. The result adds to the positive momentum Djuricin and his players are building, and with ASK Elektra next up in the cup, Rapid will be confident of continuing their recent good results.