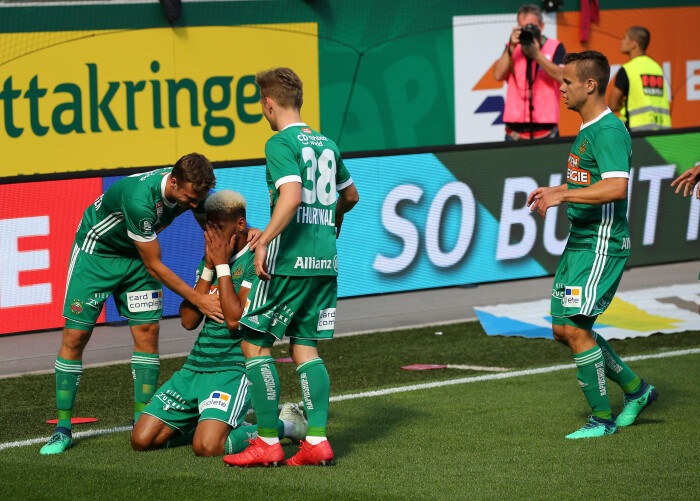 There were important sporting matters to attend to on Sunday as Rapid welcomed SCR Altach to Hütteldorf for the penultimate game of the season: A win would see the Green & Whites take a giant step to securing third place, possibly securing third spot outright depending on results elsewhere. But Sunday was also special for other reasons, namely the final home competitive appearance of a club legend. The Block West honoured Steffen Hofmann with an appropriate "Football God" display. Steffen will finally hang up his boots after a testimonial game following the conclusion of the Bundesliga season. Tears were shed, particularly by youth products such as Louis Schaub and Mario Pavelic, both Rapid through and through, who have little or no concept of a Rapid Vienna without the club's footballing hero. Andi Kuen will also leave Hütteldorf this season, but his severe injury prevented him from taking to the pitch to receive the on-field send-off he very much deserved. We wish Andi all the best with his recovery and new career away from Penzing.

Despite all the emotion in the air, there was a job to do on the pitch: beat Altach, keep Linz at arms' length and take a giant stride towards third place. Rapid started like a side who wanted tangible rewards for their continued improvement over the season, and nearly forged ahead in the opening minute when Murg's slide-rule pass opened up a shooting opportunity for Joelinton, only for the Brazilian to be denied by a smart stop from Altach keeper Lukse (1.). But just five minutes later, the early goal that Goran Djuricin and his players craved duly arrived: outstanding trickery from Schobesberger saw him throw his marker with a deft dummy, nutmeg the next beleaguered defender, then whip a teasing left-footed cross into the box which was met by Joelinton, who powered a bullet header past Lukse at the near post - 1:0 (6.)! On the quarter hour mark things got even better for both Rapid and Joelinton, when he seized upon a beautiful defence splitting pass from Dejan Ljubicic and - with a touch of fortune - rounded Lukse to prod home into the empty net – 2:0 (15.)!

Rapid continued to force the issue against an out of sorts Altach side who looked overwhelmed by the occasion: a shot from Schwab was blocked by desperate defending, before a clean strike from Ljubicic just cleared the crossbar. There was little by way of a repost from the visiting Vorarlberg side, as a party atmosphere, led by the Block West's incessant songs for Steffen Hofmann, swept around the Allianz Stadium. However, on the stroke of half-time there was to be a sting in the tail, as Altach grabbed a goal entirely against the run of play. Grbic stole in between the Rapid centre halves, brought a cross down on his chest, and competently beat Richard Strebinger with an accomplished finish to give his side a potential route back into the match - 2:1 (45.) Thomas Murg nearly restored Rapid’s two-goal advantage in the remaining seconds, back having got on the end of a well weighted Schobesberger cut back, he side-footed his effort narrowly wide of the post when the 22,000 onlookers expected the net to bulge. 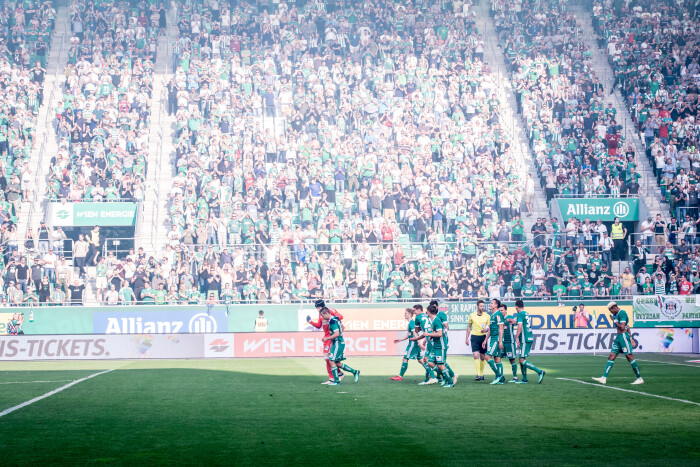 Altach's goal failed to spark any sort of second half fightback though, as Rapid picked up where they left off, dominating the opposition in every department. Stefan Schwab rattled the crossbar ten minutes into the second period with a thunderous free kick from fully 30 yards (55.), but was not to be denied three minutes later as he rose highest to head a corner beyond Lukse to restore a more realistic tint to the score - 3:1 (58.)! Schwab ran to the sidelines in celebration, holding aloft a shirt belonging to absent team mate Gio Kvilitaia, who sustained an awful injury in training. In the 66th minute the moment the crowd had been waiting for finally arrived as Steffen Hofmann took to the field for the final time in a competitive match on the hallowed Hütteldorf turf!

Incredibly - or perhaps not so incredibly (?) based on the career of our own Football God, the script that every romantic wanted to see unfolded: an attack down the flanks was only partially cleared by the Altach defence, with the attempted clearance landing at the feet of Steffen Hofmann a couple of yards inside the box. His first effort was blocked, but the ball bobbled back to him and he lifted the second attempt cheekily over the fallen Lukse and into the back of the net - 4:1 (72.)! Steffen ran the short distance to the Block West, with every Rapid player on the pitch joining in the celebrations. It was a truly historic moment now etched into the annals of club folklore!

News filtered in that LASK had lost in their match being played simultaneously, meaning that the win over Altach had also secured third place for the Hütteldorfers. More incredible scenes followed: the departing Joelinton was substituted and received his deserved applause, but having used up the substitute contingency, two further 'symbolic' substitutions took place, with firstly Louis Schaub being honoured for his contributions, before Steffen Hofmann got one last rousing send-off.

The celebrations continued long after the final whistle, with Steffen and his family being roundly honoured by the whole stadium, finishing with touching interaction with the Block West. Grabbing the microphone, the departing legend shouted: "Thank you for everything, long live Rapid!" Long live Rapid indeed, and long live the contribution and feats of Steffen Hofmann, Fußballgott!