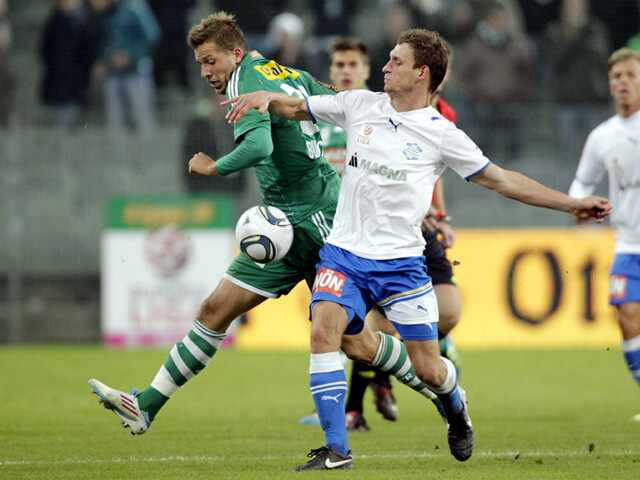 Following the unlucky defeat away to Admira last time out, Peter Schöttel again rotated the goalkeepers for the visit of his former club, with Jan Novota coming in for Payer. Sonnleitner and Soma formed the centre back partnership, while Guido Burgstaller and Rene Gartler got the nod up front. The early stages suggested that the Hütteldorfers had put the international break to good effect: an early chance for Trimmel signalled the Viennese' intent in the 3rd minute before Drazan put the hosts into a ninth minute lead. The Green White midfield combined beautifully before captain Steffen Hofmann played the decisive pass to Christopher&nbspDrazan who rounded the move off in style, finishing with aplomb at the near post. The goal did little to force the visitors from lower Austria into action. Peter Stöger in the opposition dug out was struggling to conjure anything out of his lethargic charges and it looked only a matter of time until Rapid would double the advantage. A corner on the half hour mark was as good as Wiener Neustadt had shown in the match, before in the 35th minute they were let down by a lack of quality up front as they failed to convert a decent counter attacking opportunity. Both teams returned to the pitch following the half time break unchanged, and the pattern of the game had also changed little: Rapid calling the tune, the visitors playing the role of passive spectators. Chances came and went for Burgstaller, Trimmel and Drazan in the opening 5 minutes of the half with only Rapid's profligacy in front of goal keeping the lacklustre visitors in the game. Salihi came on in place of Gartler as Rapid looked for the second goal that would all but finish of the match. But as the minutes wore on, the goal failed to materialise. A nasty clash between Troyansky and Novota resulted in a serious looking head wound for the Rapid keeper who had to be replaced by Helge Payer with 20 minutes left to play. Any hopes the guests had of getting back into the game looked to have ended when Simkovic left the field early: The Wiener Neustadt man was given his marching orders following a reckless tackle that left the referee with little choice but to produce the red card. Atdhe&nbspNuhiu came on for Rapid in place of Burgstaller, looking to provide the knockout blow. The goal that had been missing all afternoon then finally arrived, but unbelievably it was the visitors that got it. Markus Katzer was adjudged to have committed a foul in the penalty area and Helly slotted home the spot kick to seal a completely undeserved point for Wiener Neustadt. Seven minutes of injury time played out, due to the incident involving Novota, but Rapid failed to find a way through. It was an incredibly disappointing afternoon, the Hütteldorfers needlessly throwing away two important points against a very weak and unimpressive opposition.tipp3-Bundesliga powered by T-Mobile, 12th round:SK Rapid - Wr. Neustadt 1:1 (1:0)Hanappi-Stadion, 15.300, Referee OuschanGoals: 1:0 Drazan (9.), 1:1 Helly (85./Penalty)SK Rapid: Novota (75. Payer) - Schimpelsberger, Sonnleitner, Soma, Katzer - Trimmel, Pichler, Hofmann, Drazan - Gartler (65. Salihi), G. Burgstaller (78. Nuhiu)Wiener Neustadt: Siebenhandl - Klapf (19. Troyansky/74. Helly), Kral, Madl, A. Schicker - Stanislaw - Pollhammer, D. Wolf, Simkovic, Felix (56. Evseev) - SalkicY/R: Simkovic (77.)Yellow Card: Pichler, Katzer bzw. D. Wolf, Evseev (gw)