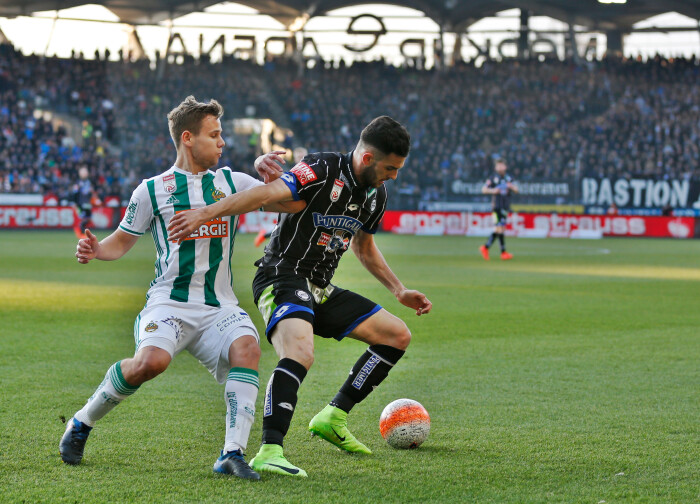 Sunday's game in Graz against Sturm marked a landmark moment for Mario Sonnleitner: the reliable center back took to the field for his 200th competitive appearance in Green & White. However, before the game Sonnleitner quickly dismissed the value of this achievement, explaining he was much more concerned about the team getting back on track with a positive result. The fierce rivalry between Rapid and the Styrians ensured that the away end was sold out weeks in advance - a fairly standard occurrence for matches between two sides boasting arguably the best and second best support in the land.

From the off the game had an open attacking feel to it, with both sides passing up half chances in the opening stages, with Joelinton for us, and Atik for Sturm both getting sights of goal. Unfortunately from a Hütteldorfer perspective, the lack of a killer ball that has been plaguing the teams efforts for the best part of the season was again in evidence in Graz. Stephan Auer tried his luck from distance but comfortably cleared the crossbar (8.), before Sonnleitner challenged for a header following a corner but failed to get the necessary purchase on the ball to threaten the hosts' goal (15.).

Just as Canadi's side appeared to be getting on top, controversy broke out: Andi Kuen challenged for a cross into the Rapid penalty area, and under immense pressure from a Sturm attacker, the ball glanced off his shoulder region. The Swiss referee surprisingly awarded a penalty, which ex-Rapid man Deni Alar converted to give Sturm the lead – 0:1 (21.). The goal increased Sturm's confidence on the ball as Franco Foda's side began bossing the match.

It was Rapid though who looked most likely to add to the scoring exploits, as Auer snatched at a good chance, firing over when well positioned following good work down the flank from Kuen (35.). Just minutes later Gio Kvilitaia thought he had brought Rapid level, but his headed effort from a corner drifted agonizingly wide of the far post (37.). A Christopher Dibon header rounded off the first half chances and the Hüttledorfers went into the break knowing they had plenty of work to do to salvage a result. 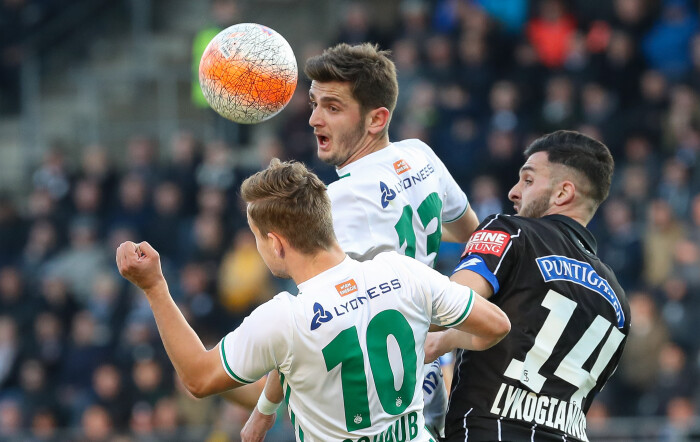 Steffen Hofmann and Thomas Schrammel came on at half time as the Rapid trainer team looked to add a touch of decisiveness in the final third. The changes seemed to work, as a somewhat rejuvenated Green & Whites went about their business with an added cut and thrust. With Sturm dropping deeper and deeper, Rapid managed to exert growing pressure, particularly from the flanks as crosses rained into the Graz penalty area. Again, just as Rapid looked to be working their way back into the game disaster struck: it looked for all and sundry as if a foul on Kvilitaia shoud've earned Rapid a reciprocated spot-kick, but the hitherto strict officials allowed the game to continue. The home side promptly broke and added a second through a stunning Lykogiannis shot from fully 32 meters out – 0:2 and lady luck had again well and truly abandoned the Hüttledorfers (64.).

Horvath nearly made it three with a vicious strike as the game entered the final fifteen minutes, but it was Joelinton who next got on the score sheet, burying a smart shot from just inside the penalty area – 1:2 and game on (80.)! Rapid applied constant pressure on the Sturm goal in the closing stages, but as substitute Schösswendter missed the target in the dying embers (90.), it became clear that the men from the capital would have to swallow another painful defeat. This loss in Graz all but leaves 4th place in the Bundesliga beyond the grasp of the ailing Hütteldorfers.