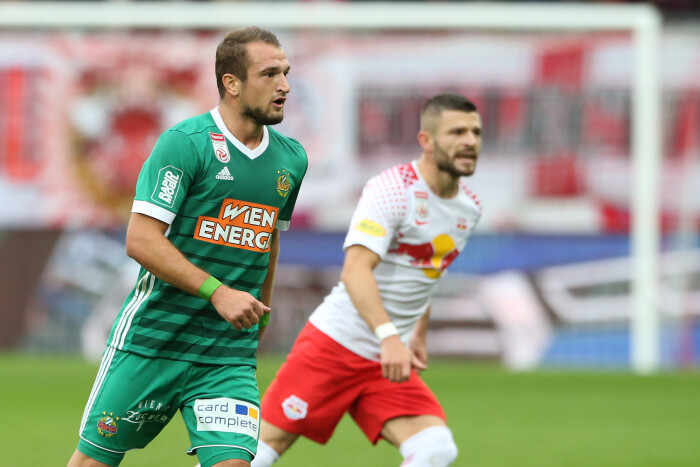 Until the dying embers of Sunday's away clash versus RB Salzburg, it appeared that Rapid were going to be celebrating a first victory in eight attempts against the reigning champions. A final score line of 2:2 did little to flatter Goran Djuricin's emerging side, who played the majority of the match at a man disadvantage after Mario Pavelic's harsh first half dismissal. A thrilling game ended with Rapid mind's contemplating what might have been after the home side’s injury time equaliser snatched what would’ve be a brave and memorable victory away from the Hütteldorfers.

New signing Veton Berisha was drafted into the starting line-up for his debut; whilst there was also a full debut for new central defender Lucas Galvao who was also handed a starting berth. With promising young talent Dejan Ljubicic again deployed in the heart of midfield, the Green & Whites made a confident start to the game, pressing their opponents and disrupting their usual flowing, attacking brand of football. Despite Rapid impressively feeling their way into the match, it didn’t take long for the first hurdle of the afternoon to present itself: Despite making contact with the ball before the man, Mario Pavelic clashed with Salzburg's Farkas. Apparently Pavelic raised his boot too high for the liking of the referee, who brandished a red card, despite it being a case of Pavelic's moment taking him into Farkas after both players had rushed towards each other to challenge for a bouncing ball (16.). With 75 minutes still on the clock, Rapid had to find a way to cope with a one-man disadvantage.

In front of 12,200 onlookers - 2000 of which made the trip from the capital - saw the game take off in the wake of Pavelic's premature exit: Haidara shot wide of the target when well placed (22.), before excellent positioning from Richard Strebinger helped him repel Dabbur's effort from a narrow angle (27.). Thomas Murg attempted to reply for Rapid, rattling the Salzburg post with a low, long range effort that drew an excellent diving save from keeper Walke, who tipped the ball onto the upright and away for a corner (31.). Murg's shot would prove the best offering from the Hütteldorfers in a first half that ended with the deadlock still in-tact. 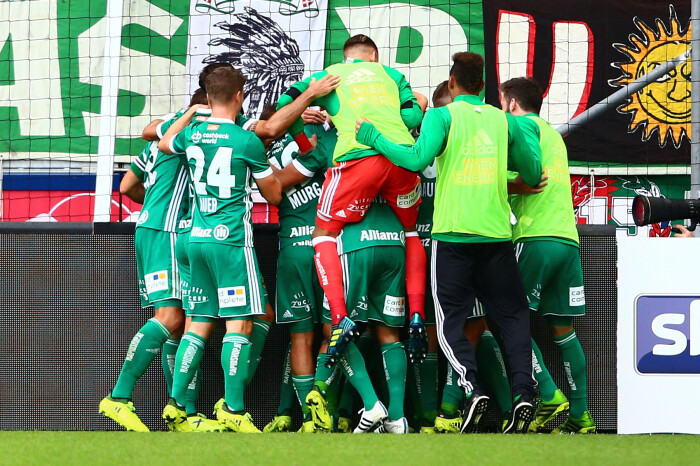 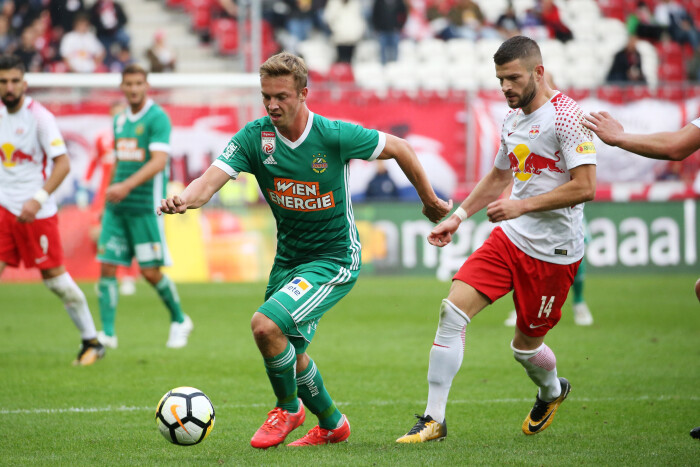 Joelinton was the unfortunate man who failed to emerge for the second half owing to the red card, as the Rapid bench opted to send on Stephan Auer to add some steel to the defence and fill the gap at right back, with Berisha pushed up top as the lone striker. With Rapid looking to adjust to the tactical and personnel switches, Salzburg's Berisha tested Strebinger with a decent effort (58), but it was at the other end of the pitch that the deadlock was broken. Boli Bolingoli played a long pass into the feet of the advanced Louis Schaub, who, from just inside the penalty area, laid the ball off to the on-rushing Ljubicic. The talented young midfielder swept a low shot towards the far corner and beyond the flat-footed Walke into the back of the net - 1:0 (60.)! Cue wild celebrations both on the pitch and in the stands!

Just minutes afterwards Rapid had the chance to make it 2:0, when the athletic Bolingoli burst forwards, latched onto a superb pass from Murg, and fired over the crossbar after driving into the box (65.). Salzburg looked to hit back, and the in-form Strebinger again got his angles right when he kept out Hwang's shot (66.). It took a huge slice of fortune for Salzburg to get back on terms, and it arrived via the boot of the unlucky Rapid skipper Stefan Schwab, who turned a cross from the left flank into his own net under intense pressure from a Salzburg attacker - 1:1 75.).

With an expectant home crowd now baying for the win, Rapid summonsed the spirit of yesteryear and went back on the offensive. Another deep ball from Bolingoli looked to set speed-merchant Philipp Schobesberger in behind the Salzburg defence; Walke charged out of his area to try and clear the danger but misjudged the situation, allowing Schobesberger to calmly round the stranded goalie before sliding the ball into an empty net from 35 yeards - 2:1 and ten man Rapid were in touching distance of a magnificent victory (79.)! When Strebinger again pulled off another tremendous save from Salzburg substitute Leitgeb in the 91st minute, it looked like Rapid had made it over the line. But with virtually the last kick of the game a moment of quality salvaged a point for Salzburg: Leitgeb crossed into the box, Dabbur connected sweetly with an over-head kick, two points disappeared for Rapid - 2:2 (92.).

A point in Salzburg is a great result, particularly with ten men, despite the pain of being denied right at the death. The nature of the performance will have delighted Goran Djuricin and his trainer team, as well as the thousands of Rapid fans watching in the stadium and beyond. Next week the Hütteldorfers travel to Altach with renewed vigour and a genuine sense that a corner is in the process of being turned. RAPID!!