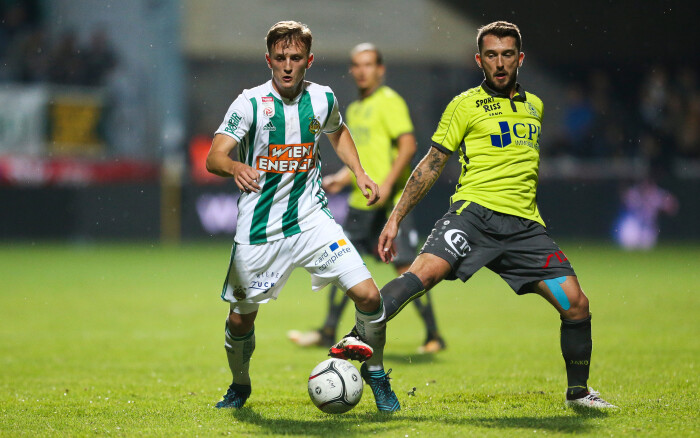 After two difficult league matches, the second round of the UNIQA ÖFB Cup threw up a tie - which on paper at least - looked as though it might be considerably more straight forward. The draw had paired the Hütteldorfers with ASK Elektra, a regional club currently occupying 6th place in the Viennese League. The game was played at the home of Wiener Sportclub, a stadium well-known to Rapid after last year's cup exploits.

With the Green & Whites overwhelming favourites before kick-off, Goran Djuricin used the game as an opportunity to rotate his squad and have a look at some players from the reserve squad currently staking a claim for first team involvement. In defence, experienced first-teamers Thomas Schrammel, Manuel Thurnwald and goalie Tobias Knoflach came in, whilst Steffen Hofmann again donned the captain's armband further up the field, alongside Eren Keles. The biggest surprise came in the shape of 21-year-old midfielder Aleksander Kostic, who was rewarded for his promising form for the reserves with a spot in the starting eleven.

The game got under way in front of 4000 onlookers, comprised mostly of Rapid fans, with less than 5 or 10% there to cheer on the nominal hosts. In rainy conditions, it was debutant Kostic who got in the afternoon's first shot on goal, firing narrowly wide of the far post (1.). The next goal mouth action of note saw Rapid take the lead: an Arase cross was spilt by the ASK keeper at the feet of Giorgi Kvilitaia, who gobbled up the simple chance from close range - 1:0 (19.). The Green & Whites continued to press: Kvilitaia headed over from Thurnwald's cross (19.), before the home keeper went some to redeeming himself as he parried to safety a searching low cross across the goal mouth (21.). ASK did manage to show a sign of life not long after, when unmarked striker Tahirovic headed over Knoflach's goal - a reminder for Rapid to be professional in their defensive work (22.). 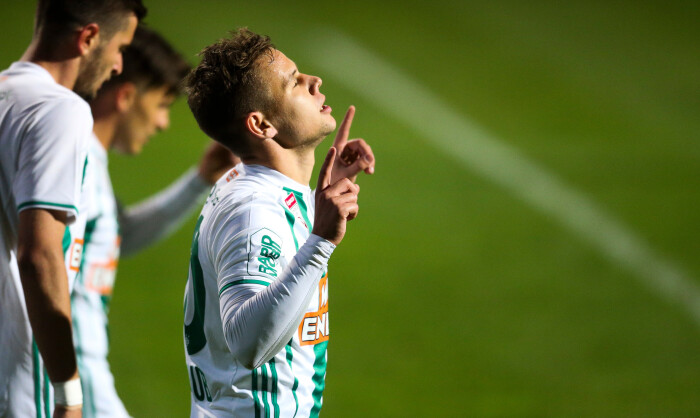 A calmer passage of play followed the hectic opening, with Rapid content to boss possession and move their opponents around and probe away. Despite looking in control of the match, Trainer Goran Djuricin was after more from his players and at half time sent on big hitters Louis Schaub and Thomas Murg. The injection of quality allowed Rapid to find another gear and start to kill off the match: Thanos Petsos - making his 'debut' since returning to Vienna on loan - found Kostic, Kostic fed Schaub in the penalty area, and Schaub did the rest, coolly slotting home from close range to double Rapid’s advantage (51.). In the wake of the goal, a non-too glorious moment followed for Kvilitaia, who received a second yellow and subsequent red card after the referee decided he had gone to ground too easily and sent him off for diving.

The numerical disadvantage did little to alter the flow of the game though, and in the 76th minute Rapid made the game safe with a third from the penalty spot: Steffen Hofmann was played clean through on goal, and was clearly felled as he rounded the keeper in the penalty area. Louis Schaub stepped up, and had no problems beating the goalie high into the left-hand corner - 3:0 (76.)! There was still time for one more goal, which arrived via the boot of unfortunate ASK defender Soura, who desperately tried to nick the ball off the feet of Joelinton after he had been played through on goal by another superb Petsos pass. The defender only succeeded in diverting the ball past his own keeper from the edge of the box to hand Rapid a fourth of the evening (84.). Murg had a late chance to add more gloss to the score (85.), but the game finished a very satisfactory 4:0 to the Hütteldorfers, who ensure their name goes into the hat for the next round, which will be drawn on Sunday, October 1st. Rapid!