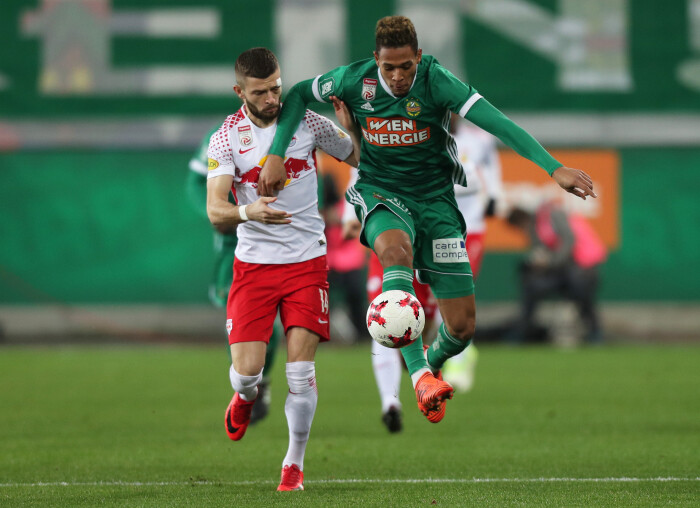 It was with designs on cutting the gap to top spot in the Bundesliga that Rapid went into Sunday's mouth-watering clash with RB Salzburg. Not since the days of the old Gerhard Hanappi Stadium had the Hütteldorfers beaten Salzburg on home soil, but a 12-match unbeaten streak in all competitions meant confidence was high and the belief was there. Nonetheless, no tougher task exists in Austrian football, and it would take a near perfect showing from the Green & Whites to secure the three points.

Trainer Goran Djuricin was shorn of the services of two of his first-teamers: Veton Berisha (hip) and Steffen Hofmann (abductor) had to pull out of the squad in the build-up to Sunday; whilst Louis Schaub started the game from the bench, as did the returning Tamas Szanto. There was more good news for Eren Keles, who was again handed a starting position at the heart of the Rapid midfield, as he had been for the victory over LASK.

However, as the game got under way there were some ominous signs: Miranda sent a header over the bar (4.), before Ulmer registered the first shot on target. But controversy is seldom far away in clashes between Austria's richest and Austria's tradition-richest clubs, and it took only until the 7th minute before the Rapid fans packed inside the Allianz Stadium could rightfully feel aggrieved: A searching ball in behind Salzburg's high defensive line was gathered in by Schobesberger, who, with a clear path to goal, had his progress halted by a tug on his shirt from Salzburg defender and last man, Miranda. Surprisingly, the referee brandished only a yellow card. From the resulting free kick the reigning champions again enjoyed a narrow escape, as goalie Walke produced a fine stop to keep out Stefan Schwab's curling effort (8.).

More Rapid pressure followed: a superb run from Murg saw him slice in from the right flank before drawing a smart low save from Walke. The ball dropped to the feet of Keles, who deftly chipped the stranded Salzburg keeper, only to see his shot hit the top of the crossbar and slide to safety (27.). Then, the pressure told: the resulting corner led to a free-kick, taken by Schobesberger, who fed a flat ball into the back post. It was kept alive by a back-post header and in stole Dejan Ljubicic, who got there first to stab home from close range - 1:0 (28.)! 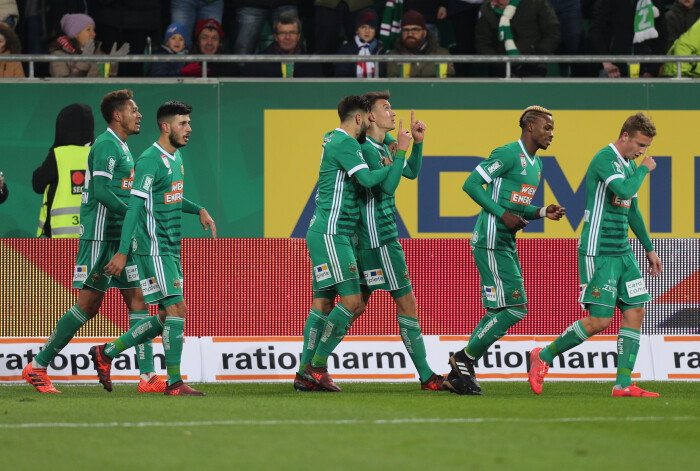 Having delivered a mature and composed performance, it appeared as though Rapid would preserve their lead going into the break, but the guests displayed their quality on the stroke of half time: A swift counter swept up field, with Ulmer buying his time before feeding the ball to the unmarked Hwang, who just got enough on his left-footed shot to beat Richard Strebinger from around the penalty spot - 1:1 and the complexion of the match had been drastically altered (45.).

Within seconds of the re-start, Goran Djuricin's second half plans lay in tatters: high pressing from Salzburg on the Rapid left flank led to a turnover of possession which was ruthlessly exploited: the ball was worked in behind the Rapid defence to Yabo, who cut back across the face of the goal from the by-line. The cross found its way to Ulmer, who, with plenty of work still to do, lashed the ball home from a difficult angle to put Salzburg into the lead (46.). Philipp Schobesberger sought an answer for the Green & Whites with a shot that flashed just wide of the post, but it was at the other end of the pitch that the next crucial addition to the score manifested: Schlager found the run of Yabo, who showed strength enough to hold off a couple of challenges before finishing smartly with outside of his right foot beyond the on-rushing Strebinger - 1:3 and in the space of five minutes Rapid’s promising position had completely evaporated. Things nearly got worse for the Hütteldorfers minutes later, but Strebinger produced a superb piece of keeping to deny Hwang with the Korean striker clean through on goal (57.). 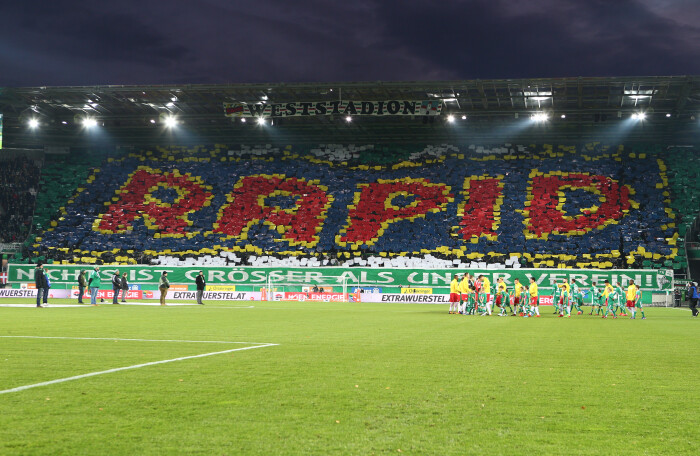 To their immense credit, Rapid kept going and continued to create chances, such as a header from Joelinton on the hour mark that went narrowly wide. Then, as Penzing ushered in the Rapid-Viertelstunde, a goal did materialise: neat interplay between Bolingoli and Schobesberger resulted in the left-back whipping an inviting ball into the box where it was met by Gio Kvilitaia (on for Joelinton), who powered a near-post header past Walke to drag Rapid back into contention - 2:3 (76.)! The Rapid goal music was to ring out one more time, but unfortunately prematurely: it appeared as though Kvilitaia had again scored with a header, the goal was initially given, but despite the celebration ringing around Hütteldorf, Kvilitaia's second was correctly disallowed after the linesman had spotted a hand ball (82.). Rapid continued to push, but there was to be no further drama as Salzburg held on to take all three points.

The Green & Whites' superb unbeaten streak had come to an end. But the Hütteldorfers had gone toe to toe with RB Salzburg and only narrowly come out on the wrong end of a narrow one-goal margin. Rapid now have an immediate chance to get back to winning ways: on Wednesday night Altach visit the Allianz Stadium. Similar levels of performance will surely give the Green & Whites an excellent chance to get back on the victory trail.