Irresistible first half performance seals the points in Mattersburg 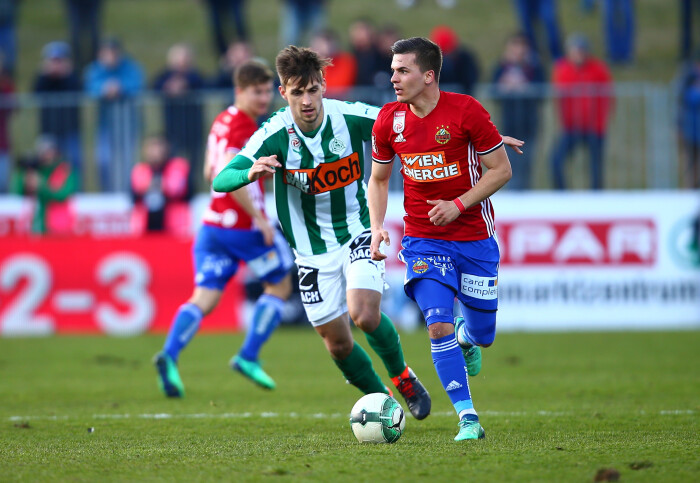 With all suspensions served and with personnel retuning injury free from the recent international fixtures, Tamas Szanto was the only name missing for Goran Djuricin, who had the all too rare luxury of picking from virtually a fully fit squad for the trip to Mattersburg. Rapid travelled to Burgenland looking to build on their excellent 5:1 win over Wolfsberg last time out in the Allianz Stadium, as the battle for third place continues. The Pappel-Stadium has provided a mixed bag of results for the Hütteldorfers in recent years, but on Saturday the Green & Whites delivered on their potential and exposed the gulf in quality between the two squads.

In the early throes of the contest both sides were looking to go on the offensive, albeit through differing philosophies. The agile and fleet-footed Rapid forwards such as Murg, Schaub and Berisha were looking to deploy their tricky quick passing on the edge of the Mattersburg box, whilst the hosts - as committed and awkward an opponent as ever - sought a more direct route to goal, testing the Rapid defence’s commitment with a series of deep, long passes as they went from back to front in double quick time.

But as the game settled down it was Rapid who managed to wrest control of the ball and dictate the tempo of the match. Veton Berisha burst through into the SVM box before firing a good effort just wide of the upright in the game's first goalmouth action of note (7.), but the band of Rapid fans who had made the short eastward journey wouldn't have to wait long to celebrate in earnest. An excellent tackle form Ljubicic dispossessed his opponent in an advanced position, with the loose ball dropping to the feet of Louis Schaub. Schaub attacked the right-hand corner of the Burgenlanders' penalty area, played a deft one-two with Thomas Murg which completely out-foxed the home defence, before guiding an expert shot beyond Kuster in the Mattersburg goal to hand Rapid the lead - 1:0 (17.)! The goal was a continuation of an excellent run of form for Schaub, who added to his strike for the Austrian national side against Luxembourg midweek. Just four minutes later, Thomas Murg went from provider to scorer when he picked up the ball on the right of the penalty area, danced infield beyond some ineffectual defending and squeezed a low shot beyond Kuster’s laboured dive and into the far corner - 2:0 (21.)! 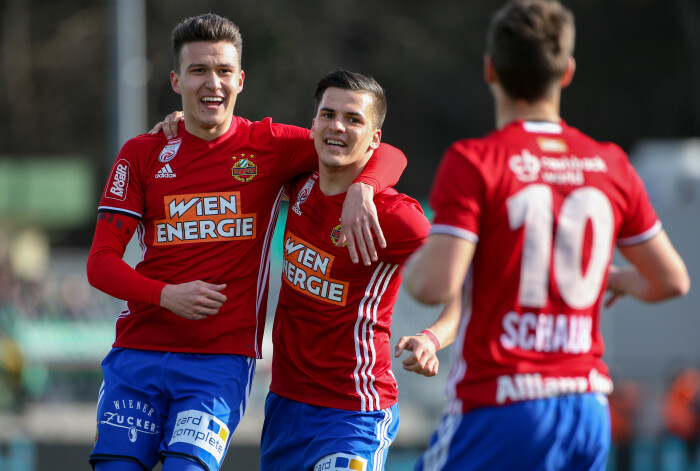 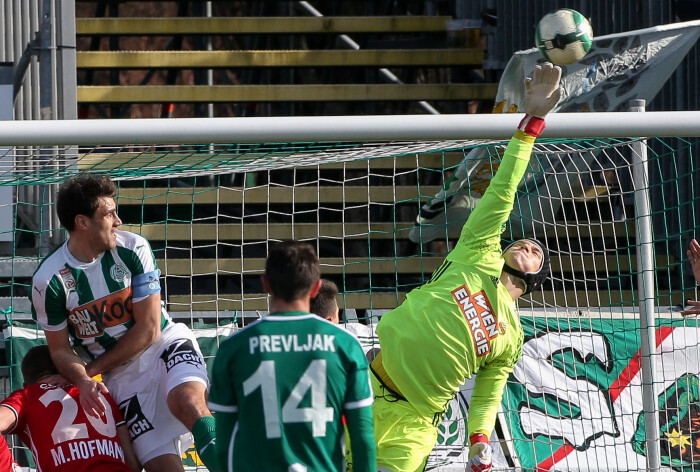 Goran Djuricin will have been delighted with not only how his side started the match, but that key personnel were again fully fit and available for selection. Donning the armband in central midfield, captain Stefan Schwab was the next to get in on the act: the effervescent Schaub weaved his way to the by-line, where he fed to the ball into Gio Kvilitaia, who in turn knocked the ball back to Schwab. With an instantaneous no-nonsense finish, Schwab stabbed the ball home from next to the penalty spot, dealing a knock-out blow to Mattersburg's already faint hopes of a comeback - 3:0 (27.)! Rapid were now pulverising a battered SVM defence from all angles, and it was little surprise when a fourth goal arrived before the interval. Boli Bolingoli showed great determination to rob his opponent of the ball, drove forwards and unleashed a well-hit strike goalwards, only for the ball to cannon off a defender and fall to Murg, who got to the ball split-seconds before Veton Berisha to sweep home into an empty net – 4:0 and the game was well and truly over as a contest (37.). At the other end of the field Prevljak sent a well- struck shot onto the crossbar; the rebound was duly turned into the net by the lurking Pink to reduce the home side's arears to 4-1. But it did little to mask how comprehensively Mattersburg had been outplayed by the Viennese during the first half.

With three goals between the teams, few will have been astonished that the second half took on a different complexion: looking to salvage some pride, a more determined and organised SVM side contested the second forty-five; whilst with a handsome three goal cushion, there was little incentive for the Hütteldorfers to be drawn into an end-to-end thriller that might have opened up space and allowed Mattersburg a route back into the match. That's not to say that Rapid were unable to produce more moments of quality during the second period: A vicious drive from Berisha slid just the wrong side of the post (46.); whilst Murg’s cheeky chip from the edge of the box just had too much on it and cleared the crossbar (54.).

It took until the final fifteen minutes before the hosts seriously threatened to further add to their tally, but when Ertlthaler did get a dangerous looking low shot on target, Richard Strebinger was on hand to push the shot round the post. In the closing stages Joelinton was forced off the field early having been on the wrong end of a nasty foul, in his place came Andi Kuen. Kuen nearly added his name to the scoresheet, but a ferocious shot from distanced cannoned back off the crossbar and away to safety (80.). Mattersburg capped an improved second half showing with a consolation from Okugawa meaning the game finished 4:2 to Rapid, a score which flattered the hosts ever so slightly.

The performance in the first half was excellent, the three points crucial: having temporarily surrendered third place in the Bundesliga table, the win in Mattersburg lifts the Hütteldorfers back into that all important top three. RAPID!!