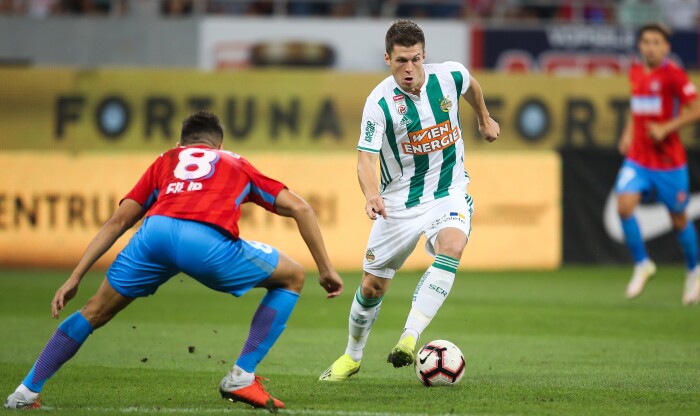 Before Rapid even touched down it Bucharest it was clear that the path to the group stages of the UEFA Europa League was going to be rocky and the tie still hung in the balance: the 3:1 win secured a week previously in Vienna was too close for comfort and the Green & Whites would need to hunt an away goal. In the build-up to the match the need for a positive approach to the game had been discussed in depth by the trainer team. The line-up for the return match with FCSB contained Mario Sonnleitner, who made an impressive 50th appearance in European competitions in Rapid colours. Unfortunately, a thigh problem had ruled out Boli Bolingoli, in his stead came Marvin Potzmann to cover at left-back, while Mert Müldür was drafted in on the opposite flank. As expected Andrei Ivan came in up front for the suspended Berisha.

A good 500 or so Viennese had made the trip to the Romanian capital to support their team as they tried to secure a place in the next round. A raucous atmosphere emanated from the stands, as FCSB started brightly and got on top early. After just twelve minutes Rapid's evening took a turn for the nervous, as Bucharest netted the early goal they craved: scrappy defending saw the ball break to Roman on the wing, his cross curled past the Rapid defenders and into the path of Gnohere, who side-footed a simple finish into the net - 1:0 (12.). A nerve-shredding evening was clearly in the offing. Rapid responded - Deni Alar registered his side as an attacking force with a long shot, which FCSB keeper Vlad initially fumbled, but grabbed at the second attempt (15.). But Rapid threatened the home side's goal all to infrequently during a first half in which they struggled to compete.

By contrast, the Romanians were hungry and effervescent, and it came as no huge surprise when they netted a second to lead on away goals on the stroke of half time: stand-offish defending on the right flank afforded the FCSB winger time to pick out a cross, static defending allowed Roman to stoop in and head the ball onto the unfortunate Potzmann and beyond Strebinger into the net - 2:0 (42.). Clearly now, Rapid's European future was in the balance, and the Hütteldorfers would have to find a way to score during the second period. 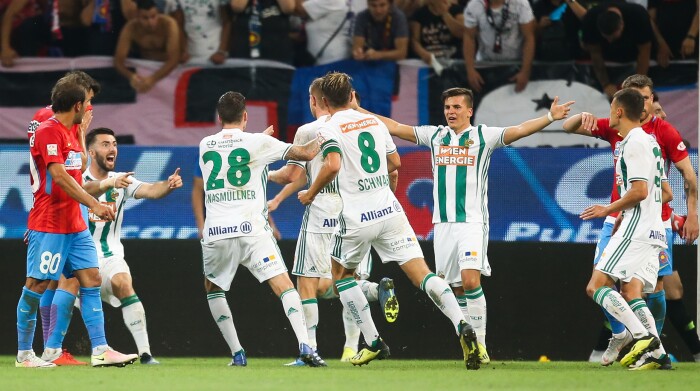 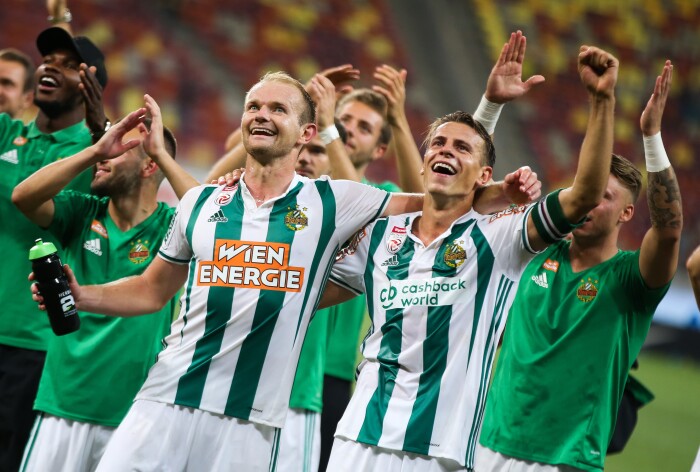 The outlook was bleak at the start of the second half, as the game quickly took on a similar pattern and feel to the first forty-five: A hooked ball forward was allowed to bounce, and Gnohere took advantage of more sluggish defending, as he tried to lift the bouncing ball over the stranded Richard Strenbinger. Luckily for Rapid, the forward got too much on his effort and cleared the bar (48.). The Green & Whites then thankfully managed to alleviate the pressure and create a chance of their own, but Alar's shot from Ivan's pass landed in Vlad's arms (54.). But the hosts continued to look the more likely to score, as this time Rusescu went close, heading just over after getting on the end of bending cross (58.). Slowly but surely though, Rapid had continued to grow into the second half, and on the hour mark, landed a crucial blow: A free-kick from Murg was saved by FCSB keeper Vlad, but pushed back into a dangerous area. Ivan kept the move alive, crossing back into the middle, with Vlad getting fingertips to the ball and pushing it Mario Sonnleitner at the back post, who on his landmark European night, somehow forced the ball over the line despite desperate attempts at a goal line clearance - 1:2 (62.)!!

Just minutes later Alar had a massive opportunity to put Rapid within touching distance of qualification: a precision pass put Alar clean through on goal, but with Andrei Ivan making a run next to him the forward was caught in two minds, and ended up lifting the ball towards Ivan, only for Vlad to get a touch and the defence to clear. It was a golden opportunity. Max Hofmann and Stephan Auer came into the fray, and with them came increased defensive stability. As the minutes wound down, Ivan thought he had won the tie for Rapid, but after an excellent solo run his powerful shot clipped a bemused Vlad and ricocheted onto the woodwork and away to safety (82.). With the tension rising to fever pitch on the stadium, Strebinger pulled off a world class save to keep Rapid's noses in front, as he dived full-length to tip a rasping drive from Rusescu over the bar. After what felt like an age the final whistle was finally blown and Rapid had prevailed in Bucharest: the Hütteldorfers sealed their return to European competition proper!