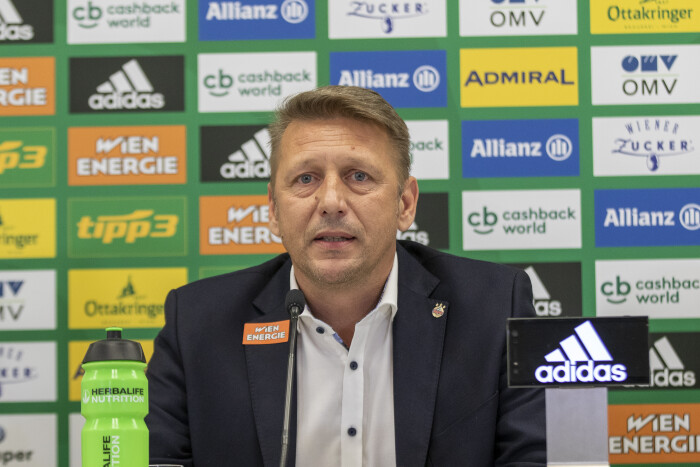 The 49-year old Viennese is a true club icon: After coming through the youth ranks as a player, he won the cup in 1995, the league in 1996, and was part of the team that reached the UEFA cup final in the same year. Between 1993 and 1996 he made almost 100 competitive appearances, scoring 15 goals.

After hanging up his boots, Zoran Barisic went on to take up various coaching positions with the club, spending seven years in the Hütteldorf coaching set up before finally landing the top job in 2013. His time as Head Coach was a successful one, yielding top three finishes in the Bundesliga and excellent performances on the European stage. Barisic also developed a reputation for nurturing youth players and turning to the club’s academy for fresh talent: Under his tutelage, players such as Louis Schaub, Dominik Wydra, Max Hofmann and Brian Behrendt began to flourish. Following a spell in Turkey, "Zoki" was most recently in charge of Slovenian top flight outfit NK Olimpija Ljubljana, where he won an impressive average of 2.13 points per game. Now he has committed to a different challenge with his boyhood club and returns to Vienna as Sporting Director.

Speaking on the appointment, President Michael Krammer said that looking at the past, it was clear that Barisic has the qualities needed to succeed in the role, and one key skill was his focus and belief in the promotion of young, homegrown players.

Zoran Barisic: "I'm so excited to be taking up this new challenge and will approach the position with total respect and full commitment. I’ll give everything to steer us into a new successful future and have confidence in the ability of the team around me, which is full of expertise and character. The first priority is to build a formidable first team squad – the flagship of our club. But away from that I’ll be looking at and analysing all the facets of the club around both the first team and the academy. It is important to me that we start building with all employees at the club a close personal and professional working relationship."