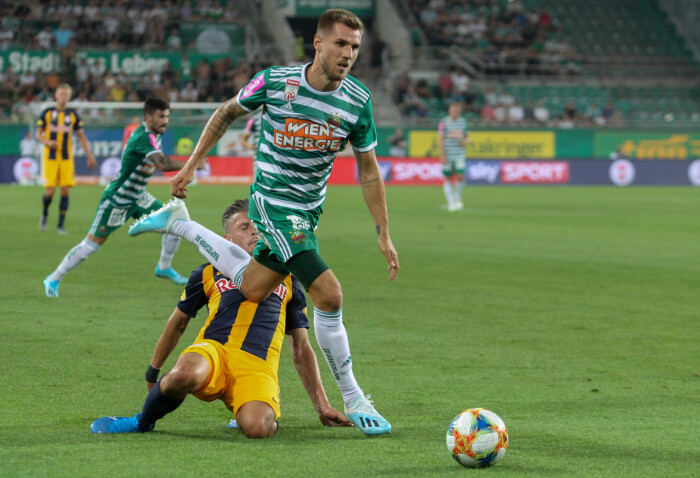 Months of preparation drew to a close on Saturday as Bundesliga football returned. Not only did it return, the first weekend of fixtures threw up a clash of the heavyweights as Rapid welcomed reigning champions RB Salzburg to Hütteldorf. An expectant 24,000 Green & White fans filed into the Allianz Stadium, no doubt casting their minds back to their side's 2:0 victory over the Red Bulls in spring. Didi Kühbauer threw up a few surprises with his first team sheet of the 2019/20 season, with all three summer recruits in the starting eleven: Thorsten Schick and Max Ullmann went straight in, as did Taxi Fountas, who lined-up alongside strike partner Aliou Badji.

In the bright summer sunshine pre-match formalities were completed and an intense, full-blooded match began to unfold. Salzburg's Haaland had the first chance of the afternoon, twisting and turning in the Rapid penalty area, but just as the striker thought he was in on goal a superb tackle from Mert Müldür saw off the danger (9.). Ten minutes later, the Hütteldorfers hit back with a chance of their own, when Fountas fired narrowly over the crossbar after profiting from a well-worked corner routine (18.). Stefan Schwab then went close, planting a header from a Schick cross into the side netting (20.).

Just past the half hour mark the afternoon's key scene unfolded as Salzburg manufactured the crucial breakthrough: Haaland overpowered Grahovac in midfield to come away from a 50/50 challenge with the ball, skipped past another attempted tackle before rolling a pass in behind the two Rapid centre backs for Minamino to run onto, who clipped the ball over the advancing Strebinger to put his side one up - 0:1 (35.). As Salzburg celebrated Strebinger lay motionless on the pitch having been caught with a heavy – but entirely accidental - knee to the head from Minamino. Urgent medical attention was given to the fallen Rapid keeper, who worryingly left the field on a stretcher. The first diagnosis suggest concussion, and we wish Richie a speedy and safe recovery. Substitute keeper Tobias Knoflach was the able replacement. And it was far from a quiet introduction for Knoflach: Salzburg passed up a double opportunity, as lax finishing costing the visitors a second goal (42.), while Rapid were breathing a collective sigh of relief when a header from Onguene thudded onto the crossbar on the stroke of half time (45.). 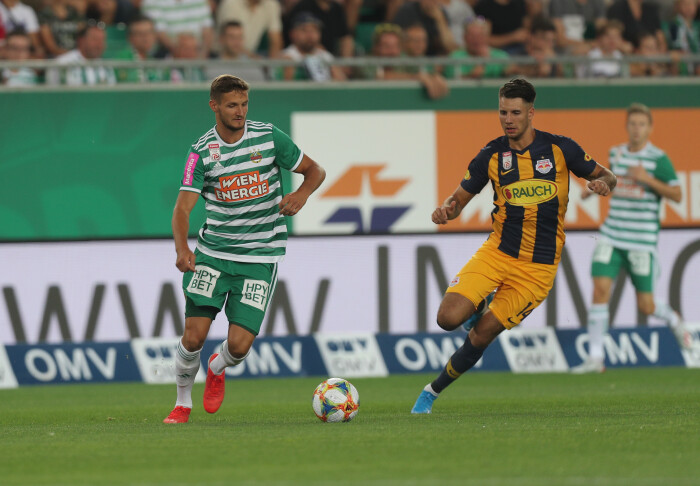 Badji (52.) and Daka(52.) traded shots as the second period got off to a lively start, before the Salzburg forward drew a smart low save from the Hüttedlorfers' substitute gloveman (58.). Philipp Schobesberger as thrown into the action in place of Badji as the Rapid bench sought to up the tempo, but it was fellow sub Christoph Knasmüllner who came closest to finding an equaliser, when his shot on the turn from the edge of the box squirmed agonisingly wide of the post by matter of inches (76.).

The game remained in the balance until the final ten minutes when Rapid were finally undone: the Green & Whites surrendered possession on the edge of their own penalty area after getting it wrong while trying to play out from the back, Salzburg quickly fed the ball into Okugawa who poked past Knoflach to seal the win - 0:2 and no way back.

It was a disappointing defeat, but Rapid must draw on their positive pre-season and showing last time out in the cup ahead of next week's trip to St. Pölten. Chants of support rang down from the Block West after the final whistle: the Rapid players had shown enough to give fans optimism and a feeling that when the team gels there is potential to right the wrongs of last season.