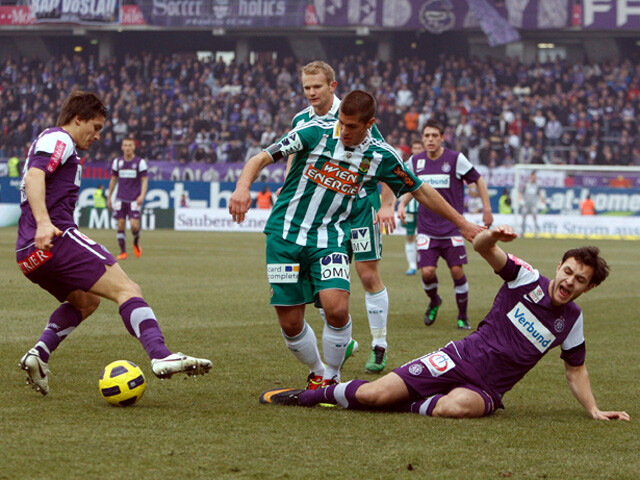 Rapid made the short trip across Vienna on Sunday to face fierce rivals Austria. Three points and a good performance were imperative for the Green-Whites as they looked to cut the Violets lead and the top of the Bundesliga, and reinstate themselves as serious title contenders. Suspended duo Tanju Kayhan and Markus Heikinnen were replaced in the starting line up by Stefan Kulovits and youngster Michael Schimpelsberger. Boris Prokopic continued in the "hole" behind the lone striker Hamdi Salihi. Cagey AffairThe first 10 minutes passed by at a good tempo. Rapid started well and looked confident, enjoying the territorial advantage and forcing a few early corners. The hosts had registered the only shot of the game up to this point, a tame effort from Roland Linz fired straight into Helge Payer’s midriff. Steffen Hofmann had a 17th minute sight of goal for Rapid, but his shot cleared Austria keeper Lindner’s goal by some margin. In the 25th minute Junuzovic skewed a left footed effort wide of the post in a rare attempt on goal from either team. Both sides had gone into their shell somewhat after the lively opening phase and it was very much a case of cat and mouse, with the defences firmly on top. Missing Final BallPayer was called into genuine action in the 32nd minute as Junuzovic drove in a decent low shot towards the far post. The Rapid keeper did well to react and kept the ball out with his foot. Three minutes before the interval, the Austria defence parted like the red sea to make room for Yasin Pehlivan. The midfield man stormed through the wide open gaps but fired his just wide of the post after having appeared to have done all the hard work in manufacturing the position. The half came to an end with both teams experiencing the same frustrations good wide positions had been created, but the final ball was lacking. Second HalfRapid survived a scare just a couple of minutes into the second half. A Soma header failed to clear a free kick and instead dropped to an Austria shirt but the attempted shot was scuffed and the follow up attempt blazed over the bar from little more than 10 yards. The first Rapid effort of the half came in the shape of a tame 59th minute Kulovits shot that Lindner gathered with ease. It was at least a sign of attacking in life in a game that was becoming ever more bogged down in a midfield tussle. Game Springs Into LifeThomas Hinum came on for the quiet Prokopic as the game entered the final third, coach Peter Pacult was looking to liven things up with some fresh legs in midfield. Just seconds after the change Austria debutant Dilaver had a free header cleared of the line by Schimpelsberger. Rapid responded with a break down the right hand through Steffen Hofmann, the captain delivering a beautiful ball across the Austria 6 yard box. The well positioned Hamdi Salihi totally missed his kick as he tried to turn the ball home from just 2 yards out with the goal gaping. The game swung back from end to end and a Mario Sonnleitner mistake let Barazite through on goal, Payer was on his toes though and came out to clear the danger. The best passage of play of the game so far continued, as just a minute later a Markus Katzer header from a Steffen Hofmann free kick extended keeper Lindner to the maximum. The young Austria keeper did exceptionally well to back peddle and push the goal bound header over the bar for a corner. It was just the shot in the arm the game needed, springing into life with just over 20 minutes to play. In Form Salihi Fires Rapid In FrontYou could sense that a breakthrough was going to come, and it did, in the shape of a 72nd minute Salihi close range finish. A floated Hofmann free kick was met with the faintest of touches by Sonnleitner, but it was just enough to deceive the home sides keeper who parried the ball into the path of Salihi. The Albanian striker gleefully accepted the gift to put Rapid in touching distance of the victory. Almost immediately, Pacult let his intentions be known by bringing on Patocka for Schimpelsberger in an effort to shore up the back line and preserve the slender advantage. Salihi nearly doubled Rapid's advantage with 12 minutes left on the clock as he latched onto a low Hinum cross, his crisp effort flying just wide of the upright. Rapid See It Through To Claim The Points Austria should have been level in the 79th minute as a Kulovits lapse in concentration let in Jun, who blasted the opportunity over from no more than 5 or 6 yards. It was a let off for the Green-Whites. Goal hero Salihi came off in the 90th minute to be replaced by Christopher Trimmel as Rapid looked to run down the clock. The Green-Whites used all their experience to see out the closing stages and claim the win that slashes their city rivals lead at the top of the Bundesliga. 25th round:FK Austria - SK Rapid 0:1 (0:0)Generali Arena, 13.100,&nbspReferee LechnerGoal: Salihi (72.)FK Austria: Lindner - Klein, Margreitter, Ortlechner, Suttner - Jun (86. Koch), Junuzovic, Dilaver, Stankovic (65. Liendl) - Linz, Barazite (78. Tadic)SK Rapid: Payer - Schimpelsberger (74. Patocka), Sonnleitner, Soma, Katzer - Pehlivan, Kulovits - Hofmann, Prokopic (62. Hinum), Drazan - Salihi (90. Trimmel)Yellow Cards: Suttner Katzer, Drazan, Sonnleitner(gw)