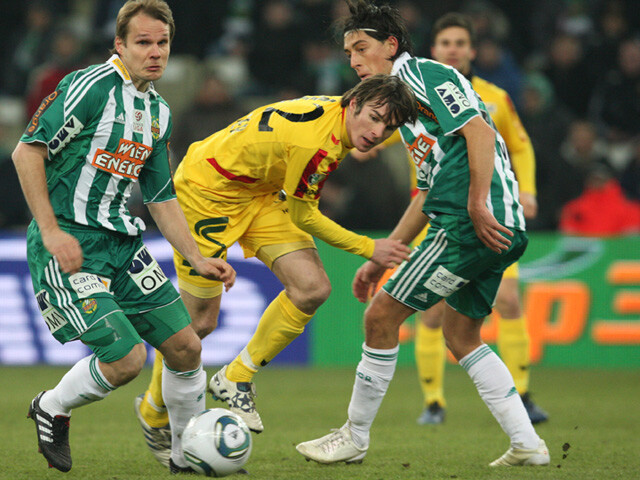 Bundesliga football returned to Hütteldorf on Sunday in the shape of visitors Kapfenberg. After two away games following the winter break, Rapid were looking for a win to inject momentum into their championship challenge. The big news on the injury front was the return of inspirational captain Steffen Hofmann back into the starting line up. Rene Gartler partnered Atdhe Nuhiu in a new look forward line for the Green-Whites.Rapid quicker out of the blocksThe first chance of the game came in just the third minute. Nuhiu stole away down the right hand side of the penalty area and fed a dangerous ball across to strike partner Gartler. The front man got the ball stuck under his feet when well placed, just failing to get his shot away. The Green-Whites again came close to breaking the deadlock just moments later, Wolf in the visitors goal kept out a point blank Gartler header. Rapid failed to capitalise on the rebound as the ball bobbled behind for a goal kick. Rene Gartler was denied for a 3rd time in the 10th minute, again with a header. A good cross from Kavlak was met with an excellent glancing touch from Gartler, forcing Wolf to once more fully extend himself to keep parity for the shaky visitors. Goal ruled outA slick looking Rapid put together another nice spell of possession in the 12th minute that lead to Hofmann being felled on the edge of the box. The Rapid skipper took the kick himself but couldn’t get the elevation to lift the ball over the wall. The 20-minute mark arrived with Kapfenberg just about managing to establish something resembling a foothold in the game. The visitors from Styria had managed to muster a couple of half chances of their own, but nothing that would cause Helge Payer too many sleepless nights. Veli Kavlak looked to have broken the deadlock in the 29th minute, but his clam finish was chalked off for offside. Kavlak was again denied, this time from a tight angle by Wolf, after great work from Nuhiu in the 36th minute. It proved to be the last Rapid threat of the half, the Hütteldorfers failed to build on their early. Second halfRapid emerged for the second half showing no changes to the line up. The first threat from the green whites came in the 49th minute, Rene Gartler with a quick swivel and shot that forced Wolf into action at his near post. An excellent Katzer cross was then superbly defended under his own bar by Kapfenberg's Mavric. It was to be in vain though, as the away side finally succumbed to the increased pressure. Yasin Pehlivan played an inviting ball low across the KSV 6 yard box and found Atdhe Nuhiu, the imposing striker could hardly miss from a matter of yards. A palpable sense of relief swept around the Hanappi and also hopes that the floodgates could now be forced open.Trimmel secures the pointsThe visitor’s best moment to date came in the 59th minute. A decent low free kick from Umut Kocin was kept out by Helge Payer at the foot of his left post. The game then went through a slight lull before the Hütteldorfers broke away to all but seal the points with just over 20 minutes remaining. Yasin Pehlivan made a break from midfield and fed substitute Christopher Trimmel. The winger's low shot sent Wolf sprawling in the wrong direction. It was a quick impact for Trimmel, who had replaced Steffen Hofmann just minutes earlier. A vicious 72nd minute Gucher drive threatened to halve arrears for Kapfenberg, but flashed just wide of the upright. Closing stagesRene Gartler came off to be replaced by Hamdi Salihi with a little over 15 minutes remaining having put in an excellent shift for his side. Nuhiu headed over in the 80th just before the late introduction of Thomas Hinum. Hamdi Salihi passed up a very presentable opportunity take make the score line 3:0 with just minutes remaining. Despite not adding to the score line Rapid were able to comfortably see out the game and record their first win since the new-year restart. 22nd round: SK Rapid - Kapfenberger SV 2:0 (0:0)Hanappi-Stadion, 14.400, Referee Prammer Goals: 1:0 (52.) Nuhiu, 2:0 (68.) Trimmel SK Rapid: Payer - Kayhan, Sonnleitner, Soma, Katzer - Hofmann (63. Trimmel), Heikkinen, Pehlivan (87. Hinum), Kavlak - Gartler (75. Salihi), Nuhiu Kapfenberg: R. Wolf - Welnicki, Mavric, Taboga, Kocin - Grgic (66. Lewerenz), Gucher, Fukal, Elsneg (60. Alar), Felfernig (80. Sencar) - M. Gregoritsch Yellow Cards: Pehlivan, Kayhan, Heikkinen Felfernig, Fukal, Grgic, Mavric (gw)