Rapid beaten on the road in Salzburg

With the disappointing defeat to WAC just three days before, and a big game against SK Sturm only four days away, Rapid head coach Didi Kühbauer opted for rotation and freshness in the match day 30 clash with Salzburg. With Mateo Barac suspended following his dismissal against Wolfsberg and Dejan Petrovic also missing after picking up a fifth yellow card, change was the only option on the day, but the nature of the switches will have surprised some. Japanese striker Koya Kitagawa was brought in (having scored his first competitive goal in Green and White against Salzburg), Yusuf Demir was handed a start in midfield, and alongside him were several other home grown talents in the form of Leo Greiml, Dejan Ljubicic, Maximilian Hofmann and Lion Schuster.

Our new-look squad started very much on the front foot, and early in the game our high pressure was pushing Salzburg back. Kitagawa started and finished the first real move of the match when he played a one-two with Thorsten Schick, before firing over the bar from the edge of the box (5’). With Rapid remaining solid in the challenges, we pushed forward again, and a neat exchange between Kitagawa and Taxi Fountas in the D almost led to a big chance, but Ramalho got a foot in at a timely moment for Salzburg (9’). Salzburg made their first foray into our penalty area a little later, but on his 150th Rapid appearance, keeper Richard Strebinger didn’t need to intervene.

We stayed on the attack, and created our next shooting chance when Kitagawa played a nice ball into Srdjan Grahovac, however that shot was also hammered over the bar (18’). It’s not easy to remain in control away in Salzburg, but for the first half hour the Green and Whites had looked very comfortable, and it was just a question on finding a killer chance on Stankovic’s goal. The nature of the performance up to that point only made it more of a blow when Salzburg struck first against the run of play. A relatively harmless shot from Patson Daka received a looping deflection off the leg of Leo Greiml, making it suddenly unreachable for Strebinger in goal, so with their first effort Salzburg had somehow gone in front (33’). It remained 1-0 until the break, a bitter scoreline for our boys as they headed down the tunnel. 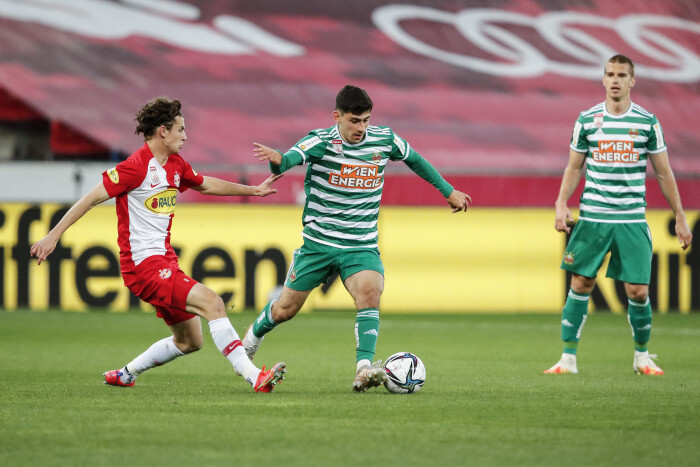 90 more minutes under the belt: Yusuf Demir is still weeks away from his 18th birthday 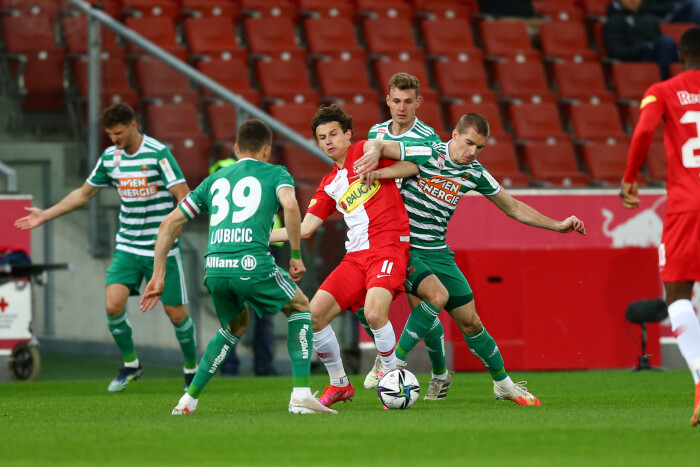 It was an intensive, but for the most part fairly contested game in Salzburg

There were no changes at the break, and just two minutes after the restart Rapid almost found a way to level things up. Fountas did well to win the ball, but with Demir well-placed, the final pass was not quite accurate enough. Strebinger was then called into action for the first time in the game, as Bernede curled a delightful shot goalwards from range, only to see Strebi spring across goal and tip the ball behind (50’). After that, the hosts upped the ante and began to assert control. Junuzovic struck a low shot across goal which came back off the post, but Salzburg retained the ball and with the next cross into the box, two strikers fluffed their attempts, before the ball fell fortunately to the deadly Patson Daka who fired in to make it 2-0 (56’).

Didi Kühbauer looked to the bench with a double substitution in the 64th minute, bringing on Ercan Kara and Filip Stojkovic for Taxi Fountas and Thorsten Schick. Kara made an impact right after his substitution, but his pass to Kitagawa was cleared by Ramalho at the last second. Another change came in the 70th minute: veteran Mario Sonnleitner made a 356th appearance for Rapid and Christoph Knasmüllner also came on, while Leo Greiml (who was on a yellow card) and the industrious Koya Kitagawa were withdrawn.

As Salzburg had the two-goal cushion, the action of the game had rather slowed, but 21-year-old Lukas Sulzbacher did get to make it a memorable night as he came on for his Bundesliga debut. Our fresh faces pushed for a goal to get us back in the game, but Stankovic denied Knasmüllner (80’) and then made a terrific diving stop to prevent Hofmann scoring with a header (81’). Hofmann would later receive his marching orders for raising an arm in an aerial duel, so he’ll be missing for our next match.

With the game virtually over at 2-0 in injury time, Strebinger prevented a third by denying Daka his hat-trick, but Salzburg were not to be stopped this season, and when the whistle blew they were deservedly crowned Bundesliga champions once again. Wals-Siezenheim once more proved to be no happy hunting ground for Rapid, but our season continues on Sunday with a massive away game at SK Sturm in Graz!