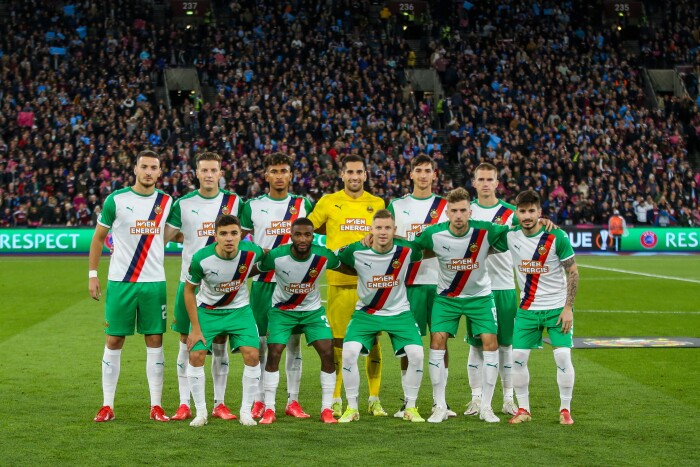 On Thursday evening, it was finally time for match day two in the UEFA Europa League group stages, and the trip to the London Stadium to face West Ham United that we’d been waiting for. It was an extra special occasion, as for the first time since the pandemic began, our visiting fans were allowed to travel; around 1,300 of our incredible supporters made the trip to soak up the atmosphere in the fittingly rainy English capital.

With around 50,000 fans inside the stadium to celebrate West Ham’s return to European football, somehow it was our fans who made the most noise and gave the players what felt almost like home support. On the London turf, Pauli Gartler was between the sticks, Emanuel Aiwu returned in the back four, Christoph Knasmüllner started in the centre of the attacking midfield trio, whilst Ercan Kara led the line.

Both teams went for it early on, and the wet turf added a touch of pace to the passing and raised the tempo. Kara hammered the first shot over the bar from long range inside two minutes, before Gartler got himself swiftly warmed up with a good one on one stop (6’). He couldn’t help when Rice’s header came back off the post for the hosts, but he reacted brilliantly to deny Antonio who was in on goal moments after, although the offside flag was raised in the end anyway (8’). Rapid continued to battle bravely and despite the quality of the opposition, the team were going for it. We won the ball back in West Ham’s half, but with three players bursting forward, Taxi Fountas’s shot was too central to open the scoring (14’).

The Green and Whites were constantly working well to deny the home team opportunities in the danger area, and with some well organised play, Rapid were able to go forward themselves on occasion. That made it all the more painful when one moment of weakness in defence was punished with a ball over the top to Antonio, who squared across goal for Rice to slot in and give West Ham the lead (29’). The response was markedly positive though, and Max Ullmann whipped in a cross from the left which ended up with Kelvin Arase. His angled shot was blocked, and a follow up flew over the top (38’). Ullmann then cut inside himself and slammed a right-footed drive towards goal, but that was blocked too, and the hosts held their 1-0 lead at the break. 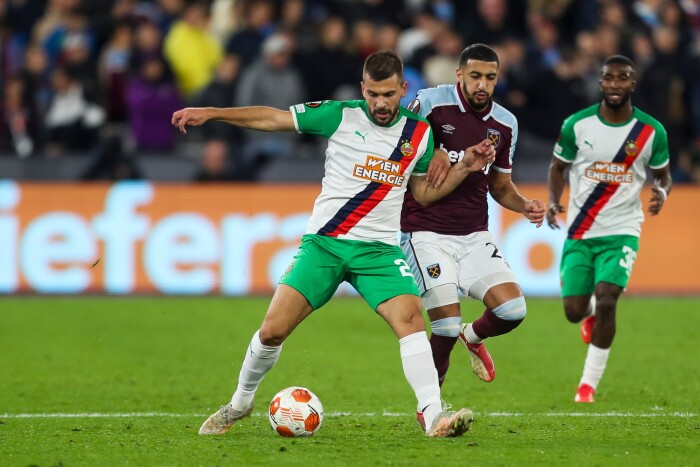 Rapid had a first half performance to build on, and they subdued the hosts for large spells after the break, so much so that again the away fans were creating the atmosphere inside the vast stadium. After Ullmann pushed forward but failed to find space in the area, and Noble had a shot charged down at the other end (60’), it was time for a whole host of substitutions to be made. In Green and White, it was Koya Kitagawa ad Marco Grüll who came on with half an hour to play.

Arase got the next shot away as Rapid looked for a leveller, but he couldn’t generate enough power to threaten the goal (66’). Then came a big moment in the match, Grüll burst into the box from the left and appeared to be clipped as he went to ground. The referee immediately pointed to the spot, but upon inspection from the VAR, our attacker had clipped his own heel after putting the Hammers’ defence in a spot of bother; the penalty was overturned (72’). Unlucky for Rapid.

As the game entered the closing stages, Bowen had a chance for 2-0, but after rounding the keeper, a combination of Gartler and Kevin Wimmer pressured him enough that he couldn’t find the back of the net (81’). Rapid were still well in the game at just one goal down, but the more we pushed, the more we left spaces for West Ham to run down the clock. Fornals forced a tremendous diving save from Gartler in injury time, before Benrahma exploited a bit of room in the box to tuck away the second goal and put the tie beyond Rapid: 2-0 (90’+4).

It was a cruel way to close out a very respectable performance in London, and it leaves Rapid in a difficult spot in the group. Nonetheless, there were certainly positives to take from the trip to the U.K., and attentions will immediately turn to Didi Kühbauer’s 100th game in charge, as we gear up to face WSG Tirol in the Bundesliga this weekend.