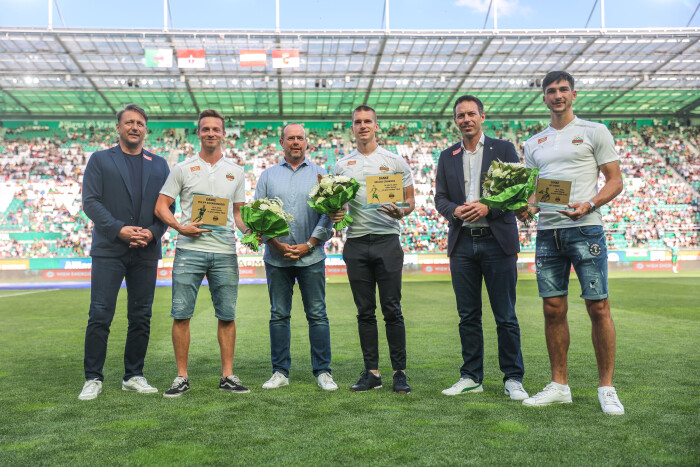 Before kick off, Philipp Schobesberger, Srdjan Grahovac, Leo Greiml and Kelvin Arase (not pictured) were given a fitting send-off - THANK YOU for your service in Green & White!

For the 31st and penultimate round of the ADMIRAL Bundesliga season, we welcomed the reigning champions Salzburg to Hütteldorf in beautiful summer conditions. More than 23,000 Rapid fans spent their sunny Sunday in Hütteldorf and did not want to miss a big match, with points much needed in Rapid’s hunt for European football. From a personnel point of view, however, Ferdinand Feldhofer had to do without numerous players again for various reasons (Hedl, Hofmann, Zimmermann, Greiml, Schuster, Dibon, Grahovac, Druijf, Binder and Stojkovic all missed out). It was far from an ideal situation heading into the game, so a very strong performance would be required.

The extra kick of motivation from the stands was keenly felt in the opening minutes, as the fans pushed Rapid towards early chances on goal. Kelvin Arase’s caressed shot was wide (1’) before seeing a header miss the goal by inches (4’). The Green & Whites were well in the contest, but it was the guests who struck first after a quick passing move opened up space for Luka Sucic to score (10’). That early goal only served to raise the tempo, Marco Grüll tried twice from distance, but missed the target on both occasions (24’, 26’). Feldhofer’s XI didn’t let their heads drop, and continued fighting for every ball, and seven minutes later, Arase again had an opportunity to level the game, only to put a shot too close to the keeper. The best chance of the half was still to come though, as Moritz Oswald broke away on a good run down the flank, before being denied by the keeper at the last moment (44’). With that, a battling first half came to a close with Rapid trailing 1-0. 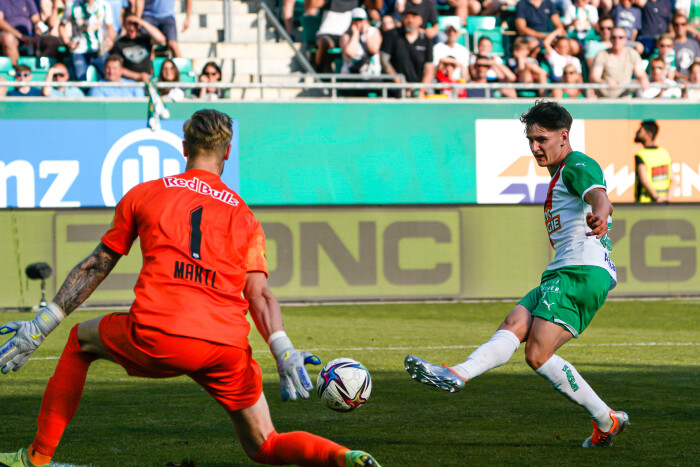 Youngster Moritz Oswald with one of several Rapid chances in Sunday’s game. © GEPA

Our team came back out onto the field full of energy, and Marco Grüll had the first chance, but the last few centimetres of accuracy were still missing (52’). Coach Feldhofer reacted and brought in Yusuf Demir for Moritz Oswald (60’), and the substitute immediately went close with a shot from distance after a corner kick (62’). It took ten minutes until the next chance fell our way when Marco Grüll's direct free kick was blocked (72’). Kelvin Arase also had an incredible chance, but his technically excellent half-volley first hit the post, then the goalkeeper and finally the crossbar - the ball just wouldn't go in on the day (73’)! In the Rapid quarter-hour it was again our number 36 who had a go from the side, but again the goalkeeper was there to punch the ball clear (79’).

The scoreboard should have looked different by this point given the number of chances the boys in Green & White were able to create. A triple substitution aimed to add the necessary fine-tuning, Dragoljub Savic, Oliver Strunz and Christoph Knasmüllner came on for Thorsten Schick, Kelvin Arase and Robert Ljubicic (80’). Right after the change, our captain Pauli Gartler made a great save to stop the visitors sealing the win (81’), and only six minutes later Drago Savic made a perfect pass into Salzburg territory, but once more the goalkeeper was in the right place (87’). In the 90th minute, Savic again crossed the ball perfectly for Strunz, who headed superbly towards goal, but the keeper's fingertips were able to touch the ball agonisingly away. Unbelievable chances, and each time only millimetres were separating Rapid from success - but after 94 minutes the defeat was confirmed.

Despite a strong team performance, numerous chances and a hard, united fight, our XI could not reward themselves with any points. Now, a decisive game awaits us in the race for Europe, away against WAC next Saturday - keep your heads up and keep fighting, Rapid!