At the end of an eventful season, the final match for Rapid would be the European Qualifying Play-Off Final Second Leg. After a 2-1 away win against WSG, the job on Sunday was to see it over the line at home. Head Coach Ferdinand Feldhofer had to do without Maxi Hofmann, but Thorsten Schick was fit in time and able to start. WSG Tirol were the only team in the league against whom Rapid hadn’t dropped a single point during the season, and if that run continued, European football would be sure to return to Hütteldorf next term.

Both teams started cautiously in the match, yet the first scoring chance came the way of the hosts inside five minutes, when Marco Grüll was able to assert himself well to get a shot in, but it just missed the target (4’). Just five minutes later, it was our number 27 again, this time with a header that was again only inches away (9’). Our attacking football continued in the same vein, as Christoph Knasmüllner brought a shot dangerously close to the WSG goal, but the keeper was still there to deny Rapid with his fingertips (10’). The scoring chances were almost a wake-up call for the Tyroleans, who themselves pressed for the opening goal in the next twenty minutes. But then our team found the perfect answer: Marco Grüll laid a pass off in front of the penalty area towards Robert Ljubicic, who curled the ball with placement and power from about 20 meters out, right into the far corner of the net. GOAL, 1-0 (29’)! With the opening goal, Feldhofer's team had the game well under control, but no further scoring chances fell either way before the interval. Our team was still trying to link up in front of the opposition penalty area, but the final decisive passes didn’t quite click, so we went in 1-0 up, with a 3-1 aggregate lead. 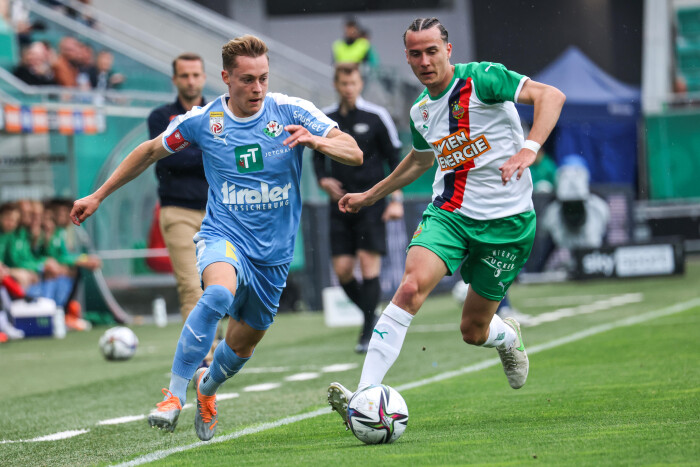 …and Nicolas Binder sealed the deal with his first Bundesliga goal near the end! © GEPA

The second half began with the teams unchanged. Berni Zimmermann provided the first scoring opportunity in the 52nd minute, but the shot didn’t trouble the WSG keeper too much. Ferdinand Feldhofer brought on some fresh legs, sending Moritz Oswald onto the field for Christoph Knasmüllner (57’), but then it was Zimmermann again, who needed only to tap the ball in after a square ball from Marco Grüll, but the goalkeeper somehow saved with his foot at the very last moment (60’). Four minutes later came a Green & White double switch; Niki Binder and Drago Savic came on for Marco Grüll and Berni Zimmermann (64’). The Tyroleans, sensing that their chances were ebbing away, pressed hard for the equaliser, and in the 70th minute Pauli Gartler held his nerve and just about saved a header with his fingertips. Jonas Auer went for a powerful volley in the 86th minute but it missed, although it ultimately mattered little, as just one minute later there was a high ball from Jonas Auer, which Niki Binder skillfully brought under control, rounded the goalkeeper one-on-one and calm-as-you-like, knocked the ball over the line for his first Bundesliga goal. YES! 2-0 (87’)! Youngster Pascal Fallmann also came on for Thorsten Schick (89’), but that was the last noteworthy action in the game - the victory was ours!

With that result, Rapid were able to seal the play-off win, and book ourselves a place in Europe for next season! We will start in July in the UEFA Europa Conference League 2nd Qualifying Round. Now, it's time to recharge our batteries, refresh, regroup, and we will be well-prepared to start again next season. Thanks for your support, Rapid fans!