Four players made their competitive debuts for SK Rapid on Friday evening in the first round of the UNIQA ÖFB Cup, namely newcomers Patrick Greil, Nicolas Kühn and Michael Sollbauer, as well as Rene Kriwak, who was still part of our second team in the spring. As captain, the returning Guido Burgstaller led the starting XI out in his Carinthian homeland after a rainy warm-up session. One of the new summer signings, Aleksa Pejić, was not yet able to take part though, the two-time Serbian international, who is consequently considered a non-EU foreigner, does not yet have the required permit for participation. The club expects the documents to be issued by the authorities very soon, so that the midfielder, who turned 23 last Saturday, is eligible to play in the European Cup, Bundesliga and ÖFB Cup in the future.

In goal was Niklas Hedl, the central defence was manned by veterans Kevin Wimmer and Michael Sollbauer, whose parents' home is only about 20 minutes away from the home ground of our opponents SK Treibach, but it was the forwards who were busy at first. After just three minutes, Ferdinand Feldhofer’s side created the opening chance, but Burgstaller missed the target after a hint of offside in the build up. Just a minute later, a good shot from Nicolas Kühn was stopped by Treibach keeper Patrick Böck, who used to play with Guido Burgstaller at youth level!

The home keeper was able to demonstrate his abilities on several occasions, as Rapid created a number of chances against the Regional League side who sat deep and played aggressively, but by no means unfairly. Rene Kriwak had a shot blocked (8’) before Patrick Greil’s follow-up went over the top. With half an hour played we led the shot count by eight to zero, and shortly after came our biggest chance so far. Burgstaller set up Kriwak for the opener, but the Treibach defence somehow turned the ball onto the post and away for a corner (35’). Two minutes later came a terrific double chance for Patrick Greil; the ex-Klagenfurter controlled brilliantly with his chest, saw a shot blocked, and then went after the loose ball with an acrobatic overhead kick which just missed the target. The hosts were battling bravely, and they carved out a first shot on goal after 40 minutes, but Niklas Hedl had little trouble in making the save. That left it at 0-0 as the teams headed off for the half time break; a scoreline which delighted all at the sold-out stadium, except for the 300 travelling Rapid fans, of course! 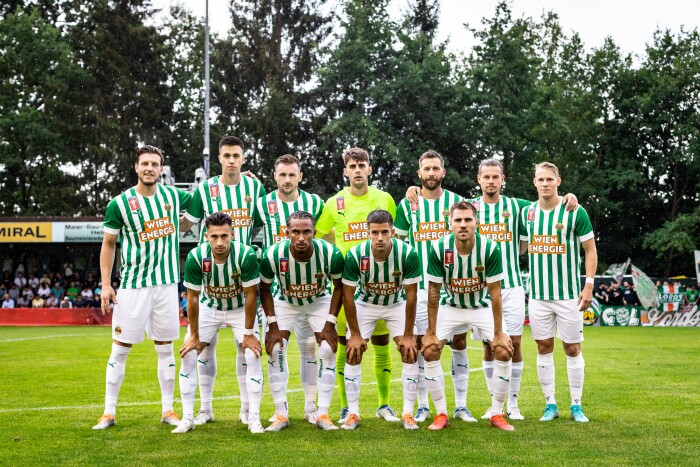 Our starting XI for the first competitive fixture of the new season! © Red Ring Shots

Up and Down Second Half ends with Injury Time Elation

Immediately after the restart, the hosts first had two dangerous attacks, forcing Hedl had to intervene on the edge of his penalty area. In the 57th minute, the Green & White coaching team made the first two changes, Bernhard Zimmermann replaced Rene Kriwak and Martin Koscelnik made his debut for the yellow-carded Thorsten Schick. Despite all the dominance, the big chances for our team remained scarce and the countless set piece situations didn’t bring any real goal threat. At the beginning of the Rapid quarter-hour two more changes were made on the part of our team, Patrick Greil and Marco Grüll made way for Christoph Knasmüllner and the next newcomer, Ante Bajić.

After that, some good opportunities came our way, especially for Guido Burgstaller and Emanuel Aiwu. Meanwhile, the ball boys called it a day a bit before time, early in the Carinthian evening, so in the later phase of the game it felt like it took forever to continue once that ball went out of play. Consequently, just after the last switch (Moritz Oswald came on for Nicolas Kühn), seven minutes of stoppage time were announced. The crucial goal was coming, but would we get one in time? In the 93rd minute, a finish from Bernhard Zimmermann was blocked, but just 60 seconds later, it was time and "local hero" Guido Burgstaller powered a fantastic cross from Jonas Auer into the net with his head! With that, the game was over and qualification for the second round was achieved after 97 minutes of very hard work against a disciplined and ambitious opponent. 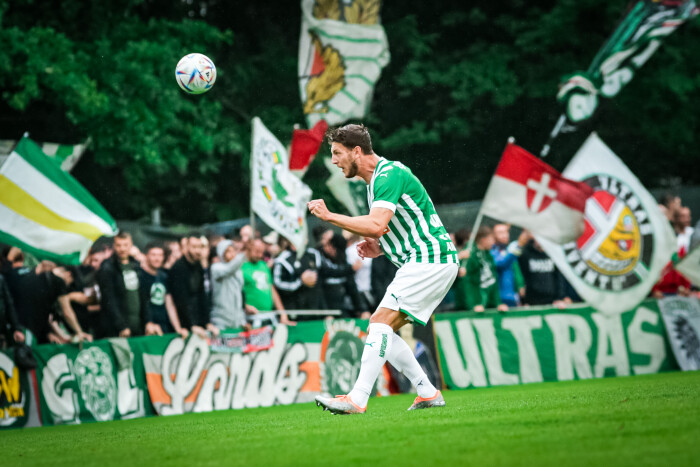