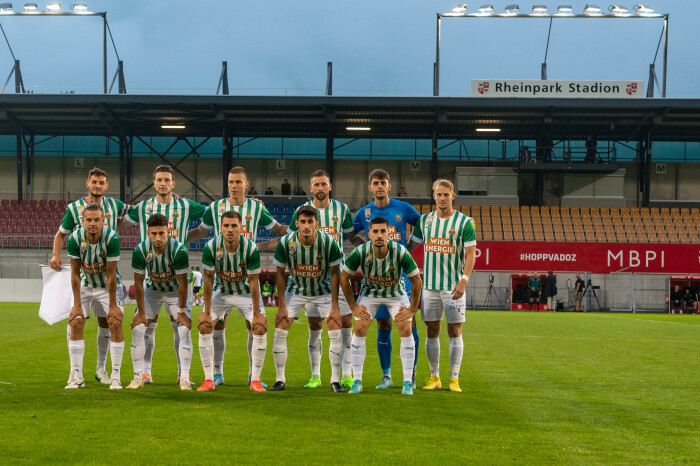 This was the starting XI that took to the field in Liechtenstein. © GEPA

Rapid overcame a shaky start on the road to seize the initiative in Liechtenstein, but after suffering an early setback and surviving a few scares, the second half performance only yielded one Green & White goal from Ferdy Druijf, meaning the tie is finely poised after the first leg.

On Thursday, the latest in a long run of European qualifiers took us to Liechtenstein, where Ferdinand Feldhofer’s XI would face FC Vaduz. With the first leg of the play-off being away from home, we were looking to bring things back to Vienna for next week’s game with a good starting position, from which we can hopefully go on and secure participation in the UEFA Europa Conference League. The role of the favourites was clearly assigned before kick-off, but the side from Liechtenstein had already sprung several surprises on their way to this play-off, so an exciting clash between teams from neighbouring countries stood before us. In addition, Kristijan Dobras, an ex-Rapidler, was in the squad for the hosts. Our Hütteldorfers knew about the importance of the game and we wanted to make it a happy journey back, especially for the almost 1,000 fans who made the trip for this tie.

However, it was the Liechtensteiners who showed right from the off that they were definitely not to be underestimated. Keeper Niki Hedl was tested right away with two well-placed shots, but our number 1, however, was able to parry them to safety (3’, 8’). The first offensive showing from our side came through Patrick Greil, but the last pass to Marco Grüll did not quite hit its mark, so a dangerous scoring opportunity went begging. The tenth minute was a low point for our side, as the hosts combined well to get the ball downfield, and a good cross was turned into the net to spark jubilant scenes on the Vaduz bench. 1-0 (10’). That early goal served as a wake-up call, and Rapid were able to get the ball under control a lot better from that point on, however the big chances were still not falling our way, and attacks were being broken up by passes that lacked accuracy.

The hosts took advantage of our lack of rhythm, and from mistakes in our build-up play they created a few chances to increase the lead, although they weren’t able to do so. Shortly before the break, Patrick Greil delivered a good long ball into the Vaduz box, but intended target Ante Bajic was just a whisker away from the all-important contact (39’). We had another chance from a set piece in a promising position, but that one was blocked (42’). We still had to rely on a bit of luck, as Vaduz shot cannoned off the crossbar and down towards the ground before Niki Hedl could take the sting out of it. With that moment safely navigated, we went in at the break just one goal down.

Ferdy Druijf and Yusuf Demir helped turn the tide at the break, but it was only enough for a draw. © GEPA

Ferdinand Feldhofer reacted to the first half display by bringing on Jonas Auer, Ferdy Druijf and Yusuf Demir, and the game gathered momentum from our point of view. Following a nice combination via Yusuf Demir, a Thorsten Schick cross landed only in the hands of the goalkeeper (51’), but two minutes later, it was again Yusuf Demir who skipped past one defender after another with his trademark dribbling skills, then passed to Ferdy Druijf, and the striker hammered the ball from almost 25 yards out, firing an unstoppable shot in to the far corner! That was the leveller, 1-1 (53’)!

The goal should have brought further momentum to our side, but it was FC Vaduz who had the next chance. A corner kick was converted by the hosts, and we had a let-off from the linesman, whose flag went up due to an attacking player blocking the view of our keeper Niki Hedl (65’). Roman Kerschbaum came on for Aleksa Pejic (67’), and just before the Rapid quarter-hour there was a double chance for Demir; the first effort was blocked by the keeper, with the second he went for placement over power, but the keeper could again recover and make the stop (74’). The final chance of the game also fell for our number 10, but this time the ball sailed just inches above the Vaduz crossbar (90’), and so the first leg finished 1-1.

With that result, it’s at least all still up for grabs next week in Hütteldorf, so we’ll focus fully on our preparation, and we’ll aim to finish the job in the second leg in Vienna on Thursday.