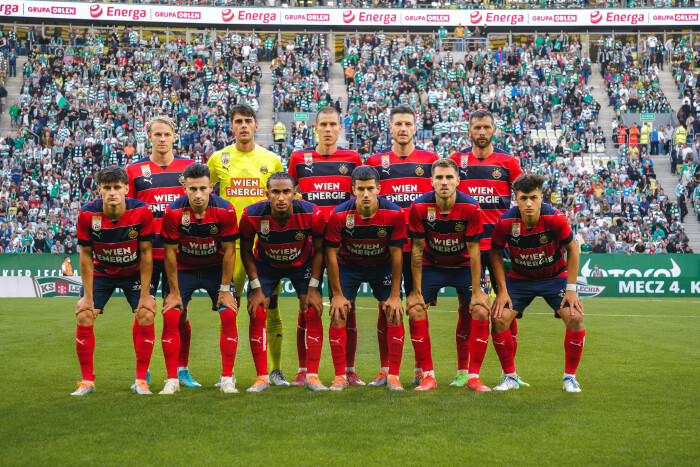 This is the XI which started on a successful night in Poland. © GEPA

A brave away display saw two first half goals make up for drawing a blank in Hütteldorf last week, as Rapid overcame a tricky test to see off Lechia in Gdansk and move a step closer to the group stages.

7:40 p.m. in Gdansk on Thursday: SK Rapid took to the pitch for the second leg of the 2nd qualifying round of the UEFA Europa Conference League with determination, motivation and an insatiable will to win. An unusual scenario played out, in that there was a green and white team on the pitch, but it was the hosts who were in our usual colours, which is why our new away kit in our founding colours was used for the first time. Emanuel Aiwu, Ante Bajic and Patrick Greil were also back in action and ready to don the red and blue jerseys. However, Michael Sollbauer had to miss out due to back problems and Martin Moormann has also been ruled out for several weeks with a knee injury - get well soon! Nevertheless, our team knew what was needed to reach the next round.

As expected, the first few minutes of the match were full of pressure, with the hosts having the first chance after a corner kick (3'). But Ferdinand Feldhofer's team were steadily gaining ground in the game, and they showed ruthless efficiency, as the fans were able to cheer with the first real Rapid chance: Marco Grüll passed the ball to Nicolas Kühn, who set himself confidently on the edge of the 16-yard box and took aim; the strike was slightly deflected, but the ball landed in the back of the net to give Rapid the lead, 1-0 (16')! The next blow for the hosts was soon to follow, because only two minutes later there was a more than justified penalty after a foul right on the edge of the area on Guido Burgstaller, who was clipped as he ran through - Marco Grüll put the ball on the spot and dispatched it calmly for 2-0, GOAL (18')! The opening minutes could not have gone better, and even after establishing a clear lead, our team was still in the game and pushing for the Gdansk goal. The next opportunity of note involved Berni Zimmermann, who tested the goalkeeper with a delicate sidefooter (34'). Shortly before the break, Nic Kühn came forward again and had a chance to finish, but the shot was just wide. We therefore headed in to the changing rooms after a strong first half, holding a two goal lead. 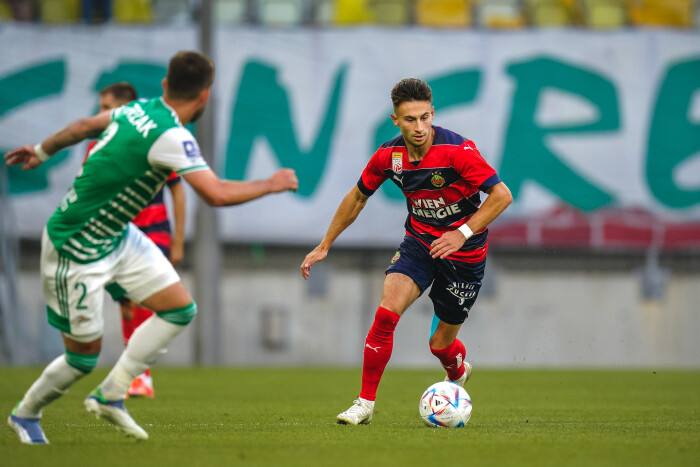 Nic Kühn grabbed his first goal for Rapid and gave us a precious lead! © GEPA

After the break, the hosts came out onto the field more offensively, as expected, but the first notable Chance again fell to Nic Kühn, who had a blocked shot after a fortunate one on one moment from Berni Zimmermann (50'). Three minutes later, luck was on our side when assist provider and goal scorer Marco Grüll stopped the ball on the goal line (53') and Niki Hedl also distinguished himself with a save (56'). In the 64th minute, Nic Kühn tried again from an angle, but only hit the goalkeeper's body. Ferdinand Feldhofer sent two new faces on the field, Ante Bajic and Maxi Hofmann came on for Berni Zimmermann and the effective Nic Kühn (65'). New man Ante Bajic showed himself immediately with some chances, but in the 69th minute he couldn't quite score at the near post. Youngster Nikolas Sattlberger sent in for Moritz Oswald (73'). The game shifted to our half as the hosts pressed for their much needed comeback, which unfortunately proved somewhat successful with a high close range strike from a cross in the 83rd minute, 2-1. With that, Martin Koscelnik was brought on instead of Thorsten Schick and it was not only really loud in the stadium, but also really exciting. The Poles continued to shift the game forward, advancing dangerously into our penalty area time and again in search of the equaliser. But our team held them off with all our strength, and on the break in injury time Ante Bajic even found himself alone before the keeper with a chance to kill the game, but he was denied at the very last moment as he dragged the ball around the goalie (94'). After 94 minutes, the away victory was sealed, and those exciting and nerve-racking final minutes were over!

After a strong performance, our team thus secured a place in the third qualifying round of the UEFA Europa Conference League and will therefore face Neftci Baku in Azerbaijan as early as August 4th. Let's go, Rapid!