A strong start from the visitors left Rapid’s second half efforts as little more than a consolation, as Wolfsberger AC won in Hütteldorf.

Off the back of a 1-0 away win against SCR Altach, Ferdinand Feldhofer's XI welcomed Wolfsberger AC in Hütteldorf for the 8th round of the ADMIRAL Bundesliga. In the last six games against the Wolfpack we alternated between victory and defeat - three times our team secured the points, yet three times the Carinthians did the same. Looking at that little run, it should have been our turn to win this time, but unfortunately statistics and theories do not always equate to results, as this game would prove.

The game started with the expected high energy levels from both sides, Nic Kühn searched for Roman Kerschbaum in the penalty area, but an attempt to control the ball with the heel failed (3’). Only moments later an attempted shot by the Carinthians was blocked by Martin Moormann, but the defender was unlucky to see the ball come off his elbow - after a VAR check, the inevitable penalty kick was given, which the guests converted for a 1-0 lead (11’). Only a minute later, the ball was in our net again, but the goal fortunately did not count due to an offside position in the build up (12’). However, in the 14th minute the Lavanttalers knocked in a second goal which would remain valid on the scoreboard. 2-0 to the guests (14’). A reaction needed to follow from the home team, but the shock of conceding the second goal was a big one, and Rapid were rocking. Luckily a third “goal” from WAC didn't count due to another offside position (17’). Our team tried urgently to get the game under control, a plan which succeeded only partially. Ferdinand Feldhofer sent Jonas Auer onto the field instead for Martin Moormann (27’), but even this change did not bring the desired swing of momentum. The first halfway dangerous scoring chance came for Aleksa Pejic, who curled a cross into the hands of the keeper (37’). The forward movement was there in the build up phases, but in the last few yards we always lost the ball or didn’t manage to keep the attack going until the very end. Before the break, however, Marco Grüll had a great chance to get us back into the game, but the goalkeeper just managed to block a precise low shot (43’), and Nic Kühn and Guido Burgstaller also stumbled in front of goal when the next big opportunity arose (44’), so we went in at the break staring at a disappointing 2-0 scoreline. 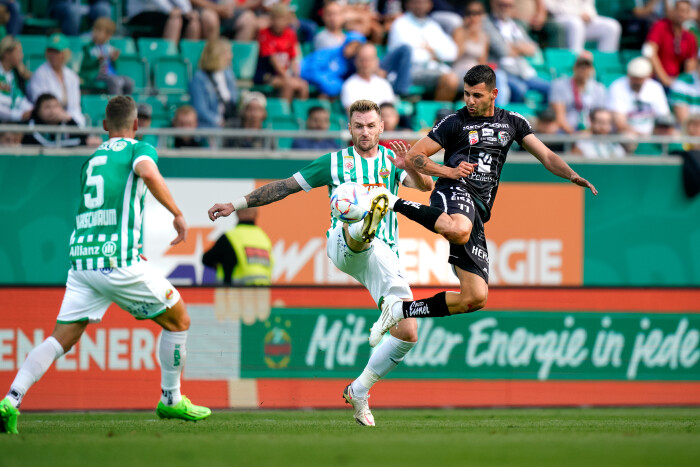 The reunion with his former club didn’t go as planned for Michael Sollbauer and co. © GEPA

Our team came out of the dressing room with two changes, Berni Zimmermann and Thorsten Schick came on in place of Patrick Greil and Martin Koscelnik (46’). The tempo was now also higher from our side, and the attacking efforts were already clearer to see than in the first half - initially Marco Grüll put a ball over the top from an acute angle (47’), before Roman Kerschbaum placed a header too centrally, and into the hands of the keeper (48’). Then, our keeper Niki Hedl distinguished himself, as he kept his nerve and scooped the ball off his opponent's foot in a one-on-one duel (49’). The game continued with a dangerous square ball, which Guido Burgstaller could not reach despite plenty of effort (53’). Marco Grüll also tried with a direct free kick, which flew through the wall, but was ultimately no problem for the keeper (55’). Kevin Wimmer missed shortly after with a header at the goalkeeper (58’), and not long later it was Guido Burgstaller’s turn to try with a header, but he was offside (64’). With their first chance of the second half, after being under the cosh for a long spell, Wolfsberg had the ball in the goal again. The officials initially decided that it was offside, but after another VAR check, the goal stood, 3-0 to the visitors (66’). Ferdy Druijf and Leo Querfeld came on for Aleksa Pejic and Kevin Wimmer (69’) as we looked for a twist in fortunes from somewhere. Our team tried to get forward, but Roman Kerschbaum's well-hit shot was also blocked (72’). Just under ten minutes later, Nic Kühn fired a volley just wide of the goal (82’) and Leo Querfeld also took aim from distance, but could not beat the goalkeeper (83’). In the 90th minute, however, our team managed at least to score a consolation goal, as Berni Zimmermann's second attempt found its way into the net, reducing the lead to 3-1.

After 94 minutes, however, a clear and deserved defeat was sealed, and we’ll have to regroup with all our strength ahead of upcoming away games against Salzburg, and also our future ÖFB Cup opponents, WSG Tirol.