ÖFB Cup: Win in Wattens sees us into the Quarter-Finals

Rapid started well in Wattens but had to overcome a number of difficult spells against a solid WSG side, as we benefited from a missed penalty, and eventually progressed to the next round of the Cup following a flurry of late goals which came from the substitutes’ bench.

After an eventful few days at the club, the team turned their focus to Tuesday’s UNIQA ÖFB Cup tie against WSG Tirol, at the Gernot Langes Stadium in Wattens. A place in the quarter-finals was at stake, as sporting director and interim head coach Zoran Barisic made his bow in the Rapid dugout for a third stint in charge. He and his coaching team had to make do without Moritz Oswald, Dejan Petrovic and Lion Schuster, whilst Leo Querfeld had to serve a one-match ban following his red card in Sunday’s game against SV Ried. Nicolas Kühn and Kevin Wimmer weren’t fit in time to feature in the game, and unfortunately we had to add a name to the injury list during our time in Tyrol, as Niki Hedl sustained a tendon injury in his finger, meaning Pauli Gartler played in goal.

We definitely started the brighter of the two teams, and the game was a mere 46 seconds old when Guido Burgstaller had the first chance, but he slid just past the ball at the last moment. However, it took just six minutes to open the scoring; on his return to the starting line-up, Christoph Knasmüllner delivered a high cross towards the back post, where Marco Grüll was waiting to head the ball powerfully down and back up into the net, 1-0 (6’)! That goal only acted as a wake-up call for the hosts though, and they created several chances in the next 20 minutes or so. It took until the half-hour mark for the next chance for the boys in their Blue & Red away colours, when scorer Grüll so nearly laid on an assist for Burgstaller, but his square ball was just missed by the advancing striker (30’). After dominating for much of the first half, it was unfortunately not against the run of play, when former Rapid man Lukas Sulzbacher helped WSG get their equaliser. A throw-in was flicked on towards Thomas Sabitzer, who fired a low shot into the corner for 1-1 (37’). With no other major moments coming in the first half, the teams went in at the break level. 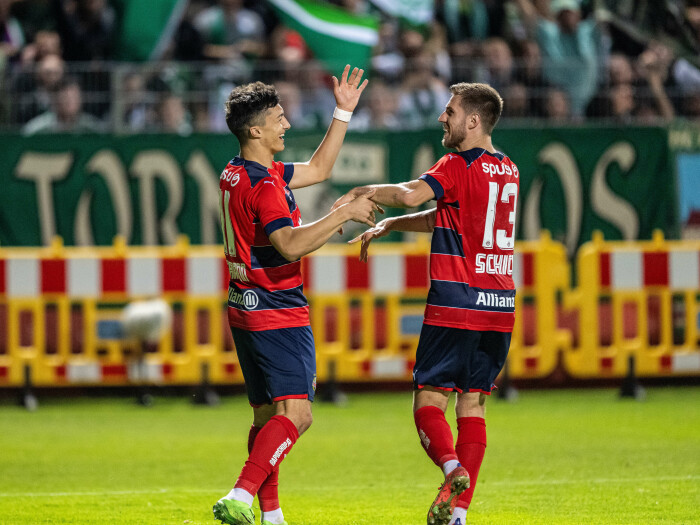 Zoran Barisic immediately made a change for the second half, as Christopher Dibon came on for Maxi Hofmann (46’). After our lightning start to the first half, this time it was almost the Tyroleans who took the lead with an early chance (47’). After a Thorsten Schick free kick, there was then a chance for Aleksa Pejic, who could only get to the ball with the back of his head and therefore couldn’t steer it on target (48’). After Christopher Dibon went to ground in our penalty area, a Wattener tripped over our captain - the referee decided on a penalty for the hosts, but luck was on our side in the end, as Thomas Sabitzer blazed the spot kick well over the bar (54’)! We got back into the game a bit more after that, and a low shot from Burgstaller had to be deflected into the side-netting (59’) before Ante Bajoc had a go with a shot which ended up being a bit too central (61’).

Ferdy Druijf and Roman Kerschbaum came on for Christoph Knasmüllner and Aleksa Pejic (63’), and just over ten minutes later we went close to a second goal: Grüll hammered a free kick flat towards the far post, and keeper Ferdinand Oswald had to parry it behind to safety (74’). From the resulting corner, though, we would go back in front! Burgstaller headed goalwards where Kerschbaum could stoop to head home his first goal in a Rapid shirt, 2-1 (74’)! Minutes later, Burgstaller intercepted a pass from the WSG keeper, calmly passed across to Druijf, and our next substitute could find the net with ease for 3-1 (76’)! Berni Zimmermann and Martin Koscelnik then took to the field for the closing stages (82’), and with his first touch of the game, Zimmermann headed in a Patrick Greil cross to make it 4-1 and kill the tie (84’)! The game was now comfortably in our hands, and Schick almost made it 5-1, only to see his shot tipped onto the crossbar (89’), but no more chances fell to the home side, so we were able to come through this tough Round of 16 tie with a big win!

As a result of the 4-1 victory, we sealed our place in the quarter-finals of the UNIQA ÖFB Cup, and could therefore enjoy Zoran Barisic’s third debut in the Rapid dugout properly: well done lads! Now we have to look back towards the Bundesliga, as our next game is against SK Austria Klagenfurt at the Allianz Stadium on Saturday.