Chances aplenty in win against Mattersburg 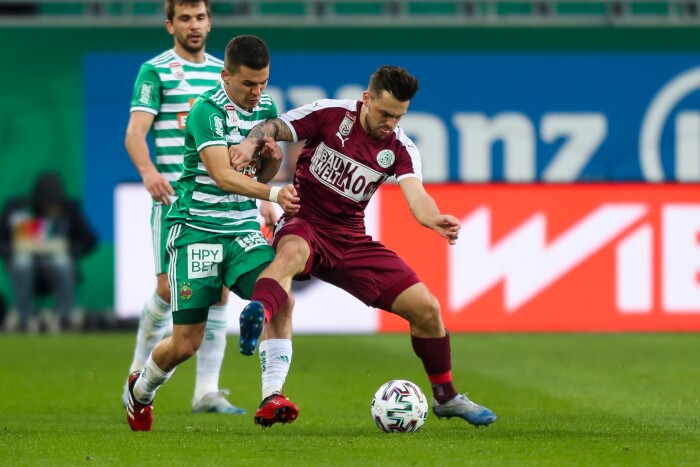 Rapid headed into the last home game of the regular league season without any big surprises in the line-up. Max Hofmann returned to the bench after an illness last week, Thorsten Schick joined him, continuing his recent comeback, and Ercan Kara was also on the bench following his appearance as a super-sub last weekend. We welcomed SV Mattersburg to Hütteldorf in good shape then, looking to strengthen our hold on third place in the league, but the Burgenland side themselves were unbeaten in 2020.

With the game underway, Taxi Fountas got a cross in early for Thomas Murg to prod towards goal, but stand-in keeper Casali held on (2’). Mattersburg had an early chance of their own, Kvasina rattling the crossbar from a corner kick, Nemeth steering the rebound wide (7’). Fountas and Murg then combined once more outside the box, the latter lashing a half-volley towards the bottom corner and forcing a fingertip save from Casali (9’). There was plenty of action in the early stages, and so it continued; Richi Strebinger denying a Pusic from a point-blank header before Rath prodded another rebound wide (13’), and Pusic tested Strebinger again seconds later with an effort on goal (14’). The opener was surely coming, and it was Rapid who found it, Stefan Schwab heading a fine Murg cross beyond the wrong-footed keeper for 1-0 (15’)!

After the goal things settled down, but even then not for too long, and the action remained exciting to watch, even if it wasn’t always what the home fans wanted to see. A cross into the box flicked off a Rapid head, and Mahrer struck it first time, the ball just evading Strebinger's efforts to keep it out of the net (37’). The Green and Whites weren't flustered by being pegged back at 1-1, and we immediately took the initiative once more. On a quick counter, Murg cut back behind a defender cleverly and had his shot tipped just beyond the far post (39’). The attack deserved a goal, and Rapid could have had the ball in the net soon afterwards too, firstly from Schwab’s volley inside the area (43’) and then when defender Nemeth sliced a clearance off his own goalpost (44’). The ball stayed out though, and right on the stroke of half-time Fountas had one more huge chance, but he shot just wide when bearing down on goal (45’). Breathtaking stuff, but still 1-1 at half-time! 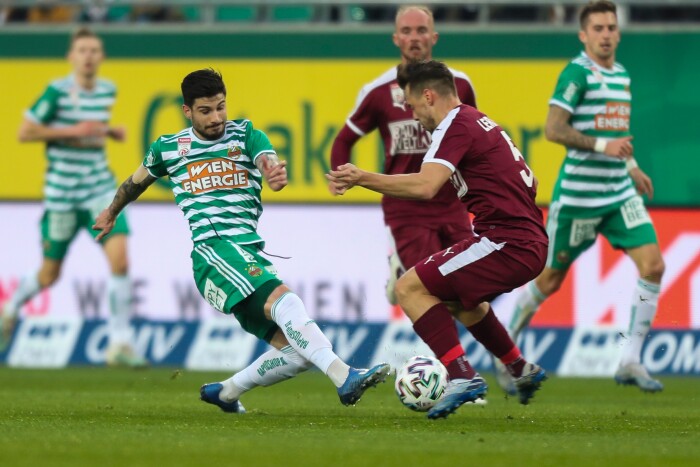 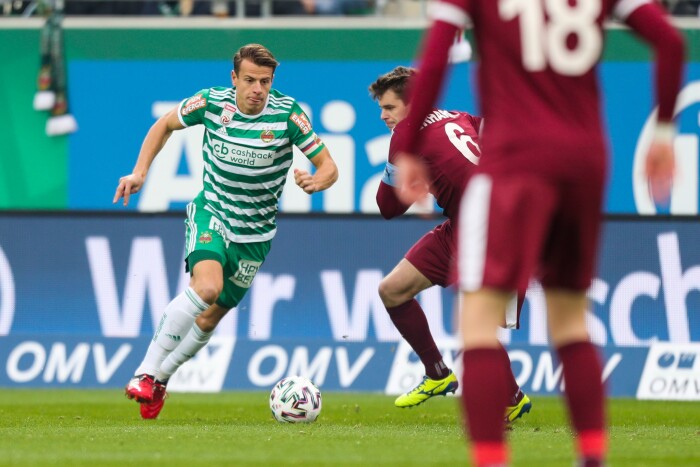 You might have expected the half-time interval to disrupt the flow of the game, but it certainly didn't do that! Rapid grabbed their second goal before all of the 14,000 fans had even returned to their seats. Taxi Fountas looked up from the edge of the area and picked his spot in the far corner, curling a lovely shot beyond Casali for 2-1 (46’), and making up for his first half miss. Even in the moments that followed, Rapid had chances to seal the deal; the effective Murg was denied in a one-on-one situation, and (51’), before slamming a fierce effort off the post (56’).

Mattersburg had certainly played their part in this entertaining game, but after the hour mark they didn’t threaten much more, only a deflected strike from Höller went close to the target (63’). Who else but Murg would have our next chance? His curling shot was just wide once more (75’), but the third goal was close. Eventually we had the two-goal cushion our performance had merited, Christopher Dibon playing a well-weighted cross for captain Schwab to head in (78’). The celebrations were muted after a clash of heads between Schwab and Höller, but it thankfully only caused a temporary headache for the talismanic Schwab.

That goal killed off the tie, and the end was not as frenetic as the first 75 minutes had been, so Rapid cruised home with a 3-1 win and three more points in the fight for third place. Next Saturday sees the conclusion of the regular season, and it’s a straight fight for that spot in the top three as we take on Wolfsberg!