Rapid finish with a flourish to win against WSG 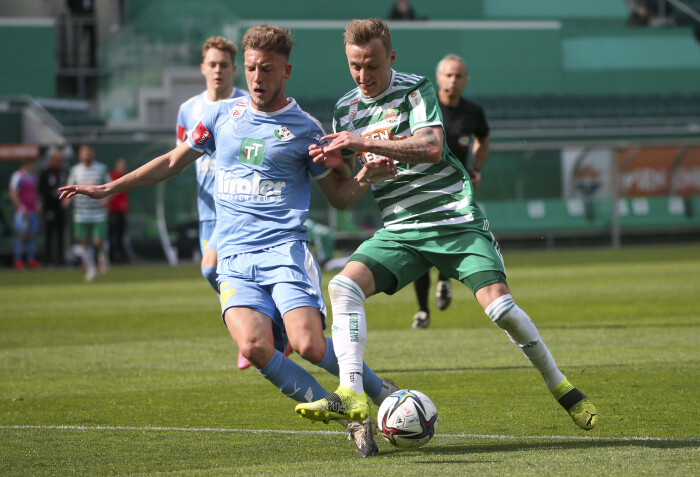 The contest was quite close, but the scoreline was not.

In order to put to bed our recent struggles against WSG, only a win would really do on Sunday. After dropping five points to the Tyrolean side during the regular season, it was time to claim victory at this vital stage of the campaign. The line-up was declared as a 4-2-3-1 formation, but in reality it was rather more fluid owing to the rotations made given that it was game number three within a week. Kelvin Arase and Marcel Ritzmaier took up the wide positions in midfield, and Christoph Knasmüllner occupied his favoured position in the centre, providing support for Ercan Kara up front. The Green and Whites had their sights set on the win, but we had to go and get the job done.

It took us just 120 seconds to create the first chance of the game; Ullmann’s dangerous ball in was aimed at Arase, but it was just out of reach of his sliding attempt (2’). That opening did send a message as to what type of game we wanted though; Rapid were keen to make quick passing moves, whereas WSG were sitting back and waiting for chances on the counter. Frederiksen did get in through a gap in our high defensive line early on, but any danger was quickly snuffed out by Strebinger’s reaction stop (5’).

Despite that early warning signal, our three-pronged attack pushed forward again with Kara at the head; and when he squared the ball across the box towards Arase, it didn’t quite reach its intended target, but instead Behounek got a touch and prodded the ball into his own net for 1-0 (21’)! Sadly Max Hofmann’s day was done earlier than planned, a muscle injury saw him replaced by Leo Greiml before half an hour was up, and after that point most of the action at either end was broken up before the ball reached the penalty area. A couple of chances near the end of the half threatened to double the advantage, but after Arase’s pass found Kara, the final shot was too close to the keeper (41’), and when our striker did find the back of the net seconds later, the flag was up for offside, so it remained 1-0 at the interval. 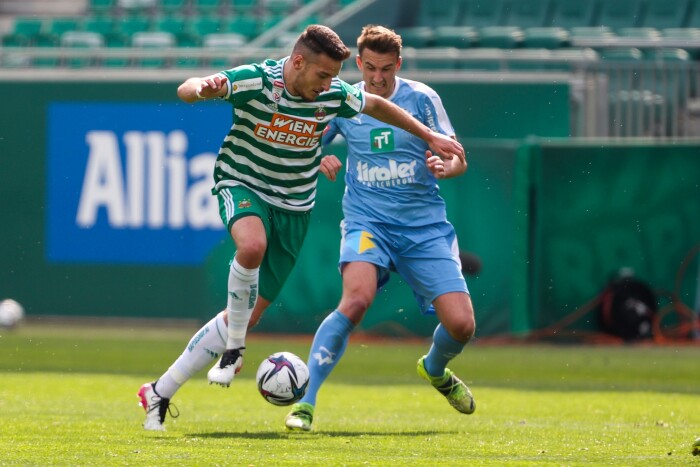 Kara played a huge part in the win, with two assists and a goal. 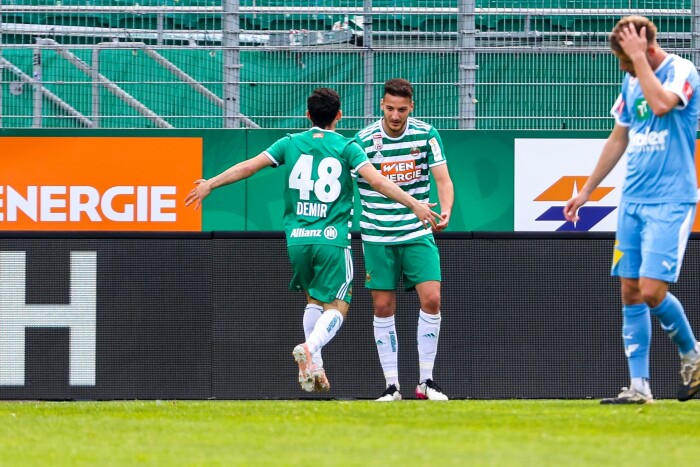 A well-worked corner got us going in the second half; Ritzmaier played it short to Kara, who in turn picked out Knasmüllner lurking near the edge of the box, he fired powerfully towards goal, but the shot rose just over (46’). Ljubicic was the next to try his hand from the edge of the box (56’), but although his effort was on target it didn’t trouble the visiting keeper too much, and we remained in the hunt for a second goal to calm any nerves.

Despite never really looking like conceding, the events of the final phase were still a pleasant surprise that was worthy of the legendary status of the Rapid Quarter-Hour. First up, a beautiful long ball from Barac met the run of Kara perfectly. His square-ball found Knasmüllner in an excellent position in front of goal, but he scuffed his contact agonisingly into the arms of the keeper (76’). The introduction of Yusuf Demir and Thorsten Schick brought about the right conclusion in any case.

Once more the hard work was done brilliantly in the box by Kara, and when he fed the ball to Demir the substitute only had to keep his cool and take the final shot to put us 2-0 up (81’)! Moments later in the box it was Demir again, dummying one way and the other to leave the defenders hopeless, and once more slotting home to truly kill off the game - 3-0 (84’). We kept up the sudden scoring rhythm too, as Schick passed low across into the area for Kara to sweetly back-heel into the bottom corner and score the goal his performance deserved - 4-0 (86’)! That left us with an extremely good looking scoreboard, but more importantly a first win of the season against WSG, and three more points to keep us second in the table. LET’S GO BOYS!