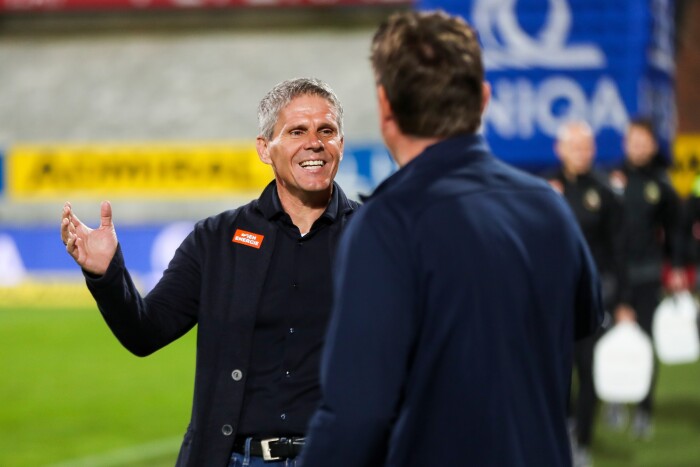 A balmy autumn evening awaited our team in the 2nd round of the UNIQA ÖFB Cup on Thursday, as Rapid made the short trip south to play Admira. After a mixed week last week, it was now time to get back to winning ways and find that feel-good factor again. The start of this year's Cup season had been flawless, but now, as in previous years, a Bundesliga team awaited the Green and Whites in the second round. The explosive nature of this duel was already evident in the last encounter just a few weeks prior, but for this knock-out game the cards were reshuffled - and as is often said, the Cup seems to have its own set of rules.

The return of the injured Robert Ljubicic and Taxi Fountas was a particularly pleasing note to start the evening. Didi Kühbauer again relied on Pauli Gartler in goal. Max Ullmann, Max Hofmann, Leo Greiml and Filip Stojkovic were responsible for snuffing out the opponent's attacks. Emanuel Aiwu and Robert Ljubicic started in the defensive midfield, and Marco Grüll, Taxi Fountas and Thorsten Schick were tasked with supplying the passes to our lone-striker Ercan Kara.

Even before kick-off you could almost imagine this was a home game for our Green and Whites, as the fantastic support of the Rapid fans was clear to see and hear for all at the BSFZ Arena. Both teams set a high tempo right from the off. Luck was on our side in the first few minutes when Admira missed a glorious chance for the first goal, but Aiwu was able to clear the danger at the last second against his old club (8’). The next chance was a good counter-attack from Rapid, Ljubicic sent the ball to Fountas with a flick from the outside of the foot, but the resulting long-range shot was well off target (14’). The Hütteldorf side got more and more into the game and pushed their opponents back into their own half. In the 38th minute the first real shot on goal followed, and what a shot it was! A seemingly cleared cross from Stojkovic landed directly at the feet of our advanced full-back Max Ullmann, who didn't hesitate and instead catapulted the ball powerfully on the half-volley into the bottom corner - A DREAM GOAL; 1-0 to Rapid! It really was a stunning low strike, which was rewarded with chants of "Magic SCR" from the many away fans in attendance. There was a brief moment of shock when the ball found the back of the Rapid net, but thankfully it was the outside-netting and something of an optical illusion, so the team went into the dressing room with a narrow lead. 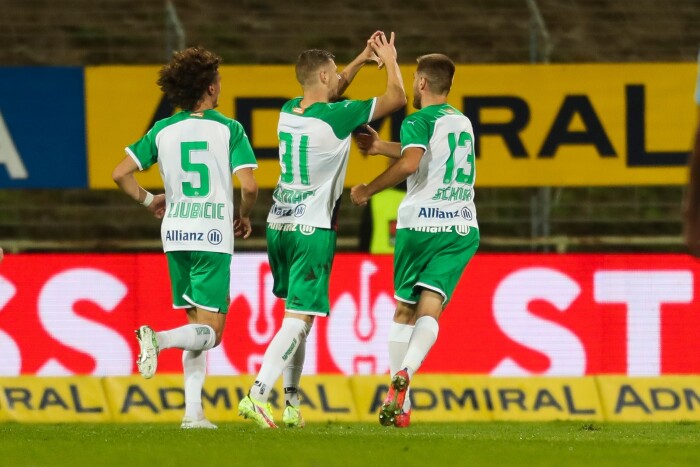 Max Ullmann gave Rapid a first half lead with a superb strike!

After the break, both sides pushed the game back and forth, but there were no big moments in either penalty area. In the 61st minute, a double substitution was made to get the game going again: Petrovic replaced Aiwu, and Arase came on for Schick. Immediately after the substitution, however, a goal came out of nowhere: Admira’s Mustapha broke through to get on the end of a bouncing long ball into the box, and left Pauli Gartler no chance with his neat finish, handing the hosts an equaliser; 1-1 (63’). Rapid's response was not long in coming. In the 69th minute, a Grüll free kick just missed the target. Then the next big moment, Ljubicic with a teasing cross into the busy area, Kara got there with his head, but the ball just wouldn't cross the line (70’). After a perfectly executed corner kick by Grüll, Kara tried again with his head, but the opponent's keeper came up with one of several excellent stops (82’). Fortunately, when Admira then had the ball in the net once more, it didn’t count because of a clear offside (83’). Then came the next huge chance for our team, when Arase forced goalkeeper Leitner into yet another brilliant flying save with a clever flicked-on header (86’). Only three minutes later, Kara had the winning goal at his feet yet couldn’t score, and Ullmann even tried again from distance as Rapid threw everything at their opponents, but extra time could not be prevented. 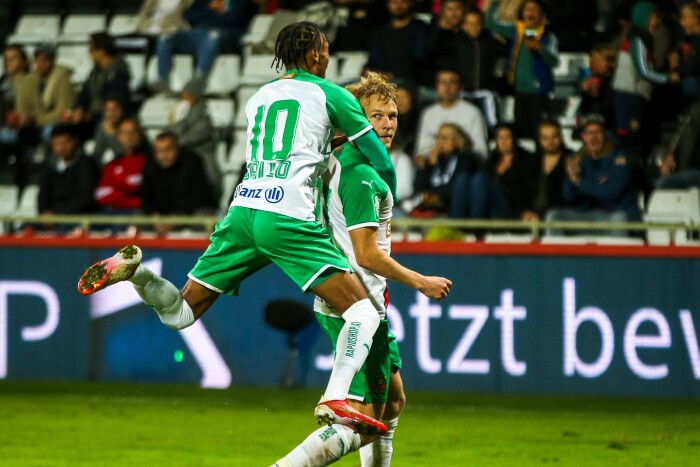 Fountas and Kara made room for our newcomer Thierno Ballo, who celebrated his debut in a competitive match. As the game progressed, more and more emotions spilled over onto the pitch, but only the Hütteldorfers took the initiative in attack. Rapid received an unusual indirect free kick on the edge of the Admira six-yard box, but Ljubicic hammered it only into the block of a defender (100’).

The last 15 minutes also started with a lot of pressure from the Green and White point of view. Then the decisive moment: After a clear foul in the penalty area, there could only be one correct decision: Penalty for Rapid! Grüll took a run-up, showed nerves of steel and converted the penalty calmly-as-you-like for the lead, 2-1 to Rapid (110’)!!! After pulling ahead again, Jonas Auer and Srdjan Grahovac were also given a taste of Cup action, as Max Ulmann and Robert Ljubicic were given a well-deserved break (112’). In the last minute, our debutant Ballo had a big chance in a one-on-one with the keeper, but the attack was blocked (120’).

After 121 long minutes, Rapid had earned their place in the Last 16 of the UNIQA ÖFB-Cup, having dominated the game. Well done lads! Now it’s already time to focus on recuperation before the next big Bundesliga game against Sturm on Sunday.