After an intensive, but ultimately victorious midweek run-out in the cup, the next big game was already on the cards for this Sunday: In the 9th round of the Bundesliga we welcomed SK Sturm to Hütteldorf. The guests from Graz travelled to Vienna with a lot of self-confidence, sitting comfortably in second place in the standings. From our side, the traditionally fiery duel was even more significant this time around, as much-needed points and placings were at stake in the Bundesliga table. Before kick off, it could have been described as a picture-perfect day: Fantastic temperatures, a stadium atmosphere to give you goosebumps and, as always, awesome Rapid fans. Conditions were ripe for a special Sunday of football for Rapid, but unfortunately things didn’t go to plan.

To the teamsheet: The Rapid goal was again guarded by our number 25, Pauli Gartler. In front of him, our captain Filip Stojkovic led the defence alongside Emanuel Aiwu, Leo Greiml and Max Ullmann. Dejan Petrovic and Robert Ljubicic made up the defensive midfield, while Kelvin Arase, Christoph Knasmüllner and Marco Grüll were responsible for offensive creativity behind lone striker Taxi Fountas.

Rapid started off on a solid footing; as early as the fourth minute Stojkovic played a pinpoint cross to Fountas, but the opponent's defence was able to clear at the last moment. After ten minutes the first real chance fell to the home side: Fountas advanced towards goal and took aim from the right, but his low strike whistled just inches past the far post (10’). Five minutes later Grüll skilfully got away from two opponents, before his almost perfect delivery was just a touch too deep for Arase to control (15’). In the 26th minute, the ball was in the back of the net: Our defender Emanuel Aiwu was all the way forward, and was in position to head home a Grüll free kick nicely, but unfortunately the goal didn’t stand as he was just offside. Sturm's response was swift, yet Pauli Gartler was up to the task with a brilliant save from the opponents' first real shot on goal (32’). Six minutes later came the shock moment for the home fans: Sturm scored out of nowhere through a quick attack which left Yeboah with a simple tap-in. It was time to keep our heads up and push on, however the half time whistle came before Rapid had mustered a fight back, and so the team went into the dressing room with a narrow deficit. 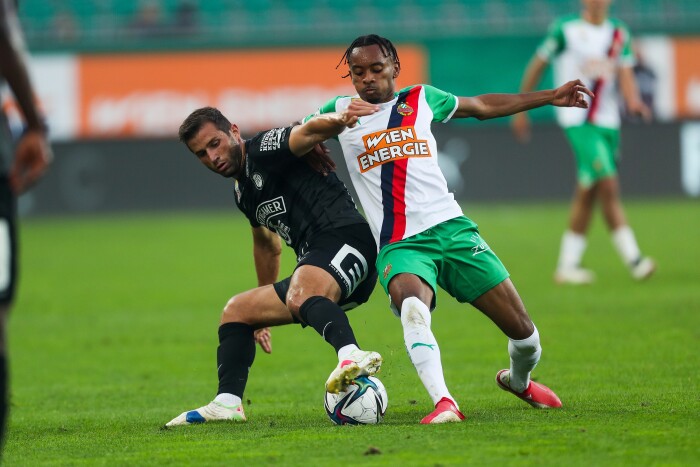 Thierno Ballo made his Bundesliga debut in Green and White against Graz on Sunday.

Our team came back out unchanged for the second half, but the Green and Whites made their presence felt in the first few minutes: Grüll left the Sturm defenders no chance with his footwork, but his shot on goal was deflected and therefore ended up just over (47’). The guests also added to their tally of shots, luckily Kiteishvili’s effort came back off the crossbar (49’). Rapid kept up the back and forth trading of chances thanks to an almost unstoppable Grüll shot, but Fountas was agonisingly centimeters away from reaching the rebound off the keeper (53’). Didi Kühbauer looked for some new momentum on the wing; Arase went off the field and so Thierno Ballo made his Bundesliga debut in Green and White (56’). Only a few minutes later, Fountas had Rapid’s equaliser on a plate, but our number 9 did not catch Grüll's square ball quite right and saw it sail over the bar from close range (63’).

Thorsten Schick replaced Knasmüllner in the continued search for a way back into the game (67’) - but only four minutes later Gartler was fishing the ball out of the net for the second time after a corner kick was headed in to make it 2-0 to Sturm (71’). Ljubicic had a go at reducing the deficit with a free kick, but the goalkeeper just managed to keep it out of the top corner (80’). Out of nowhere, then came a third goal for the guests. After a quick series of passes, the final close range shot was unstoppable for our number 25: 3-0 (82’). In the final minutes Grahovac, Auer and Kitagawa were brought on as Ullmann, Ljubicic and Fountas made way (83’), but even three new faces could not change anything by that point.

It was a painful way to end the weekend, but our focus has to switch immediately to the task ahead, because we’re off to London for the next group game in the UEFA Europa League on Thursday, and we’ll need to pick ourselves up again quickly for that exciting challenge!