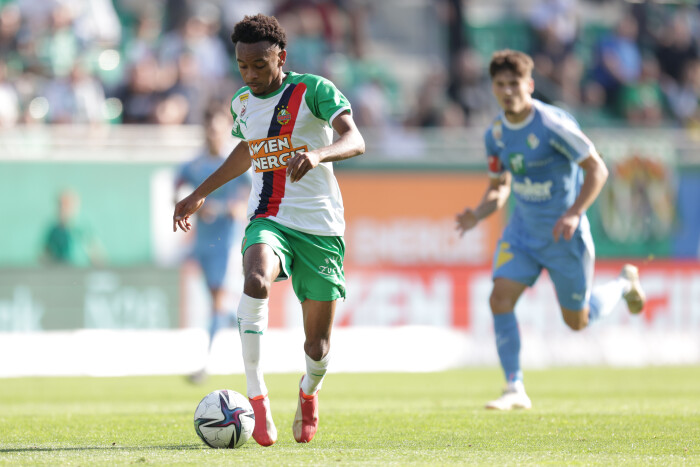 The 10th round of the Bundesliga was to be the final game before the October international break, and we welcomed WSG Tirol to the Allianz Stadium, as bright autumn weather shone down on Hütteldorf on Sunday. It was a very special game for our head coach Didi Kühbauer, who celebrated his 100th league game in charge of Rapid. Clearly, the only appropriate way to celebrate the occasion would be with three points!

The match was also a special one for our number 10, Thierno Ballo, who made his debut in the Rapid starting XI. The rest of the starters had a familiar look to them, with Pauli Gartler in goal behind a back four and two defensive midfielders. Alongside Ballo in the attacking midfield three it was Marco Grüll and Taxi Fountas, with Ercan Kara leading the line in the hunt for goals.

It took just four minutes for Ballo to make an impact, but his early shot sailed just wide as Rapid started brightly. Two minutes later Kara’s corner found Max Ullmann, and he confidently had a go from long range, unfortunately this effort was also off target (6’). The home fans enjoyed the first goal of the day after 17 minutes; shots rained down on the WSG goal, and after a Ballo effort was parried, Kara dived to head into the net. The celebrations were soon halted though, as the goal was chalked off for a foul by Kara in his efforts to reach the ball first.

The Green and Whites were well on top and kept going for that all-important first goal. Hofmann headed inches over the bar from a corner (33’), but then, after dominating the game, we fell behind. A cross was headed home by Sabitzer, and after a VAR check for offside the goal stood and we somehow trailed on the score board (38’). It was a tough situation for the boys to find themselves in, but undeterred, Rapid struck back before the break; Ballo crossed to Grüll, who squared selflessly for Kara to sweep the ball in and level things at 1-1 for the interval (47’). 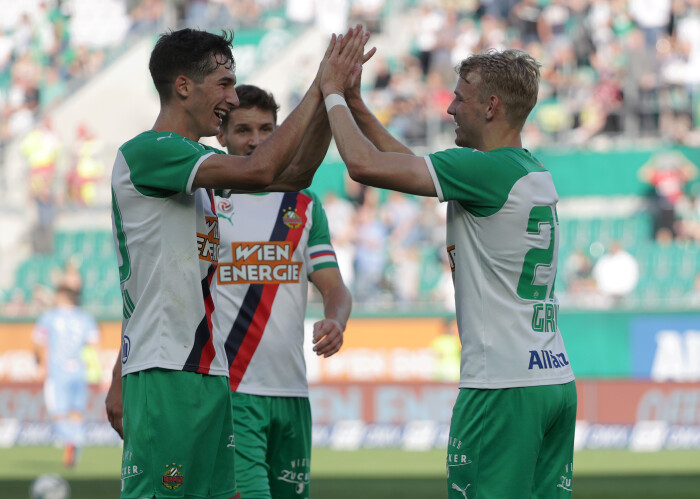 As well as Ercan Kara’s hat-trick, Marco Grüll & Christoph Knasmüllner were also able to get on the score sheet! © GEPA

The second half could not have started in a better fashion: After an excellent ball in, Stojkovic headed onwards to Kara, who skilfully nodded the ball into the WSG goal from close range - Rapid hit the front just seconds after the restart (46’)! Only five minutes later, Fountas showed up with a well-judged lob that missed the goal by just a whisker (51’). Jonas Auer came on to bring some fresh impetus and give Maxi Ullmann a rest (57’), and only three minutes later, Rapid were awarded a penalty after a clear foul near the corner of the box. Our number 29 took the ball and dispatched it neatly to cap off a hat-trick; 3-1 (60’)!

If we hoped things would carry on in the same vein, well, they did indeed! From the 66th minute onwards we had a man advantage after a red card for the guests, and after 71 minutes, Ballo’s starting debut came to an end as he made room for Thorsten Schick. At the start of the Rapid quarter-hour, the Green and Whites added goal number four! Kara this time played the assist for Grüll, who hammered in his shot, beating the keeper with pure power from inside the area (76’)! After a triple-substitution for the home team, WSG then pulled one back out of the blue, as they fired home a goal following a corner kick (82’). Our team remained firmly in control though, and first Auer had a go after a nice move in the final minute, only for the away team to come up with a vital clearance. Never mind, Grüll soon played a perfect cross in for Christoph Knasmüllner, who was able to fire in for 5-2 (90’+3)!

The Green and Whites were rewarded for a strong performance on the day, and in the end we could enjoy a few important milestones, and three very important points as well. Strangely enough, Rapid II also managed a 5-2 win this weekend, so it’s an odd score, but one that we could get used to! All in all, it was a fine weekend to put us in the right mood going into the international break. BRAVO RAPID!