There’s good news to report from SK Rapid's winter training camp, which has been taking place at the Cornelia Diamond resort in Belek, Turkey, since January 15th: Centre-back Maximilian Hofmann, one of the current captains of Rapid’s senior squad (alongside Christopher Dibon, Filip Stojkovic and Srdjan Grahovac) extended his contract, which originally was due to expire at the end of the current season, by three more years to run until the end of the 2024/25 season!

The 28-year-old Viennese defender is a true Green & White veteran, and came through almost all of SK Rapid's junior categories. In January 2013 he was promoted from the former Rapid amateurs to the professional squad by then head coach Peter Schöttel, and celebrated his competitive debut under his successor Zoran Barisic in May of the same year. In the meantime, he has made a total of 218 appearances across league, ÖFB Cup and European competitions, scoring exactly ten goals, most recently the decisive goal in our 2-1 home win in the UEFA Europa League against Dinamo Zagreb. Broken down by competition, the statistics are as follows: Bundesliga: 158 games/3 goals - ÖFB-Cup: 24/4 - European Cup: 36/3.

Zoran Barisic commented on the early contract extension: "I have been able to accompany Maxi Hofmann's career for more than a decade now, with only a short interruption, and I have already had him under my wing as an individual coach and as Rapid II coach. I therefore know him and hold him in high esteem, and I am delighted that our path together will continue at least until the middle of this decade. Hofmann identifies one hundred percent with our club, gives everything in every training session and game, and is an extremely reliable defensive player who is also always good for creating some danger in the opponent's penalty area."

Maximilian Hofmann himself spoke about the continuation of his career at SK Rapid: "I am glad that the issue was settled so early and I am very happy that I can continue to play for my club and my colours. I think that we are currently on a very good path as a team, I look forward to the many challenges in the coming years and can promise all Rapid fans that I will continue to dedicate everything to the success of our club." 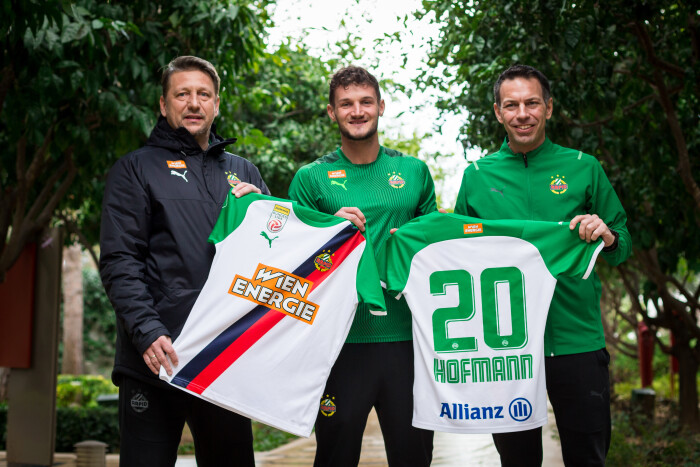