The 335th Vienna Derby ends in a draw 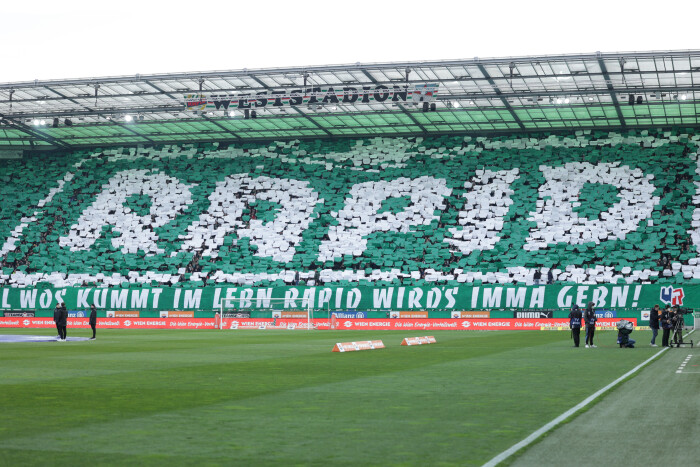 26,000 fans were in the stadium for Sunday’s game. Thanks for your amazing support! © GEPA

Sunday’s derby against our city rivals was bound to be a special occasion. Not only had there been no derbies without fan restrictions for over two years, but Rapid had not faced-off against Austria in the ADMIRAL Bundesliga’s Championship Round since the new league format came in a few years ago. This time though, both sides were fighting hard for the European places inside the top six, no wonder then, that the Allianz Stadium was sold out on Sunday evening, packed to the rafters with 26,000 football fans eagerly awaiting three points on match day 24.

Head Coach Ferdinand Feldhofer led his side into this game on a three match winning run, but Austria also came in with confidence having won their last five. The guests began the day just the one point ahead, but Rapid’s goal would be to leapfrog them in the table, and end a recent run of five consecutive Vienna Derby draws. The men tasked with getting the goals would be Ferdy Druijf and Berni Zimmermann, assisted by Yusuf Demir and Marco Grüll in midfield, buoyed by their Austria U21 and senior team call ups respectively. Robert Ljubicic and Dejan Petrovic shored up the defensive half of the midfield, ahead of a back line of Filip Stojkovic, Emanuel Aiwu, Kevin Wimmer and Martin Moormann, with Niki Hedl between the Rapid posts.

Cheered on by the incredible atmosphere of a full house, the Green and Whites started the stronger of the two teams. Zimmermann’s early tackle exemplified the right derby-day attitude, and it began a counter attack with Demir and Stojkovic getting the ball close to the six-yard box before it was cleared (3’). After Moormann took a nasty looking knock, the fans were relieved to have him back on the field after ten minutes, and soon after, Rapid’s intense pressing began to pay off and put the Austria defence on the back foot.

More nice work off the ball from Zimmermann saw Rapid get it back high up the field. He laid off quickly for Demir who took aim for the the far corner, but although keeper Pentz saved the initial shot, the rebound fell only as far as Robert Ljubicic, and the midfielder didn’t need a second invitation to put the ball in from close range. GOAL RAPID! 1-0 up inside fifteen minutes, and the home crowd were ecstatic! The ever-active Zimmermann was the first player into the book after jumping into an aerial challenge (19’), it didn’t work out, but it showed that the young forward is able to hold his own in the physical duels of the Bundesliga!

With a one-goal lead, the Green & Whites weren’t about to take their feet off the gas. Another sliding challenge - this time from Druijf - won the ball back again for Rapid, and Grüll had Demir on an overlap on the left in the area, but rather than shooting he went for a cutback to the man who started the move, but alas Austria came up with the clearance in time (24’).

A VAR check could perhaps have awarded a Rapid penalty for a handball infringement soon after, and with the relief of the decision, Austria also had the fortune of a leveller to come. After being camped in their own half, the visitors scored from their first attack once a dinked cross from the left came towards Djuricin who couldn’t miss from a yard out. 1-1 (28’). A spate of yellow cards then followed for the guests, who pushed the limits to try to get back into a game that had passed them by for much of the first half hour.

They did succeed in turning the tide as the next chance belonged to Austria, yet Keles managed only to head the ball towards home keeper Hedl instead of picking out the empty space in the far corner of the goal (40’). With that miss, the first half came to a close. All-square, yet all to play for, with both teams looking for some second half improvements.. 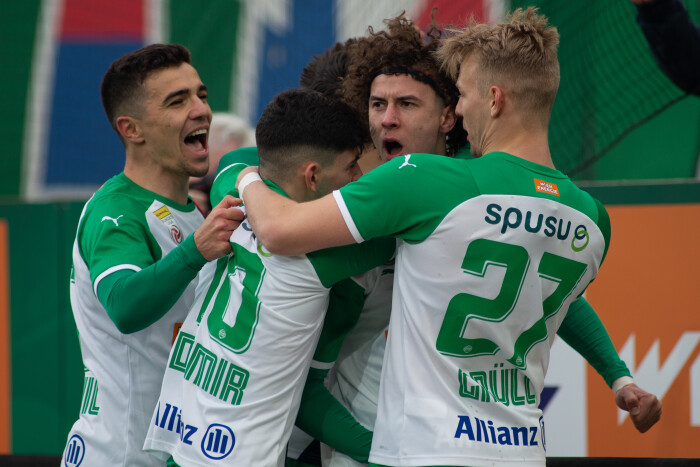 Robert Ljubicic opened the scoring for Rapid with a predatory finish on the rebound! © GEPA

Rapid remained unchanged after the break, but the high energy derby of the first half was nowhere to be seen for the first few minutes, as both sides cancelled one another out until the substitutions took place on the hour mark. Demir was replaced by Thorsten Schick, and Rapid were almost back in front seconds later. Grüll went up for a high ball, and when Pentz failed to gather it cleanly in the air, it fell to Druijf, whose shot hit the bodies in the box rather than finding a gap (65’). Pentz was busy again seven minutes later as Zimmermann fired goalwards from inside the area following a cross, but the Austria keeper blocked well with his legs. That was the young Rapid striker’s last action of the day, an excellent first Vienna Derby, but it was time for Srdjan Grahovac to come on just before the Rapid quarter-hour (73’).

Again the respective qualities of two teams on good runs of form started to cancel each other out, and despite lots of challenges and hard work, chances on goal were getting less frequent. Corner balls and free kicks were leading to little, but it was the guests who went closest in stoppage time, as a curled shot from Fischer went just wide, to the relief of Block West behind the goal. A Marco Grüll set piece would prove to be the last kick of the day, but even his magic foot couldn’t prevent a sixth Vienna Derby draw in succession, and the game finished 1-1.

Nonetheless, Rapid can go into the international break with three wins from the last four games, and off the back of a strong performance, in which everyone gave it their all in front of an unbelievable set of supporters in Hütteldorf, THANK YOU RAPID FANS! After recuperating over the international break (or indeed representing the national team) the team will be back in action on the 3rd of April in Salzburg.