This Wednesday saw Rapid tasked with a Bundesliga home game against SK Austria Klagenfurt on match day 29 of 32. After a battling display against Sturm Graz last time out, this time we wanted all three points for ourselves once again. Assistant Coaches Thomas Hickersberger and Matthias Urlesberger were in the dugout, with Head Coach Ferdinand Feldhofer only allowed to watch from the stands on this occasion. Both the club and the fans were of course hoping for some nice moments on the field, and even before kick off we had one, as the Rapid Special Needs Team and the SNT-Kids were celebrated on the Hütteldorf turf before the match!

From kick off Klagenfurt began well, as they pushed and pressed for every ball, yet after blocking a few shots, including a very early one from Patrick Greil, the first big chance fell for our side: Robert Ljubicic had possession on the byline, fed a pass back to Christoph Knasmüllner who quickly set up Yusuf Demir, but his low shot from inside the box was saved (9’). The guests were well in the game, but it took a while longer for them to test Niki Hedl in the Rapid goal. A long range shot was easily gathered by our young keeper (23’) before a header at the other end went wide from Ferdy Druijf (26’). Klagenfurt keeper Menzel was still the busier of the two, and he had to stop a shot across goal from Marco Grüll, who had run forward on a counter down the left (36’). Menzel was also behind a long range strike from our defender Kevin Wimmer, who wasn’t afraid to have a go from way out, but ultimately didn’t quite do enough with the shot just before the break (44’). The half time whistle blew with the scores still at 0-0, and despite dealing with the visitors’ threats well in the first half, there was more work to be done in the second. 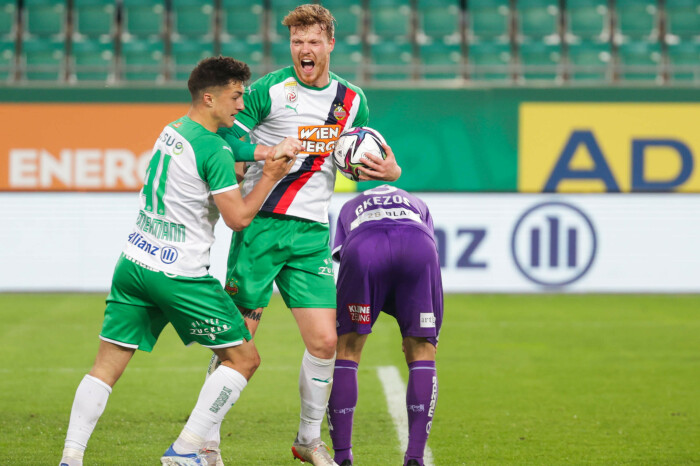 Ferdy Druijf scored a brace, but on the day it wasn’t quite enough for a win.

Thomas Hickersberger opted to switch Dejan Petrovic for Moritz Oswald at half time, so Rapid ran out with a slightly altered line up for the second period. Six minutes after the restart, the best chance of the game came our way. Martin Moormann attacked well down the left, before playing a clever cross towards Demir, who was unlucky to see his shot bounce away off the post (51’). We kept up the pressure from a corner ball shortly after, but Filip Stojkovic’s delivery was headed over the top by Knasmüllner who had worked his way into a really good position (55’). That could have been the opener!

Demir and Knasmüllner then made way for Thorsten Schick and Berni Zimmermann just before the hour mark, but after an open phase of the game with lots of effort and few real chances, it all changed.

As the game headed into the last 20 minutes, the drama was about to step up a gear, and it wasn’t always in a good way. Klagenfurt came forward, and without being in a hugely dangerous position, Jaritz’s shot from the left of the area took a small but crucial deflection off Emanuel Aiwu just as the ball was played, and it snuck in at the near post after it wrong-footed Hedl in goal. 0-1 (70’). Rapid were not going to lie down and accept defeat though, just eight minutes later Berni Zimmermann had the ball on the left, and he was able to pick out the perfect square ball to cut across the visiting keeper and stay away from the defence, where Ferdy Druijf was waiting to tap it in at the back post for 1-1 (78’)!

Unfortunately, the excitement continued, and at the wrong end. Niki Hedl saw red after an unusual clash, when he was hassled on the ball following a routine catch. The Klagenfurt striker went down, Hedl was off in controversial circumstances, and from nothing, it was a penalty to the visitors. Bernhard Unger came on, but his very first action was to pick the spot kick out of the back of his net, meaning that Klagenfurt took a 2-1 lead going into the final few minutes (84’). Yet again, the Green & Whites were able to dust themselves off and gather themselves for another push. With ten men, we lofted a corner ball into the area, and after a bit of head-tennis and with players everywhere, Druijf somehow managed to execute an overhead kick which looped over the keeper and in off the post for 2-2 (88’)! What a fightback from the boys!

The drama finally died down, but not before one last Rapid chance for what would have been a sensational win. From Schick’s corner kick, Zimmermann’s header appeared to be going in, but a last ditch clearance kept it out (92’) and the whistle eventually blew. The spoils were shared after a real battle of a game, especially in the last half hour. 2-2 was probably a fair result all in all, although our boys were left with a few regrets despite their show of grit to grab two equalisers at the end. Nonetheless, it’s another point gained, and we’ll learn our lessons and move on, as we look towards a thrilling final three rounds, including a Vienna Derby in Favoriten on the 8th of May, and a home duel with Salzburg the following Sunday. Let’s finish the season in style!