Exactly a week after a bitter away defeat in Graz, we welcomed the Styrians to the Allianz Stadium on Sunday. In classic April weather, we wanted to exact our revenge and keep the three points in Hütteldorf. In the last match, our team did a lot of things right, but the decisive goal was not forthcoming. This week, however, we would have another chance to add those finishing touches and get the job done. In contrast to the last game, Emanuel Aiwu and Kevin Wimmer (suspended) were missing in defence, but head coach Ferdinand Feldhofer was fortunately able to rely on Maxi Hofmann, who was fit again after his injury. The atmosphere in the stands was very special, as the ‘Tornados Rapid’ celebrated their 25th anniversary with some impressive tifos. With numerous Rapid fans behind them and a Green & White stadium full of fervour, we wanted to secure the win.

Blocked shots from Berni Zimmermann and Filip Stojkovic were the first chances of the game, but in the fifth minute our good start came to a sudden end: Our captain Christopher Dibon unfortunately had to leave the field due to injury after a nasty aerial clash and a bad landing, Leopold Querfeld came into the game in his stead - get well soon Dibi (5’)! The shock of the injury unsettled our game slightly, but Robert Ljubicic was the one who dared to take the next step, but unfortunately his cross into the danger zone was stopped (14’). Thorsten Schick also made a good run down the flank, but Ferdy Druijf was just inches away from reaching the delivery for a header (17’). Tempers flared and the tempo increased, but the next real chance belonged to the visitors; Niki Hedl made a brilliant save to keep the scores at 0-0 though (31’)! The tempo remained high, but the decisive chances were still missing at both ends of the pitch - unfortunately, our final ball in front of goal was still not quite accurate enough. It was a more than competitive first half, and we went into the dressing rooms with the game goalless! 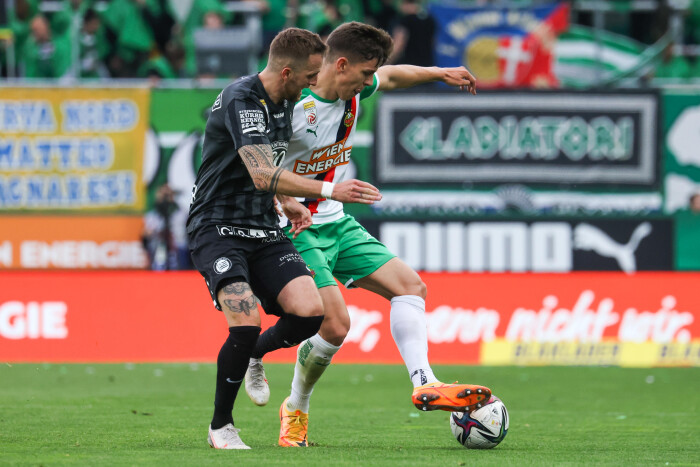 Our team came back out onto the pitch unchanged, and soon after, Filip Stojkovic put in a good cross, but just as in the first half Ferdy Druijf was millimetres away from the ball (48’). In the 50th minute, the game was interrupted for several minutes as two Graz players were treated on the pitch and also replaced due to injuries (53’). The next phase was intense, both teams refused to give the other an inch. Shortly before the beginning of the Rapid quarter hour, the Green & Whites made a triple substitution: Moritz Oswald, Thorsten Schick and Berni Zimmermann left the field and were replaced by Dejan Petrovic, Yusuf Demir and Christoph Knasmüllner (74’). Almost at the same moment, however, there was a very questionable penalty kick awarded to the guests, which they converted to take the lead (75’). The number of fouls then increased on both sides, and in the 82nd minute the visitors were shown a second yellow card - so with ten men on Sturm’s side, the last ten minutes began! The man advantage created a good chance to score, but Maxi Hofmann's shot was cleared at the last moment (84’). In the 87th minute, Niki Binder was brought on to provide momentum in the Rapid attack, as Maxi Hofmann departed the now rain-soaked field (87’). And just one minute later Niki Binder put his stamp on the game: After Yusuf Demir's set-up, Binder passed the ball excellently to Christoph Knasmüllner, who rounded off the move with a cool finish - THE EQUALISER, 1-1 (89’)! Minutes before the end, Ferdy Druijf also had a chance for the winning goal, but put the header just over (94’). Not only did a heavy thunderstorm pass over the Allianz Stadium, but also tempers rose again - and there was a red card for our head coach in the 96th minute. However, there were no more scoring chances, so the game ended as a hotly contested draw.

Even though in the end we couldn’t secure the three points in Hütteldorf, it was still a battling performance from our team. However, there is not much time to analyse and regenerate, because already this Wednesday we will welcome Klagenfurt to Hütteldorf. With today's fighting performance in mind, the best case scenario is to go out and get a home win! LET’S GO!