Marco Grüll's last-gasp goal wasn't enough to mount a comeback away at LASK on Sunday, as Rapid slipped from the top of the table after conceding twice in the first half.

After a successful 120-minute nail-biter in the UEFA Europa Conference League qualifiers, we had to travel to Pasching to face LASK in our return to the Bundesliga, for a battle of the top two. A win in Sunday's game would be needed to keep the top spot Green & White. In addition, it was the first Bundesliga reunion with former coach Didi Kühbauer. Due to the energy-sapping game last Thursday, it was clear that Ferdinand Feldhofer would need to rotate again, so there were eight changes in the starting lineup compared to the last competitive game. Yusuf Demir, Maximilian Hofmann and Patrick Greil had to miss the match with niggling injuries, while Roman Kerschbaum celebrated his starting debut in the league for Rapid. After a strong performance on Thursday, our head coach also relied on Marco Grüll again, who led the Hütteldorfers out onto the Upper Austrian turf with the captain's armband.

As expected, the game began with a lot of intensity from both sides; in the fifth minute Berni Zimmermann hammered the ball just past the goal after a corner kick. Despite our early pressure, it was unfortunately the Linzers who were able to take an early lead as Thomas Goiginger scored in the 10th minute. The goal shifted the game to our half, and gave the hosts a lot of confidence. Rene Kriwak tried to mount a response after a free kick from a difficult angle, but didn't quite catch his effort perfectly to get it on goal (19'). After 25 minutes we had the game in our grasp, Roman Kerschbaum delivered a cross into the penalty area, but Martin Koscelnik put his powerful effort over the top (30'). The next chance, however, was a long time coming, and Niki Hedl had to make a great save to prevent a second goal from the hosts (37'). The save did not help in the long-run though, because in the 43rd minute, the Linzers increased their lead to 2-0 after a through ball found Keito Nakamura in behind the defence. Shortly before the break, Moritz Oswald almost pulled one back with a long-range shot, which was only lacking a tiny extra bit of accuracy (45'). Ultimately, however, we went off at half time trailing by two. 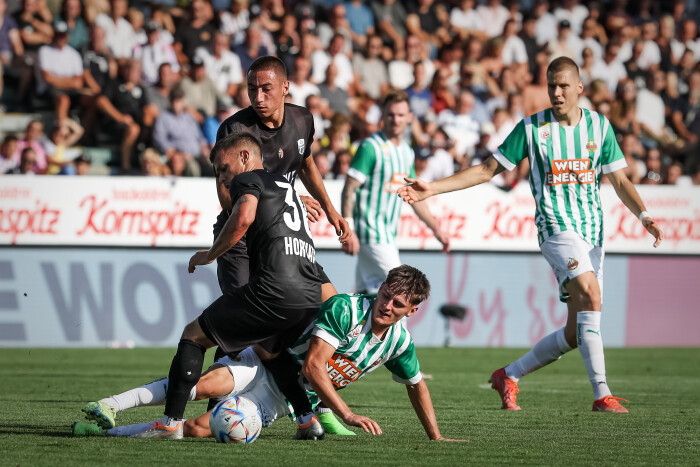 For Moritz Oswald and Co. it was a tough game, and a first league defeat of the season. © GEPA

Our team came back onto the field with two changes, Nicolas Kühn and Guido Burgstaller came on for Roman Kerschbaum and Rene Kriwak. And our number 9 had the first chance of the half, but after a cross from Martin Koscelnik, Guido Burgstaller placed the ball right into the hands of the keeper (54'). Our substitute offensive duo definitely brought us a second wind, and our forward momentum was at times greater than it had been in the first half. The next opportunity came in the 67th minute, but Marco Grüll just missed out on connecting with a sharply placed square ball across the box. Fresh energy was needed again, and so on came Ferdy Druijf, who replaced Berni Zimmermann (68'). Just under four minutes later, it was Niki Hedl again who excelled with a strong save (72'), before Thorsten Schick came on for Martin Koscelnik (74'). It took ten minutes until the next chance was carved out, this time it was Guido Burgstaller with a header over the top; apparently nothing was going our way in the area on the day (84.). In the final minutes, Kevin Wimmer came on for Moritz Oswald (88'), before Marco Grüll had a chance to reduce the deficit in injury time, again missing by just millimeters (91'). A few minutes later, our number 27 did eventually get the ball in, after a well-struck shot went from the keeper's gloves, to the crossbar, and finally across the line and in. 2-1 (93').

With that goal the final whistle sounded, making Grüll's strike purely a consolation goal, and confirming a first Rapid defeat in this Bundesliga season. Heads up Rapid! We'll analyse, regroup, and give it everything to attack in our next game against FC Vaduz on Thursday.